Congressman sleeps on cot to save cash

WASHINGTON (CNN) -- In a time of economic turmoil, most Americans are being frugal with their money, but one freshman congressman is taking cost-cutting to a new level. 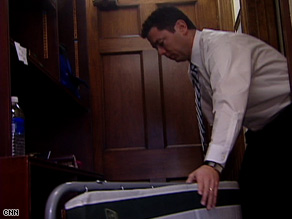 Rep. Jason Chaffetz unfolds the cot that fits into a closet in his office.

Newly elected Rep. Jason Chaffetz, R-Utah, opted out of renting an apartment in Washington, instead deciding on a cot in his office every night.

"I will save $1,500 a month doing this," Chaffetz said. "I get paid a very handsome salary, no doubt about it, but you know, I've got expenses and a future for my kids and my family, too. "

In a stroke of luck, Chaffetz was one of the few freshmen members of Congress to have the chance at an office with a window when he drew number six out of 55 in the office lottery.

His office in the Longworth House Building comes with a half-bathroom, a closet that fits a cot, and what he calls his "breakfast nook" where he stores Fig Newtons, granola bars and mixed nuts.

Watch more on the thrifty congressman »

The building also has a gym with a shower room, where Chaffetz starts his day about 5:45 each morning.

Cutting out travel to and from the office allows Chaffetz more time to serve his constituents and return more of their e-mail and phone calls, he said.

The savings are certainly a plus for the congressman, who has three children to provide for, car payments and a mortgage to pay. But Chaffetz said his decision had a larger meaning.

"We are now $10 trillion in debt. $10 trillion. Those are expenses that have to be paid at some point," he said.

If he can tighten his belt in these tough economic times, Chaffetz said, Congress should be able to as well.

"Our country has to learn to do more with less," he added.

Although he is a relatively unknown freshman in the House, word of Chaffetz's sleeping arrangement is spreading.

Republican Rep. Judy Biggert of Illinois, whose office is adjacent to Chaffetz's, said he isn't the first to sleep in his office, and he won't be the last.

"This is a job that you have to have, really, two homes. One in your district where you're there on the weekends and then one here during the week, and it's expensive," Rep. Biggert said.

"I'm really glad we have a neighbor here to make sure that the neighborhood is safe at night when we're not here," she joked, adding that Chaffetz is actually projecting the right image of the Republican Party by being a "fiscal conservative."

Chaffetz said he is finally getting used to sleeping on his not-so-comfortable cot, but that doesn't mean he rests easy at night.

"My biggest challenge is what goes on in the hallway at night," Chaffetz said. "There's this cleaning machine that comes down the hall at night. And it's got that obnoxious beep, beep, beep."

Despite the din, Chaffetz has no plans to search for another form of housing -- unless his back gives out.

"I've got to keep my back in check, but so far, so good," Chaffetz joked. "But look, our troops are sleeping on a lot worse than this."

All About U.S. House of Representatives • Utah