(CNN) -- President-elect Barack Obama, President Bush and all of the surviving past presidents got together Wednesday for a historic meeting at the White House. 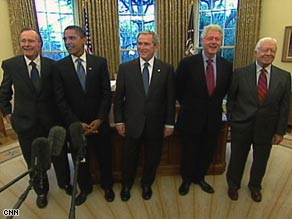 Barack Obama meets with President Bush and past presidents in the Oval Office on Wednesday.

"One message that I have, and I think we all share, is that we want you to succeed. Whether we're Democrat or Republican, we care deeply about this country," Bush told Obama before lunch with the former presidents.

Obama thanked the president for hosting them and said he was grateful for the opportunity to get "advice, good counsel and fellowship" from the group.

Watch what Obama says about the meeting »

Obama's press secretary said the presidents had a "very constructive conversation" and Obama appreciated "the spirit of bipartisanship they showed" in wishing him success.

"The president and the former presidents had helpful advice on managing the office, as well as thoughts on the critical issues facing the country right now. The president-elect is anxious to stay in touch with all of them in the coming years," Robert Gibbs said.

Presidential historian Doug Brinkley said it's "very smart politics for Obama to keep a channel open" with the former presidents.

White House spokeswoman Dana Perino said the last time all of the living presidents got together at the White House was in 1981, and she called Wednesday's meeting a "historic moment."

She said the president was "delighted" to host the luncheon.

"Each of them expressed their desire for President-elect Obama to have a very successful presidency. During the lunch, they had a wide-ranging discussion on many different issues facing the United States, and they all look forward to remaining in contact in the future," Perino said.

The meeting marked the second time Bush has hosted Obama since the election. Obama suggested the meeting with all of the former presidents when he and Bush first met in November.

Perino said earlier she didn't know what they would talk about, but she said she'd love to be able to hear it.

"I'm sure all of us would love to be flies on the wall and listening to that conversation," Perino said during Tuesday's daily news briefing.

Perino speculated that they would discuss what it's like to raise children in the White House and how to protect them.

Brinkley predicted that first and foremost, the presidents would recall what it was like to be president.

"All of them will have little anecdotes. They'll see something in the White House that will bring back a memory. They'll try to bring some levity to this -- make it a very special and engaging and actually a fun afternoon for Barack Obama," he said.

Secondly, Brinkley said, the conversation would probably turn to what's going on in the Middle East.

Brinkley said that all of the men will be on their "best behavior," but, given the personalities at the luncheon, there could be some tension.

"The friction, if there is any, is between Bill Clinton and Jimmy Carter, who are known to not like each other at all," he said, pointing out that the Clinton team did not like Carter "parachuting for peace into Bosnia, North Korea and Haiti" during Clinton's administration.

"That's the relationship that is not warm, it's not good, and if you are a body language expert, you might home in on that," he said.

President Bush may find himself the odd man out at the meeting, at least in terms of popularity.

In contrast, Obama had an 82 percent approval rating.

All About The White House • Barack Obama • George W. Bush