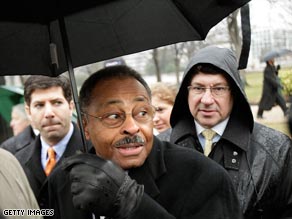 "The question is really one, in my view, of law," Feinstein told reporters in a Capitol hallway.

Failure to seat Burris "has ramifications for gubernatorial appointments all over America," she said, describing him as "a senior, experienced politician."

Feinstein's remarks came shortly after the former Illinois attorney general was denied entry to the Senate chambers as he tried to claim the seat once held by President-elect Barack Obama.

After being denied entry, Burris indicated he's not giving up his fight.

Followed by a swarm of reporters earlier Tuesday, Burris made his way through the Capitol and into the office of the secretary of the Senate on the first day of the 111th Congress.

The secretary of the Senate told Burris that his credentials were "not in order" and therefore he would not be allowed access to the floor.

Nancy Erickson, the Senate secretary, initially rejected Burris' appointment Monday because his certificate of appointment was missing the signature of Illinois Secretary of State Jesse White.

One of the Standing Rules of the Senate says that the secretary of state must sign the certificate of election along with the governor.

White has declined to sign the certificate, siding with some Senate Democrats who say Burris should not be seated because of the cloud over Blagojevich.

Blagojevich, a Democrat, has been accused of trying to sell Obama's open Senate seat. Burris has maintained that Blagojevich's problems have nothing to do with him and the appointment is legal.

Burris has asked the Illinois Supreme Court to require White to sign the certificate, saying he is required by law to do so. The court has not yet ruled on the issue.

Senate Majority Leader Harry Reid said Tuesday that if Burris gets valid credentials, the Senate would "proceed in a manner that is respectful to Mr. Burris, while ensuring that there is not a cloud of doubt over the appointment."

Reid and Sen. Richard Durbin of Illinois are expected to meet with Burris on Wednesday.

In a news conference Tuesday before a flock of observers and reporters, Burris said he was not seeking a confrontation over the seat and would consult with his attorneys to determine his next steps.

One possible compromise could be to allow Burris to be seated in the Senate so long as he agrees not to run in 2010, according to a source.

A senior Democratic source familiar with Senate leadership deliberations said Democrats fear Burris' association with Blagojevich would make him so tainted that he would lose the Democratic seat if he ran in the next election. The source declined to be named because of the sensitivity of the discussions.

Democratic sources cautioned that it's one idea under discussion and that the Democratic leadership hasn't formally settled on making the offer to Burris.

Timothy W. Wright III, an attorney for Burris, did not give specifics about the next move but said he was prepared to take the issue to "the highest court in the land."

He said the rejection of Burris' credentials was "improperly done" and "is against the law of this land."

"The outcome that we will be looking for is that Sen. Roland Burris will be standing on the floor of the Senate conducting his responsibilities as the junior senator from the state of Illinois," Wright said.

Senate Democrats who do not want to seat Burris insist that the problem is with the appointer, not the appointee.

Burris, 71, is one of Illinois' most accomplished politicians, having served as state comptroller and attorney general.

As Burris took his credentials to the Capitol on Tuesday, a media circus surrounded him and documented his every step. The spectacle largely overshadowed the swearing-in ceremony for members of Congress.

One key question is whether Tuesday's scene will help Burris' case by putting political pressure on Democratic leaders to find a solution or hurt him by annoying them.

Jim Manley, a Reid spokesman, insisted Tuesday's events will do "absolutely nothing."

"We are more than able to walk and chew gum at the same time. What happened this morning happened. Now, Sen. Reid and Sen. Durbin will sit down and talk to Burris tomorrow and hear what he has to say."

"This is one battle you don't need. The last thing you and your caucus wants now -- or the new president needs -- is a battle over seating his replacement for the last two years of his term," he wrote in a commentary on CNN.com.

Rep. Jesse Jackson Jr., who was considered a contender for the open Senate seat, also spoke out on behalf of Burris.

"There is a strong constitutional and legal case for his seating," he said. "The longer this process takes, the more racialized this seat becomes and the more difficult it becomes for Democrats to hold it in 2010."