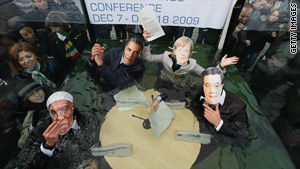 Editor's note: David Frum, resident fellow at the American Enterprise Institute, was special assistant to President George W. Bush in 2001-2. He is the author of six books, including "Comeback: Conservatism That Can Win Again" and the editor of FrumForum.

(CNN) -- I asked a knowledgeable environmentalist earlier this week: "How big a story is the CRU scandal in your community?"

"The e-mails hacked at the Climate Research Unit at [the British] East Anglia University?"

"Ah." He smiled. "It says something that I didn't immediately recognize what you were talking about. I suppose on my side we'd take the same view that the Pentagon took of Abu Ghraib: a few bad apples on the night shift."

Meanwhile, on the right, the story is the biggest scandal since the leak of the Pentagon Papers.

Seemingly unperturbed by the CRU embarrassment, President Obama will shortly jet to Copenhagen to pledge reductions in U.S. carbon emissions. The Democratic majority in Congress continues to work on a cap-and-trade bill.

At the same time, Gallup has recorded an amazing 20 point drop since summer 2008 in the number of Republicans who believe that global warming is occurring. Among Republican conservatives, the drop is slightly smaller -- 13 points -- but that's because so few of them believed in the reality of global warming in the first place.

It used to be said that we were all entitled to our own opinions, but not entitled to our own facts. No more. In modern America, we choose our facts to fit our opinions. Michael Barone drove this point home in a 2008 column for the magazine of the American Enterprise Institute:

Americans' views of the economy are increasingly a function of voting behavior or party loyalty, rather than the other way around. In early 2006, a time of vibrant economic growth, 56 percent of Republicans said the economy was excellent or good, while only 28 percent of independents and 23 percent of Democrats agreed.

Media critics often blame cable, talk radio and blogs for isolating the public into self-satisfied information communities. And for sure, Fox News, MSNBC, Rush Limbaugh and the Daily Show have done good business serving niche markets. But it's a real question: What is cause and what is effect?

Maybe customers always wanted to have their pre-existing opinions confirmed. Notice how often 19th century newspapers had names like the "Clay County Whig" or the "Jacksonville Democrat." What were these old county papers if not the Fox News and MSNBC of their day?

The whole global warming debate has been distorted from the start by intellectual self-ghettoization. Suffused by self-righteousness, the East Anglian scientists felt entitled to twist the evidence and delete the counter-evidence.

But it also helped that they felt sure they would not be caught. They had defined their community in a way that excluded skepticism, that defined skeptics as the enemy, as liars, as Holocaust deniers.

Private e-mails and documents allegedly from the servers at the University of East Anglia's Climate Research Unit, a world-renowned center on the study of climate change, are thought to have been leaked by hackers.

How fast is it happening? How much of it is attributable to human activity? How dangerous is it? How much should we pay to avert or mitigate it? Who should do the paying?

How are to begin to reach conclusions if we cannot even agree on the rules of discussion? The most famous public document on global warming calls itself "An Inconvenient Truth" -- and yet that document itself is filled with untruths, on every subject from sea levels to polar bears. (The bears are doing fine, populations at record levels in the Canadian Arctic.)

In his first book, "Earth in the Balance," former Vice President Al Gore wrote that human consciousness itself may be the most important obstacle to environmental improvement. He spoke more accurately than he knew.

The global warming controversy has been pervaded from the start by the human instinct to divide the world into "us" and "them" -- and then believe only the news we hear from "us."