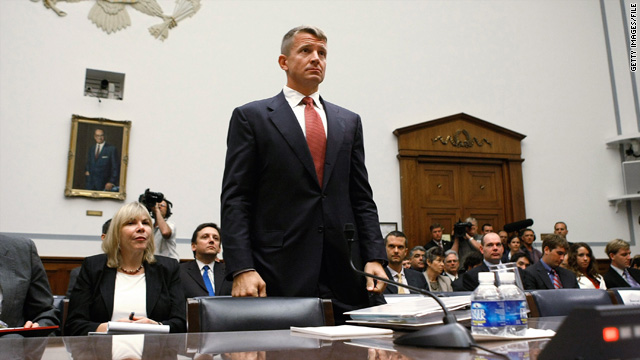 Editor's note: Suzanne Simons is the author of "Master of War, Blackwater USA's Erik Prince and the Business of War."

(CNN) -- There's a lot of head-scratching at the CIA over an article in Vanity Fair magazine that dubs Erik Prince, the founder of the notorious private military contractor Blackwater, a "tycoon, contractor, soldier, spy."

In the piece, he comes across as so entrenched with the CIA that the agency needs him to perform the most sensitive secret missions, including those involving hunting down and taking out al Qaeda operatives.

It's true that Prince, as the sole owner of one of the most well-connected private military contractors in modern history, is in a position of enormous trust within the government. So why is it that he's lashing out publicly at that same government?

Prince, a 40-year-old former Navy SEAL, inherited what he called a sizable amount of money when his father died in the late '90s. He's used that money to help climb to the top of an industry that has mushroomed since the invasion of Afghanistan in 2001.

He built Blackwater, now operating under the name Xe, from the ground up, into a sprawling complex with enough tanks, planes and ammunition to launch a small war of its own.

When President Obama addressed the nation and talked about his Afghanistan strategy, he didn't talk about the shadow army already employed there. There are more private contractors in Afghanistan on the U.S. payroll than there are U.S. troops.

While Prince is a huge beneficiary of U.S. contract dollars, he has long been frustrated by two things. First, he doesn't like the reputation his company has gained, with his men painted as ruthless cowboys -- which some are, but some aren't.

Second, he believes some people in the government just don't appreciate him the way they should.

Prince uses the Vanity Fair article to re-air a lot of his complaints, but the story contains a great deal of classified information, with details about covert programs that involved him.

So does that mean that when convenient, he uses that information to help express his frustration?

Prince unabashedly criticizes parts of the government he doesn't like. And some current and former government sources question whether that's a smart move.

They ask whether, as a man who benefits financially from those contracts, he should really go public with his criticisms of the same government that signs his checks.

Although the CIA has never publicly confirmed Prince's involvement -- it has become common knowledge in the industry he disclosed details of that relationship to me, among many other things, in the book I wrote on him that was published earlier this year.

A lot of those details came up again in this latest article, but Prince went even further this time.

Some former CIA officials are, quite frankly, annoyed.

Not only do they believe that Prince is overplaying any role he may have had or still has with the agency, but they believe he is exploiting it for personal gain.

Few of the sources I talked with wanted their names associated with Prince or his company, but when asked about the Vanity Fair article, CIA spokesman Paul Gimigliano told me the agency has never "talked about what role contractors may or may not have played in ... initiatives over the years. But what no one should forget or overlook is the fact that this agency has the talent, tools, and authorities to go after terrorists, and has done so successfully."

In other words: We can do our own jobs just fine, thank you very much, Mr. Prince.

Another source with former ties to the CIA was outraged by the article, saying that Prince was putting a target on the backs of his own men by alluding to a close relationship between Blackwater and the agency. He fears that all around the world, Blackwater contractors would be perceived as agents of the CIA.

A government official who also thought that the article exaggerated Prince's role in the CIA put it this way:

"Blackwater has good people. They do hard work, sharing the burdens of service overseas. But they're not well-served by strange tales, the kind of stuff you saw in Vanity Fair about miraculous penetrations of hard intelligence targets or private assassination squads with their fingers on the trigger.

"That should all be shelved under fiction, the kind of stories that end with the alarm clock going off and mom calling you down to breakfast," the official said.

What the article doesn't say is just how much of a PR headache Prince has become. One of the lessons that has come with the marriage between private and military is that for a private business, PR can be crucial to your survival; for a covert operation, it can be deadly.

Striking a balance between the two has been the source of much hand-wringing in Washington. But no matter how you feel about private military contracting, it is here to stay.

All of the major U.S. agencies -- the State Department, the Department of Defense, the CIA -- do business with Prince, and all are dependent on contractors in Iraq and Afghanistan.

I flew with Prince to Afghanistan shortly after the shootings in a Baghdad traffic circle in September of 2007 that killed 17 people. Blackwater guards were accused. Four pleaded not guilty and are awaiting trial; a fifth struck a deal with prosecutors.

Prince's frustration was obvious. He felt like he had given everything to his country and that his country had let him down in countless ways; namely by not defending him publicly when his company came under fire after the shootings.

Prince says he does what he does for love of country, but of course, he doesn't do it for free.

His companies have received well over a billion dollars in the process. I asked his spokesperson to comment on concerns that Prince might be jeopardizing agency programs by going public with the details -- after all, he does have a security clearance.

The response was this: "Truth is he is a quiet hero, a great patriot and American. We need more men like him."

The opinions expressed in this commentary are solely those of Suzanne Simons.