Sarah Palin wants to friend you

By Matthew Continetti, Special to CNN 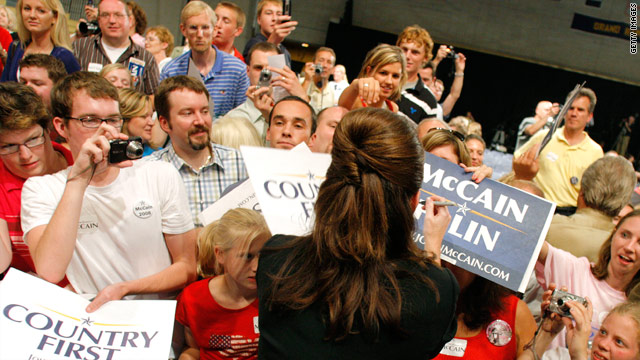 Editor's note: Matthew Continetti is the associate editor of the Weekly Standard and the author of "The Persecution of Sarah Palin."

(CNN) -- Sarah Palin appears on Oprah on Monday to mark the launch of her book, "Going Rogue." She'll follow up with an extensive interview with Barbara Walters, a multicity book tour and appearances on the Fox News Channel and talk radio.

She'll grab plenty of headlines. As you read about Palin's old-media tour, it's important to remember that she's also a pioneer in the political use of new social media. Not that she gets any credit.

Sometimes the most important revolutions are the quiet ones. This is especially true in the case of technology, which has a way of sneaking up on us.

Take cell phones, for example. A decade ago, they were a luxury item. Suddenly, everyone seemed to have one. What had once been a sign of status became commonplace, all with hardly anybody noticing -- and without any central direction.

Such is the case with new media. Back in 2004, when Howard Dean launched his run for the presidency, his campaign's revolutionary use of the Internet to raise funds and organize was considered novel.

Dean took the Democratic Party to the new-media frontier. But it was Barack Obama who settled there. The Obama campaign's use of technology was groundbreaking.

The campaign brass knew that Obama had a special appeal to young voters. They knew that young people communicate through media -- Facebook, MySpace, SMS Text messaging, YouTube, Twitter, podcasts and so on -- that leave the old fogies who typically run campaigns scratching their heads. So they recruited a bunch of tech-savvy youngsters to run Internet operations.

The Obama campaign blog was packed with content. The campaign updated it regularly. One of Obama's top advisers was Google CEO Eric Schmidt.

The Obama team announced Joe Biden's selection as vice presidential nominee through a text message. When he became president, Obama didn't end his embrace of technology. The White House has a blog. Obama records a video edition of his weekly presidential message and posts it on YouTube.

It's not much of a surprise, then, that Obama draws tremendous support from young people. Nor is it a surprise that he's had trouble winning over seniors, who don't normally walk around hip urban enclaves while listening to iTunes and updating their Facebook "wall" on their iPhone Internet connection. The generational divide in American politics is also a technological one.

As the Democratic Party thrived on the new media frontier, the Republican Party stayed behind. The McCain campaign didn't hire a resident blogger until June 2008.

The McCain campaign was based on old-media approaches to politics -- which made sense on one level, since its candidate was in his 70s. Few Republicans knew how to use social media to the party's advantage. The danger was that a GOP mired in old ways of communication would become obsolete.

But then Sarah Palin came along. Palin's encounter with the old media was a disaster. Her interview with Katie Couric went badly. Tina Fey's impression reduced Palin to a cartoon. Palin needed a way out.

By necessity, she's found a way for the Republicans to adopt social media. She has more followers on Facebook than any politician except President Obama. When I checked on Friday, she had close to 15,000 people following her on Twitter.

These platforms allow her to speak directly to her supporters. Palin's experience with old media during the campaign soured her on the old ways of doing things. As she put it in her debate with Joe Biden, she wants to speak to the American people without the "filter" of the mainstream media.

And it seems to be working. In August, in a single Facebook post, Palin did more to shape the debate on health care than any other Republican politician. (I'm referring, of course, to her charge that the Democratic health care bills eventually could lead to government rationing of medical care through "death panels.")

Then, in October, Palin led the way in national Republican support for the insurgent candidacy of Doug Hoffman, the Conservative Party candidate in November's special election in New York's 23rd Congressional District. One Facebook post from Palin endorsing Hoffman started a cascade effect in donations and support that resulted in liberal Republican Dede Scozzafava's withdrawal from the race and Hoffman's razor-thin loss to Democrat Bill Owens.

Meanwhile, Facebook allows Palin to burnish her policy credentials with foot-noted, op-ed length essays on health care, cap-and-trade, government spending and much else. Step by step, Palin is showing other conservatives how to use new media and social networks to their advantage. And no one seems to care.

It would be ironic if Sarah Palin defeated Barack Obama in 2012 using the same tools that Obama used to defeat John McCain in 2008. But then, history is full of ironies, isn't it?

The opinions expressed in this commentary are solely those of Matthew Continetti.