Are Republicans too giddy? 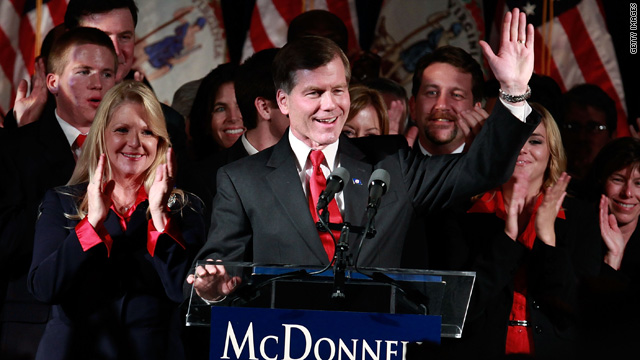 Just two days after the election, Republican National Committee Chairman Michael Steele, who had boasted of the results as evidence of a "Republican Renaissance," issued a stern warning to his colleagues. Steele said that his message for the 2010 midterm elections was that Republicans should remain loyal to the party principles, or "we'll come after you."

Republicans certainly can take some comfort in this election. It is clear that some of the excitement about the Democratic Party has faded since the beginning of 2009. The so-called jobless recovery, with unemployment now at 10.2 percent, is not sitting well with many Americans.

But Republicans should be cautious. Both political parties have a history of over-reading election results and seeing mandates where none exist. The leaders of each party have often thought that the electorate sent a clear message endorsing a new direction in public policy only to learn that voters were relatively comfortable with the status quo.

Republicans have made this mistake at several important moments in recent history. After the 1980 election, Republicans gained control of the White House and the Senate and viewed their victory as a strong endorsement of conservative ideas. The Reagan administration moved to reduce Social Security benefits in 1981 as part of its budget reform. House Democrats seized on the proposal and mobilized against the president.

Reagan learned the public was not so eager to overturn New Deal programs. The administration backed off from the reforms and became more sober about how much of a "conservative revolution" had actually taken hold.

The bruising battle over Social Security in 1981 constituted the first real blow to President Reagan. Budget Director David Stockman observed that after Reagan's loss, "the centerpiece of the American welfare state had now been overwhelmingly ratified and affirmed in the white heat of political confrontation."

In 1994, Republicans made a similar mistake. The GOP felt very strong after winning control of the House and Senate for the first time since 1952. But then in 1995 and 1996, Republicans pushed for deep cuts in domestic spending. President Clinton took a stand against the GOP. The federal government temporarily shut down in a dramatic standoff between the president and House Speaker Newt Gingrich.

While Gingrich would win Republicans support for fulfilling the message of the election, voters turned toward Clinton as they saw stories of visitors arriving at a closed National Zoo or unable to receive their passports.

Elderly voters were not happy about the proposed cuts to Medicare. However, the members of Congress in the Class of '94 refused to allow Newt Gingrich to compromise. The Republican freshman, said President Clinton's senior advisor George Stephanopoulos, "had become Newt's Frankenstein's monster -- and my new best friends."

The public started to turn on the Republicans, questioning whether they were capable of governing. The clash diminished some of the fervor for the GOP and forced it to moved away from many goals.

After the 2004 election, President George W. Bush and Republicans felt emboldened. President Bush spoke about the "political capital" that he now had and how he intended to spend it. But when he tried to move forward with his most ambitious domestic proposal, privatizing Social Security, the plan fizzled. Like Reagan, Bush discovered that he misread the public.

What should concern Republicans today is that last week's gubernatorial elections offer even thinner evidence that there has been a sea change in public opinion. The particularities of two off-year elections make it difficult to connect the results to any national trends. President Obama still enjoys strong approval ratings, and Democrats have solid majorities in the House and Senate, although they face potential losses in next year's midterms.

Only a few weeks ago, a CNN Opinion Research poll found that the number of respondents who had a positive view of the GOP stood at only 36 percent. The Gallup Poll reported in October that 55 percent of those polled trusted President Obama to make changes to the health care system, 48 percent trusted congressional Democrats and only 37 percent trusted congressional Republicans.

Just as important, there is a major disconnect between the kinds of ideas the national Republican leadership has focused on and the kind of pragmatic, centrist campaigns that the Republicans in Virginia and New Jersey ran on. The outcome in New York's 23rd congressional district, where the candidate pushed by the national leadership over the local Republican moderate lost to a Democrat, should be a strong warning sign that Steele might not want to come after Republicans who stray from the party line.

Rather than misread the message of the elections, Republicans must turn to the difficult job of rebuilding their party by finding a new generation of leaders and ideas, while broadening rather than narrowing their reach. If they don't, their response will leave their ranks in even worse shape than before.