By John Feehery, Special to CNN 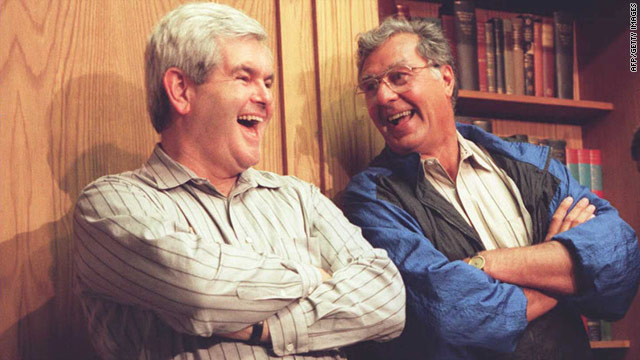 Washington (CNN) -- Usually, on the day before an election, the top story is how the candidates from each party are doing all they can to beat up the other side.

Unfortunately for Republicans, on the day before the most significant Election Day since President Obama was sworn in, the headlines are full of stories about how conservative activists are aiming their attacks at conservative Republican leaders in Congress.

One particularly extreme blogger has called for a purge of all the GOP leaders, which is not particularly helpful on the day before an election.

It all started several months ago when Republican insiders picked a moderate (or liberal, depending on your view of the candidate) to run to replace Congressman John McHugh, who was appointed to be Army Secretary by President Obama.

Like the Spanish Civil War, the battle between Hoffman and Scozzafava quickly became a proxy war for a bigger ideological war that now seemingly rages within the Republican Party. Dick Armey, the former Majority Leader and key leader in the Tea Party movement jumped on the Hoffman bandwagon, while Newt Gingrich, the former Speaker, rushed in to protect the choice of the Republican Party.

Gingrich reasoned that backing Hoffman could cause a bloodbath and lead to the seat being taken by the Democrat. Armey argued back that sending liberal Republicans to Congress was just as bad as sending liberal Democrats.

This squabble attracted the attention of a couple of Presidential wannabes --including the ubiquitous Sarah Palin -- who saw this race as a chance to burnish conservative credentials.

The Obama White House, sensing an opportunity it created itself when the President appointed Mr. McHugh, convinced Ms. Scozzafava to endorse the Democrat after she dropped out of the race. The former mayor didn't like getting called names by a bunch of conservative activities who aren't even from the same region of the country.

Her endorsement of the Democrat has emboldened conservatives even more, and embarrassed GOP leaders who not only lent their reputations to the moderate (or liberal) Republican, but also gave her money.

Interestingly, in New Jersey, where the Republican Chris Christie is fighting a tough battle against the very unpopular Democrat incumbent John Corzine, the defection of a moderate third party candidate may do the exact same thing the conservative revolt is doing in New York: Give the election to the liberal Democrat.

The message is clear: Republicans need to work hard on a reform platform that attracts both conservative and moderate voters.

Armey and his friends have a reason to feel comfortable sticking to their conservative line. Gallup just announced a survey that showed that conservatives make up the largest voting bloc in the country, 40 percent.

But, and I hate to break this to my conservative friends, in America, 40 percent of the country is not enough to gain a working majority in Congress. Without the help of moderate and independent voters, conservatives will stay in the minority, keeping the reins of power in the hands of liberals like Nancy Pelosi and Harry Reid.

Conservatives seem to be mystified that these liberals hold the reins of power even though they make up a small minority of the country. Most polls show that only about 20 percent of the American people consider themselves to be liberal.

But it shouldn't be any mystery. It is all about building a majority coalition, and the Democrats for the last two elections have been better at it than Republicans.

In order to build a governing coalition, the Republican Party must exhibit one over-riding philosophical trait: flexibility. What makes sense in New York and New England may not make as much sense in South Carolina and Texas. I know this is blasphemy to hard-right activists. But it shouldn't be. Building coalitions is an essential party of any democracy.

Having political flexibility doesn't mean becoming a sell-out or a squish. It does, however, mean having an understanding of our unique political system, where sometimes it is better to vote with the head and the heart rather than just the heart.

It is different in many European democracies. In Europe, the voters vote their hearts and the leaders negotiate the coalitions after the results are in. Most European democracies have some kind of proportional representation, which means it is not a winner- take- all system. Representation in the legislative branch is determined by the percentages that each party gets in the election. That leads to a plethora of political parties, making third and fourth parties vitally important in determining the governing coalition.

That means that conservatives, in order to get a majority in the House or the Senate, have to build their coalitions before the elections. Call it broadening the base, call it a big tent, call it practical politics, but without a certain amount of pragmatism, the conservative party is destined to be a large but largely powerless minority.

But because Emanuel used all of the levers of power at his disposal, he was able to get the most electable Democrats through the primaries. Often, these were pro-life or pro-gun Democrats who promised to vote with their constituents on gun and abortion votes in the House, but also promised to vote for the pro-abortion, anti-gun Nancy Pelosi to be Speaker of the House.

Because Emanuel led with his head and not only his heart, Democrats were able to take back both the House and Senate in 2006.

In 1994, Newt and Armey were able to pull together a mirror image of the Emanuel coalition, by promising a "contract with America" that was heavy on economic reforms, and light on socially conservative promises that they knew we couldn't keep. They too had a wide ideological coalition that included moderates like Chris Shays and conservatives like Tom DeLay. That coalition was diverse enough to give the GOP a majority and durable enough to keep the majority around for a decade.

We don't have a proportional system here in the good old USA. Either you vote for the winner or the loser. It is up to the conservatives and moderates to make their decision about whether they want to vote with their heads (and hopefully win back the majority) or only their hearts (and probably keep the Speaker's gavel in Nancy Pelosi's hands).