How I got taken by a work-at-home scam 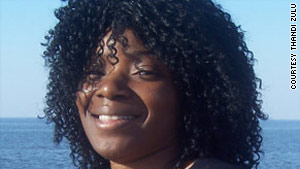 "I didn't pay attention," says Thandi Zulu. "When you're desperate ... you just go ahead."
STORY HIGHLIGHTS

(CNN) -- Thandi Zulu was single, pregnant and staying at a women's shelter in Houston, Texas, when she received a mysterious letter one day.

A company told Zulu that she could make big money working at home in a data-entry job. No résumé or experience was needed. All she had to do was pay a $200 fee.

You probably know what happened next. Zulu called the company, gave them her checking account number and then tried to stop herself because she realized that she was doing something stupid.

Convicted financial guru Bernard Madoff grabbed headlines for swindling wealthy clients out of $50 billion in a massive Ponzi scheme. But work-at-home scammers are also plundering the paltry savings of ordinary people like Zulu every day.

Work-at-home-scams are on the rise, consumer watchdog groups say.

Scammers are busier than ever because tough economic times are making people more desperate to make money, says Christine Durst, CEO of Staffcentrix, a company specializing in home-based careers that sifts through home-based job leads every day. iReport.com: Do you have a business at home? Tell us

Durst says people are searching more for home-based jobs to save money on gas, clothing and child care. Seniors are also looking to supplement their dwindling retirement income.

Durst says Staffcentrix researchers screen about 5,000 home jobs leads every week, and there is a "54-to-1 scam ratio."

"This means that for every 55 [work-at-home] leads we investigate, only one passes our legitimacy standards," she said.

... frankly, [scammers are] quite cocky. It's a craft for them. They really pride themselves on understanding the human psyche.
--Christine Durst, CEO of Staffcentrix
RELATED TOPICS

"The Internet is a boon for this industry, because it's a very cheap method for reaching consumers across the U.S. and the world," Hobbs said.

Catching work-at-home scammers is difficult because they use online facades and fake identities, and they constantly change names and mailing addresses, Hobbs says.

Those who are caught, though, can face serious time. One work-at-home scammer was sentenced to 22 months in federal prison last year and ordered to pay $293,619 in restitution, Hobbs says.

But many scammers often act as if they're too clever to get caught, Durst says.

"We have over the years engaged in e-mails with them, and frankly, they're quite cocky," Durst said. "It's a craft for them. They really pride themselves on understanding the human psyche."

Be wary of "palm trees, beaches and bikinis"

A consumer's best defense against these clever predators is to develop their own guile, Durst says. First, they should learn how to spot the warning signs of a work-at-home scammer.

Any advertisement that contains the phrase "work at home" is immediately suspect, because working at home is not a job title, Durst says. Scammers use that phrase to bait their victims.

Other warning signs: You're required to pay a fee for additional information, promises of "unbelievable pay!" and claims that no experience is necessary or résumé is needed.

Durst also says to watch out for "palm trees, mansions, beaches and bikinis."

"If the ad you're looking at features palm trees, a mansion and a Ferrari, it's probably a scam. Successful scammers often bag their prey by dangling enticing things in front of them, much like kidnappers do: 'If you get into my car, I'll give you this candy bar,' " Durst said.

There are other rules people should follow as well: Never forward any money to an "employer," never give personal information like a Social Security or bank account number over the Internet and never agree to cash checks for a percentage under any circumstances, consumer watchdog experts say.

Those who think they've been scammed can still get help. They can contact the FTC (http://www.ftc.gov/), the Better Business Bureau or the attorney general's office in their state.

Why do people still fall for them?

Despite the publicity generated by work-at-home scammers, why do so many people still fall for the scams?

Some consumer watchdog groups say it's too simplistic to say that people are gullible. For example, many of the people who say they lost money in Madoff's Ponzi scheme were celebrity actors, writers, wealthy people -- people with abundant smarts. See some of the celebrities

Hobbs, from the FTC, says work-at-home scams appeal to that can-do spirit in Americans.

"Americans have an entrepreneurial sprit," she said. "Many people will want to work independently, and they're looking for those opportunities, especially in hard times."

Durst, the CEO of Staffcentrix, cites another reason.

"It's desperation," she said. "It's the same reason people play the lottery: They think today could be their lucky day."

"I didn't pay attention," she said. "When you're desperate and you're looking for something, you just go ahead. I was pregnant, and I didn't have a job. I wanted to work at home."

Zulu says she finally found a legitimate job. She moved to Laurel, Mississippi, and now sells medical and dental plans through a company called Ameriplan USA.

She even calls people and tells them that they can sell Ameriplan from their own homes.

But sometimes she runs into an unexpected problem.

"They don't believe me," she said. "People think we're scammers."