What makes a good boss? 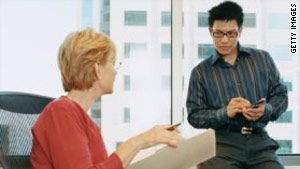 A good boss realizes that not every task can be your No.1 priority, says expert.
STORY HIGHLIGHTS
RELATED TOPICS

(CareerBuilder.com) -- Bosses get a pretty bad rap. Where two or more employed people gather, you're sure to hear a story that involves the word "boss" and one of the following descriptors: "stupid," "dumb," "incompetent" or "clueless." Turn on the TV or go to the movies and bosses don't fare much better. They're either bumbling fools or conniving villains.

Bad bosses exist. We all know that. You can easily list all the qualities a bad boss possesses without having to think too much. But what makes a good boss? I'm not talking about the fanciful daydreams we have about a boss who wants to pay us seven figures for working one hour a day.

To find out, we asked employees about the best bosses they've had and what characteristics they hope to see in the people for whom they work.

When freelance videographer Joe Vass describes the best boss he ever worked for, all of the qualities boil down to showing respect, a characteristic that many workers value regardless of what industry they're in.

"The best boss I ever had made me feel like a valued and important member of the team -- not through his words, but through his actions," Vass said. "He encouraged hard work, ingenuity and creativeness and valued everyone for who they were, and so we were inspired to work hard for ourselves and for him. He was always available for consultation and skilled at good, constructive criticism [and] suggestions."

As a result of this approachable and encouraging leadership, the team always recognized the boss as the leader and decision-maker. It was something the team thought he earned from them and didn't demand.

Debra Yergen, a director of marketing for a cardiac hospital, said she recognizes the value of giving to her employees and receiving something in return.

"As a member of the hospital's key management team, there are a lot of responsibilities I have that cannot be delegated," Yergen said. "But whatever I do assign to my staff, I make sure they see me do, too. I also make sure that when my staff works a really long shift one day -- and sometimes into the night -- they get rewarded with coming in late another day."

Were she to hand out orders that she herself couldn't do and provide no reward for the times when late hours cut into personal time, she might not have such a positive relationship with her employees.

Wayne Botha of Botha Consulting has learned the valuable of flexibility during his career working with IT project managers.

"The days of IT professionals working nine to five are gone. Project managers work flexible schedules in different time zones from around the world," Botha explains. "Good bosses focus on getting the job done, not on measuring the hours that a subordinate sits in the chair at the office."

The notion of a standard workday is fading for all professions, and life sure hasn't become more rigid. Personal obligations and family responsibilities make strict 9-to-5 work hours just as impossible. Flexibility matters to employees now more than ever.

"A good boss is flexible about how things can be done. In being so, he or she opens the possibility of learning ways to do things better. [Of] equal importance is learning what not to do," Wheaton said.

"Flexibility in hiring is important, too. Qualifications and assets in a job posting should be guidelines. A boss should recognize that sometimes relevant work experience is more important than education background."

And so much more

What makes a good boss can't be distilled into one or two adjectives. As employees are eager to explain, good bosses encompass a broad range of qualities that make going to work enjoyable. According to workers, here are other ways bosses can be allies and not enemies:

• "Be consistent and predictable. It is hard for subordinates to make the boss look good when the boss behaves erratically and every situation seems to result in a unique decision." -- Botha

• "They are able to get you to do something without using coercive tactics or bullying. They're able to frame the discussion in the same way a good basketball coach tells you what the best play will be." -- Andrew Lee, co-founder and CEO of JamLegend.com

• "Promote from within. Develop your subordinates and then promote them when the opportunity arises. Subordinates will quickly understand your intentions when you always hire people from outside your organization for top positions." -- Botha

• "A good boss will defend your actions (when they are defensible) and will help you when there is a problem." -- Deborah Graham

• "A good boss understands that every task given to you cannot be your No. 1, top priority and will work with you to readjust priority lists if necessary." -- Graham

• "A good boss knows the overall value each employee brings to the organization, and keeps that in mind. So, a single transgression by an otherwise excellent employee doesn't demand the same response as the same transgression by an employee who consistently makes mistakes." -- Bruce Campbell, vice president of marketing at Clare Computer Solutions

• "A good boss keeps you informed about what is happening at the higher management levels and what projects might be coming down the road." -- Graham