10 reasons why dating an older man is awesome

By Simcha Whitehill, The Frisky 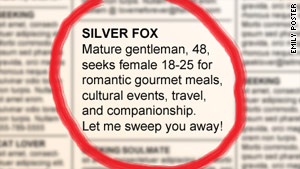 "I wasn't some gold digger ... or even a woman with daddy issues," says columnist.
STORY HIGHLIGHTS
RELATED TOPICS

(The Frisky) -- My new tall, dark and handsome boyfriend was standing across the room looking so fine in his shirt; I couldn't take my eyes off him.

It was my pal's birthday party and the first time I had ever dragged my latest man-friend out with my buddies.

I wasn't sure how it would go, yet there he was, charming the pants off them all by himself, busting out his A-material small talk with some friends in a corner. He was doing his best to impress. It was very sweet. He was going all out for me.

Meanwhile, I was at the snack table and before I could curse myself for leaving him to go in for another cheesy cracker, I was accosted by a buddy's wife I barely knew, a nasty woman named Sue. "How old is he?" she pried.

After politely playing 20 questions with Sue about my new boyfriend, I knew this was the one she was getting at. I wanted to say something like, "He's not as old as those frown lines make you look!" Anything that would shut her up and let me enjoy my prized romance.

Yes, my new man was older than me, much older than me. But I wasn't some gold digger trying to claw at his cash account, or even a woman with daddy issues. I just thought he was the hottest, funniest man I'd ever met.

He was more exciting to be with than any of the 20-something guys I knew. I was smitten with his wit and the way he filled out a pair of pants. Really, are there better reasons to date someone?

Should I seriously have let 15 years come between me and happiness, just so I could avoid judgment from girls like Sue? I really should have answered her question with the long list of truly great things about dating an older man.

The Frisky: 9 inexcusable excuses for breaking up

He knows cool stuff you never heard of: Generation gaps can be a good thing culture-wise. He can introduce you to music and movies that are totally awesome classics.

The Frisky: 5 ways women try to impress men (and why they don't work)

He's super supportive: He's got a career and is secure in his work life, so he's totally supportive of your ambitions. And probs full of good advice! Not to mention the quarter-life crisis is kinda like the mid-life one.

The Frisky: Maybe its time to rethink your dating strategy?

Someone has already "fixed him up": That relationship didn't work out. And now you can reap the benefits of nice shoes and hand towels in the bathroom.

The Frisky: Factors in making love last (or not)

He doesn't stay out late: He might be a ladies' man, but after a certain age, he's not out on the prowl every night in da club lookin' for a fresh piece. He just wants to hang with you.

He knows himself: Nobody's perfect, and by now, he understands his main foibles. So, he can even communicate them to you to prevent friction.

The Frisky: The 10 best short hair moments of the decade

You're the pretty one: It's shallow, but it's always nice to feel extra sexy.

He doesn't want to be alone: He's already hit that point when men realize they don't want to be all by themselves. Even if they intend to stay confirmed bachelors, they still want company.

Salt n' pepper hair: So hot. Sure, not every middle-aged guy has got it, but it certainly ups your chances.

No more going Dutch: There won't be that awkward pause when the check comes; he'll always take it because a man of his years makes more money. You won't even feel the slightest bit guilty.

He is going to be this rad forever: Some peeps just lose their lust for life at a certain age, but your dude has still got it! He can not only keep up with your young butt, but he piques your interest. You know for sure that time doesn't slow him down. He's always willing to try new things. He's not going to turn into some couch potato all of a sudden. In another 20 years, he'll still be l-i-v-i-n'.