I got married for health insurance

By Nona Willis Aronowitz, The Frisky 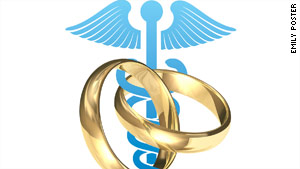 Do you vow to love, honor and provide health insurance?
STORY HIGHLIGHTS

(The Frisky) -- I'd never been one of those girls who'd dreamt about her perfect wedding. The white wedding dress, the exorbitant costs, the fuss over a big, shiny rock -- none of it ever appealed to me.

I wanted to find a lifelong partner, and a family sounded nice, too, but honestly? I never cared much about that piece of paper.

So why did I just marry my boyfriend after pondering it for a mere two hours? One reason: health insurance.

My now-husband is a bartender and a student whose school's insurance is exorbitant. The man hadn't gone to the doctor in years, living in fear of a major accident or illness.

We had lived together for about eight months when I got a job as a reporter for a newspaper with a kick-ass medical plan. According to my job, a domestic partnership affidavit was standing in the way of my partner having awesome coverage and escaping $8000 worth of retroactive hospital bills. It was a no-brainer. Onto domestic partnership!

Problem is, the state of Illinois doesn't let you get domestic partnership if you're hetero. ("If they could, no one would get married!" the City Hall employee informed me smugly, as if 1) that fact was actually true and 2) rampant domestic partnerships would mean the end of the world.)

The choice was clear. We went ahead and got married. The weird thing wasn't the actual City Hall wedding (it was actually sort of fun!), it was watching people react to the news. Some were angry -- "How could you have gotten married without me there?" my best friend implored, crushed. Others were confused --"Really, Nona? I thought you weren't into that sorta stuff."

The Frisky:Got engaged but not really in love with man

But the most common reaction was voyeuristic elation -- from everyone, even my long-lost elementary school friends on Facebook. It was like I had become part of some coveted club, or even a higher-class citizen.

I understood more than ever why gay marriage was such a big deal. I also started to get why people become so wrapped up in weddings. It's your moment. All eyes are on you. Suddenly, everybody loves you!

The Frisky: Boyfriend better give me good gifts

Mine is a situation that's left me contemplating my principles. By getting insurance-married on the fly, did I "give in" or did I beat tradition? Maybe a little bit of both?

I have nothing against weddings -- nothing's better than a celebration of love -- and if my husband and I decide to get married "for real," I'm sure we'll have an epic one. But the government certificate thing has always made me indignant, especially nowadays when the health insurance crisis looms large. Why should one be able to have health insurance more easily because they happen to be heterosexual? Or, for that matter, if they believe in the institution of marriage enough to support it?

The Frisky: Paris magical at Christmas

Either way, our shotgun wedding was just as much of a gesture of love as anything else. People get married for a lot worse reasons than ensuring their loved one's health, safety, and peace of mind. And at the very least, now I know my vow of "in sickness and in health" is backed up by a PPO insurance plan.