How to handle a bad gift from a boyfriend

By Judy McGuire, The Frisky 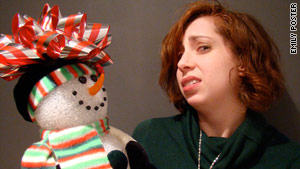 A really bad gift can be a sign that your relationship is headed over a cliff, columnist says.
STORY HIGHLIGHTS
RELATED TOPICS

(The Frisky) -- Have you seen that Target commercial where the guy gives his date a beautiful necklace, only to have the woman look kind of uncomfortable and announce that she didn't think they were quite "there" yet?

After a flash of hurt crosses his face, he zings back that he bought it at Target so it was super cheap. I always high-five that guy in my head, but truth is, I've been an ungrateful giftee in the past.

However, it's also the truth that I've received a lot of crappy gifts. Some were heartfelt, others were just dumb. So in light of the fact that we're in primo gift-exchange season, I put together some guidelines for how to handle the gifts you get that you really wish you hadn't...

I thought only married ladies woke up to things like vacuum cleaners or shower squeegees under their tree. Not so.

A yoga instructor I know received a Dustbuster from her live-in boyfriend, while singer/songwriter Peg had a beau who gifted her with an oven mitt. "I should've yelled," she recalls. "I think I just had a stunned, very disappointed look on my face. Not sure what he was trying to say, but clearly we were nearing an end."

How to handle: Generally, I'm of the mind that you should try to smile and eke out a thank you, no matter what. But when someone -- particularly a live-in partner -- gives you something designed to make cooking for or cleaning up after them a little easier . . . well, no. Just no.

The Frisky: When a bad gift reveals an even worse relationship

You have to have a little sympathy for the dude brave (or foolhardy) enough to buy you clothes. Even if he has your style down, most men are clueless with women's sizes. Searching your closet isn't much help either as one designer's "M" is another's "XL," so he's screwed either way.

How to handle: Don't take it personally. Politely tell him that while you love the dress/sweater/chaps, it's not your size and you're going to exchange it for something that'll allow you to exhale.

The Frisky: My boyfriend doesn't like my hairy legs!

"Our first Christmas together, my ex bought me all action figures, from sports and horror movies," shares my friend, Jennifer. "One was a bobblehead!" Jennifer's now-ex had never been in a serious relationship before, so he wasn't being cruel with the bobblehead, just clueless.

How to handle: Jennifer knew better the next year. "Develop specific lists of things you want on Etsy, Amazon, wherever," she advises. "And let him choose from a list of things you already know you like. Because sorry -- if you want to be surprised, you most surely will be." And not in a good way.

The Frisky: The 5 lies women tell themselves

I still remember the unspeakably ugly, donut-shaped, skull-adorned, pleather purse my man bought me one year. It was so off. So utterly not me. But perfect for his ex -- a much younger goth chick. With a forced smile I told him it seemed that he was shopping for the ghost of relationships past.

How to handle: Calmly explain that while she was Kmart, you are Bloomingdale's and he has to shop accordingly. Men tend to think women all want the same things, so if he spent years getting used to gifting a one way, there might be a period of adjustment while he resets.

You can learn a lot about a relationship from the gifts you exchange.

"The last Christmas we were together I gave him a suitcase, and he gave me a set of knives," says an editor I interviewed. The two split up by mid-January.

My message gift was a cheapo, faux turquoise, Santa Fe-style, silver-plated bracelet that an ex picked out with help from the girl he was cheating on me with. Ouchie.

How to handle: You got the gift, don't wait for the engraved announcement -- get out.

The Frisky: 9 inexcusable excuses for breaking up