Your family dog may be smarter than your toddler

(CNN) -- Your dog may not actually be smarter than somebody's honor student -- popular bumper stickers aside. But your canine companion might well be smarter than their toddler, according to a growing body of research on how dogs think. 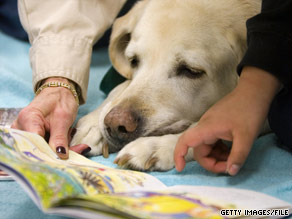 The smartest dog breeds are on par mentally with a 2 1/2-year-old, professor says.

Using adapted tests designed for human children, psychologists have learned that average dogs can count, reason and recognize words and gestures on par with a human 2 -year-old.

"They may not be Einsteins, but are sure closer to humans than we thought," said Stanley Coren, a professor emeritus at the University of British Columbia and leading researcher on dog behavior.

He said the average dog can understand about 165 words, including signs, signals and gestures. They can also count to about 5, he said.

"I mean, we're not going to make them an accountant or something," Coren said in an interview with CNN Radio.

The smartest dogs, he calls them the "super breeds," are on par with a 2½-year-old, recognizing up to 250 words.

And, no, not all breeds are created equally.

For his book "The Intelligence of Dogs," Coren asked more than 200 dog-obedience judges to rank 110 breeds based on their intelligence. Border collies, poodles, retrievers, German shepherds and Doberman pinschers were among the dogs at the head of the class.

The intellectual runts of the litter? The borzoi, chow chow, bulldog, basenji and -- finishing dead last -- the Afghan hound.

The dividing line, Coren said, tends to be the age of the breed. More recent breeds, like the collies and retrievers, have been bred for years to do what humans want them to do.

"We've been wiring into dogs the ability to communicate with us," said Coren, author of several books on dogs' thinking, most recently "The Modern Dog." "If you will, we've been manipulating their intelligence."

Meanwhile, breeds like hounds naturally did what humans wanted -- i.e. chase tasty animals -- and didn't need to be fine-tuned, he said.

"They did the work all by themselves," Coren said. "They didn't have to cooperate with the human being, and all the human had to do was get there before the dogs ate it all."

Included in the number of "words" dogs are believed to know are hand gestures, like pointing, and nonverbal sounds, like the whistles used to direct sheep dogs and retrievers.

Source: "The Intelligence of Dogs"

Counting ability is tested in drills such as one in which treats are dropped, one at a time, behind a screen. When the researcher either sneaks away one of the treats or stealthily adds an extra before raising the screen, the dog will wait longer -- appearing to puzzle over the bad math -- before eating the treats.

"Too often, many people look at dogs as four-legged people," said Fine, who specializes in the use of dogs in treating patients with developmental disorders and other mental-health conditions. "We need to recognize what dogs cue in to. Once you understand better how to interact, it causes a better coexistence with your pet companion."

Coren said the findings on dog intelligence showed they have more sense than some scientists may have thought, but that some in the general public may be surprised for different reasons that span a wide range of thought.

"There are some people who think that dogs are just little human beings running around in fur coats and there are other people who sort of think that they're unfeeling biological mechanisms," he said. "The truth of the matter is really that dogs are neither extreme."