(OPRAH.com) -- Attention single ladies! Comedian Steve Harvey, the best-selling author of "Act Like a Lady, Think Like Man" and a self-professed expert on manhood, is here to take you inside the male mind. 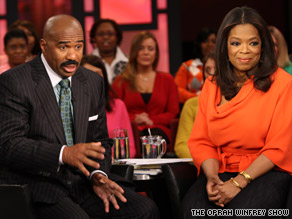 Comedian Steve Harvey says real men like to provide and protect, but some also like to cheat.

Whether you're looking for Mr. Right or trying to forget Mr. Wrong, Steve isn't holding anything back.

Many women have long lists that describe what they're looking for in a man...but are their standards simply too high? Yinka and Lynell are two 30-something friends who have long lists. They're here to ask Steve if they'll ever find a man who meets all their requirements.

"That would be the Lord," Steve jokes. "I'll be trying to meet him the same time you do."

If a woman is serious about her list, Steve says she should ask herself one question before turning down a date. "Are you willing to be the same thing to him that you're talking about on that list?" he says. "A lot of women are not."

In general, do women even need a list? Steve says single ladies do need to set standards. "I think lists are great. You've got to have them. You've got to know what you're looking for," he says. "Without standards, you settle for stuff."

Before you get discouraged, Steve reminds women to stay patient and remember that real men aren't afraid of standards and requirements.

"You've got to wait on this guy to come along. He's coming. He's out there. He's already created. God has already made him," he says.

"He has a job. He's wearing the clothes you like. He's walking around. You're not waiting on him to be born. He exists today. All you've got to do is stay patient."

Why do many successful, independent women have a hard time finding love? There are millions of smart, beautiful women around the world who can't figure out why they're unlucky in love, including a group of friends from New York. Steve is here to set them straight.

Steve says many successful women dated good men but didn't know it at the time. "You don't know the DNA of a good man," he says. Even if you look like a million bucks -- and you have a few million in the bank -- Steve says a woman needs to know how a man shows his love. It's all about the "three P's." Oprah.com: Can a list help you find love?

"We profess, we provide and we protect," he says. "A man has got to see where he fits into the providing and protecting role. If you've got everything, you can do everything, you've got your own car ... you've got a guard dog and a handgun. The guy is thinking, 'Where do I fit in here?'

"You've got to make a space for him to fit in so he can come in and do what men do."

Steve doesn't advise women to downplay their success or pack up their designer shoes. Instead, he says strong women have to walk a thin line.

"You can't let your independence and your ability to take care of yourself be the dominant factor of who you are," he says. "You know how many times I hear women say: 'I don't need a man. I've got this. Why don't a man just come to me?' Just like you're saying it, you're projecting it. If you're projecting it, where does a man fit in there? Just relax." Oprah.com: How to act like a lady, think like a man

After a few dates, some guys just stop returning calls and texts. Even if they aren't interested, don't they want closure?

Steve has a simple answer to this question...no. "Ladies, you're not going to get closure from a man," he says. "We don't do closure. And you know why? Because we don't even know you're having an issue. We're stupid."

If you're hoping for a courtesy call, Steve says you can forget about that too.

"We're not courteous. Listen, it's not in our DNA as great communicators anyway," he says. "See women keep waiting on closure. Bring it on. If you want closure, close. Move on with your life."

How important is sex in a relationship? Sex, or "the cookie" as Steve calls it in his book, is a major point of contention for many couples. If you don't think it's important to your man, Steve says you're wrong.

If a man is cheating or has the intention to cheat, why pursue commitment with one woman?

Michele found out her boyfriend of many years was cheating after he told her he was ready to settle down and get married. The male mind may be a mystery to women, but Steve says there's a simple explanation for this behavior.

"A man having sex outside of his relationship is very different from [a woman]," he says. "Once we shower and wash off, we cool.

"Please know that about a man. If he's going to cheat, it has nothing to do with his emotional attachment to you or his feelings for you."

Steve says cheaters make promises to their significant others because they know that's what women want to hear.

"Michele, there's nothing wrong with you. You haven't done anything," he says. "Please release yourself. Let the baggage go."

Sadly, many women have dated men who cheat...and most of them don't even know it.

Steve says there are a few major reasons why men stray, though none of them excuse the behavior. The top 5 reasons:

• They think they can get away with it

• The man hasn't become who he wants and needs to be or found who he truly wants to be with.

• What's happening at home isn't "happening" like it used to.

• There's always a woman out there willing to cheat with him.

If you're married to a mama's boy, is there anything a wife can do to become the number one woman in his life?

Before Jill married her husband of 13 years, she says she knew he was a mama's boy. Over the years, she's grown tired of coming in second.

Steve says the first mistake women like Jill make is thinking they can change their men. "You think if you give him enough cookie, bake it just right, he'll straighten up," he says. "That's not what happens with a mama's boy."

Men stay in this adolescent mind-set because their mothers set standards when they were boys and upheld those standards throughout their lives, Steve says. Wives must enter into their marriages with their own set of rules to stand a chance. Oprah.com: Get more of Steve's love advice!

If that doesn't work, Steve suggests appealing to the "three Ps" -- profess, provide and protect. "If you don't say to your man: 'Okay, look, next time she calls, do not leave us in the middle of the night. We're unprotected,'" he says.

"Every man has it in his DNA to do these things when we love you. When you call on it and require it, we rise to the occasion."