By Diane Mapes
Special to CNN 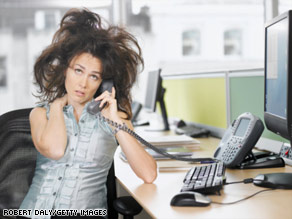 Bad or no customer service can drive consumers crazy.

But the public relations account director from Chevy Chase, Maryland, says her most memorable moment was when a customer service rep informed her that her house wasn't there.

"My husband and I were trying to get service from a cable TV provider and were told by a representative that our address didn't exist," she says.

"They said they couldn't help us or sign us up for service, even though our neighbors across the street had cable. It probably took eight hours to get it all straightened out."

The downfall of service

Thanks to outsourcing, labyrinthine answering systems and unresponsive corporations, many have come to dread what's paradoxically known as "customer care."

"People get lost in that maze of 'press 1 for this and press 2 for that,'" says Randi Busse, president of Workforce Development Group Inc., a customer service training center in Long Island, New York.

"Years ago, the customer was the most important thing, but today, businesses large and small are indifferent."

Real service is such a rarity that some frustrated folks are turning into what BusinessWeek calls "consumer vigilantes." The vigilantes blog about battles with customer service departments; they use the Web to track down high-ranking employees' e-mails and direct lines.

"I tweeted him and asked if he could help and he tweeted right back and said, 'Here's my e-mail, shoot me your account number,'" says Shah.

"By the end of the day, five trucks, three supervisors and two technicians were at my house and we had the best cable reception we've ever had. All it took was finding a person high enough on the food chain to fix the problem."

Michelle Gotay, a motivational speaker from Watertown, Connecticut, went up the corporate ladder in a creative way after unsuccessful calls to an automaker about her problematic car. Gotay dressed up as a "nutty character" and vented her frustrations in a YouTube video she forwarded to the executive offices of Nissan North America.

"My friends thought I was nuts and that no one would ever see it or respond. But 16 hours after I e-mailed them the link, I heard back from the company. They loved the video and helped me resolve my car issues."

The new word of mouth

"With blogs and social networks and the way information can be posted so freely, word of mouth is incredibly powerful," says Muller. "It's more and more difficult for companies to survive without learning to embrace this new era. They don't have a choice but to start to provide better customer service, especially in hard economic times."

Muller says nearly 300,000 registered users interact on GetSatisfaction.com with nearly 18,500 companies -- from big guns like AT&T, Ford and Verizon to startups like Foxmarks and Widgetbox. Customers post questions or complaints which company reps (or other customers) try to resolve.

"We've had situations where a customer will come in furious and the company will step in and do a stellar response and then the customer will go away happy," says Muller. "And it all happens in a public way. We believe in the good, the bad and the ugly all being out there."

The ugly stuff is not always on the company's part, says Vernon Effenberger, 31, a PR account executive from Austin, Texas.

"I worked for an energy company for 2 ½ years and I once got a call from a woman who didn't have power at her restaurant," he says. "The problem was on her end -- she hadn't had all the inspections she needed -- but she was livid. She said, 'If I ever see you, I will kill you.' I'd had people yell at me before, but I'd never had a death threat."

Robin Taylor, 42, a Nashville, Tennessee, customer care rep, says customers scream, cuss and even cry. But the calls that really get on her nerves are the ones from "the freaks."

"There's one guy who calls and just says 'You f--ing b---ch' in this weird low tone and then hangs up. He's called a couple of times," she says. "And then there's another guy who calls in regularly and says he wants to discuss his bill, but then says 'I want you to tell me to write with a pink pen. And I want you to say, 'Do it now!'"

Most people who contact customer service sincerely need help, and companies would do well to listen to them, says Busse, who's worked in the industry for 15 years.

"Customer service is going to be the new differentiator," she says. "Price isn't the deciding factor anymore -- it's service."

That's certainly what worked for Rachel Hunt, who says her most recent customer service experience, in which an L.L. Bean rep took 10 minutes to help her track a pair of hard-to-find clogs for her husband, was "positively amazing."

"I'd normally think someone would just want to take the order and get off the phone, but he was really cooperative and patient and very friendly," she says. "I felt like I should send the company a thank-you note. It definitely left me with a positive feeling."

LifeWire provides original and syndicated content to Web publishers. Diane Mapes is the author of "How to Date in a Post-Dating World" and writes the column, Single Shot, for the Seattle Post-Intelligencer.