(OPRAH.com) -- Bullying takes place in every school and playground in our country. But what some parents see as a typical challenge of growing up is becoming more serious than ever before. 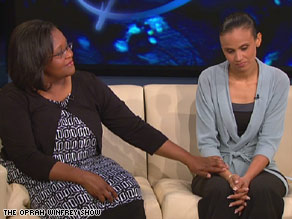 Sirdeaner Walker reaches out to Masika Herrera -- both mothers of boys who killed themselves after being bullied.

On April 6, 2009, 11-year-old Carl Walker-Hoover's family says he hanged himself after enduring bullying. Just 10 days later, 11-year-old Jaheem Herrera, another victim of bullying, took his own life, according to his family.

Carl Walker-Hoover's mother, Sirdeaner, describes her son as a bright student and a happy kid. "He loved the Lord. He was Christian. He was saved," she says. "He was a happy-go-lucky boy."

Sirdeaner says Carl started having problems in junior high. "They were calling him gay," she says. "I told him to talk to the teachers, talk to the administrators at school, and let them know what was going on."

Carl's family says he was verbally teased every day. "He was so afraid that he ate lunch with a guidance counselor," she says.

Sirdeaner says she took action as soon as she realized what was happening. "I joined the PTO. I sat in on a class. I even set up an appointment with Carl to meet with the guidance counselor once a week," she says. "I don't know what else I could have done." Oprah.com: Get the warning signs of depression

On April 6, 2009, Carl came home after an upsetting incident at school. "This is what Carl told me. He said that his backpack had hit the TV stand and that the TV stand hit a girl," Sirdeaner says. "The girl got really upset and threatened to beat him."

Sirdeaner says Carl was afraid he'd receive a suspension. "I tried to reassure Carl," she says. "He just went quietly up to his room, and I continued making dinner."

While making dinner, Sirdeaner decided she would bring Carl to the PTO meeting that night to talk to the principal about what happened. When she went upstairs to get Carl, she says she found him hanging from the stairwell banister. "My niece called 911, and then my daughter brought up a knife and I cut the extension cord myself," she says. "It was the worst day of my life."

Sirdeaner says she doesn't believe Carl's suicide was premeditated. "I don't really think that he planned it," she says. "But I know on that day part of everything that happened, the girl did end up telling him that, 'You act like you're feminine.'"

Carl left a note, but Sirdeaner says it did not say why he chose to take his life. In the note, Sirdeaner says Carl left his favorite toy to his sister. "He told everybody that, you know, he loved them very much. He said he was very sorry," she says. "He was looking out for his younger brother, Charles, and he didn't want him to have a difficult time." Oprah.com: Read a statement from Carl's school

University of Illinois professor Dr. Dorothy Espelage says there's a term for what Carl and Jaheem experienced -- sexual bullying. Dr. Espelage says half of all bullying in elementary and middle schools involves the use of gay slurs.

"Sexual harassment is calling others these names of 'gay' and 'fag,' and when you do that, directed to boys, it's the most hurtful thing you can do to attack their masculinity," she says. "When you call a girl a 'whore,' a 'lesbian,' it serves the same purpose."

Dr. Espelage says it's important to realize that this bullying isn't usually perpetrated by one bully. "It's groups of kids that do it. Some kids that are popular, this is how they establish dominance; this is how they look cool," she says. "Then you've got good kids around them ... contributing to it, egging it on, not supporting the victim, and ultimately it becomes a climate problem. It's the school's problem." Oprah.com: How to deal with bullies

Sexual bullying is devastating for a child, but it's even more dangerous when cyberbullying is brought into the picture. This type of bullying contributed to Ryan Halligan's suicide in 2003, according to his family.

Watch kids made "how to kill" cartoon »

"He was definitely the apple of my eye," says his mom, Kelly. "He had the greatest gift of all, and it was a great personality."

Ryan's parents say kids started teasing him in fifth grade. "When Ryan came to me and said he was being picked on, my initial response was: 'It's just words. You need to just ignore him,'" says his dad, John.

The bullying continued on and off until seventh grade. To his parents' surprise, Ryan said he was becoming friends with one of his bullies, but things quickly took a bad turn.

"He spread a rumor around the school and online that my son was gay," John says. "It was like a feeding frenzy. All of a sudden, kids who normally didn't bully Ryan got in on the so-called fun."

Ryan started getting vulgar, homophobic e-mails but didn't tell his parents. He also began long online chats with a girl he liked -- which turned out to be a devastating setup. "

In front of her friends, she told Ryan: "Look, you're just a loser. I don't want anything to do with you. I was just joking,'" says John, who says he learned about the incident later. "She and a friend started to laugh."

A humiliated Ryan said girls like them made him want to kill himself. A month later, Ryan hanged himself in the bathroom of his home. "I remember screaming: 'Why? Why?'" Kelly says. "I didn't understand it. He just seemed so happy."

"If I had the opportunity to talk to Ryan right now, I would say: 'Ryan, I love you. I want to make sure you understand that I love you. We're going to be together again someday,'" John says.

Today, John shares Ryan's story with students and teachers to bring awareness to the problem. "Cyberbullying is far more dangerous than what we had to deal with a generation ago," he says. "The level of pain that can be brought about by this behavior is unbelievable."

John says he had no idea his son was being harassed online until after his death, when he signed on to his son's instant messaging account. It was there he says he learned of the taunts -- and found evidence of his son's deep depression. "It was very clear he had been contemplating and actually planning this final act," he says.

At the time, John says he and his wife weren't trained to see the signs of depression or suicide in their son. "That last summer he became very withdrawn," he says. "I just thought he was becoming an older teenager who didn't want to hang out with Dad anymore."

John says he received some closure after confronting the bullies who taunted his son. John says he told the girl who embarrassed Ryan that he didn't believe she would have done what she did if she knew Ryan would kill himself. "When we met, she held me so tight, and I felt the sorrow and I felt the remorse," he says.

John also spoke with the boy who bullied Ryan. "It took a few more steps, but in the end, he also broke down and cried and gave me a very sincere, heartfelt apology," John says. "He finally got in touch with the level of pain that he had brought to Ryan as well."

John says it's important to realize they are just kids. "Tragically, I don't think they were in touch with the pain they were causing," he says. "Because I know they would not have done what they did if they knew the outcome would be this."

Through it all, John says he doesn't blame any person or event for Ryan's death. "In the end, I believe my son died of an illness called depression, and I believe the depression came about because of the toxic middle school environment that he was in at the time," he says. "Tragically, it went undetected and untreated, but I think there are so many kids like him out there that are at risk." Oprah.com: An important intervention you need to see

From The Oprah Winfrey Show 2009