Why some single women just need to shut up

(The Frisky) -- In a recent column on the Huffington Post, "Why I'm Single," writer Lea Lane lists all the reasons that she's still single. Why? So she can send the URL to all the nosy, possibly well-meaning busy-bodies who keep asking her why she isn't in a relationship. 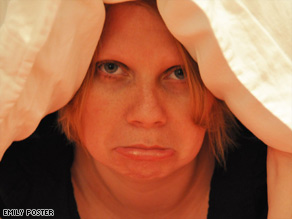 "Crappies" are women who whine to others on why they can't find a partner.

Lane presents a persuasive case; it almost made me wish for the days I, too, had the whole bed to myself. She's one of what I'll call the "Happies," women who are perfectly content with their single status.

They don't want for a companion; they love their solitude and have enough friends, hobbies, and passions to keep themselves busy.

Although, most Happies, like Lane, are "open to options, and do understand the beauty and wonder -- and blessing -- of a good relationship," they neither actively seek one nor passively hope and pray one comes their way. The Happies say they don't need a relationship to be content, and, by God, they mean it.

On the other side of the single lady spectrum, you've got the "Crappies." They're the single ladies with really crappy attitudes. Take, for example, Jezebel's Megan Carpentier, who responded to Lane's column with a list of her own, a list that not only doesn't make me a little nostalgic for my single days, it makes me sort of, well, sad -- for her.

I'm sad for the Crappies, because, as much as they say, like Megan, "I've made my peace with being single because I don't have to pretend I don't drink from the carton or sleep with one of those face masks on or watch 'Murder She Wrote' too late at night," they're whining to everyone who will listen about how much it sucks that they can't find a guy who wants to date them.

They're so committed to not compromising, to not being flexible, to not stepping a centimeter outside their comfort zone, or, God forbid, turning off their guilty pleasure TV, they refuse to actually GO OUT, mingle, maybe even meet someone nice.

No, they'd rather stay in, whine, and have their friends write testimonials on their blogs about why they'd be so great to date.

In an attempt to hide their loneliness from themselves -- because they're sure not hiding it from anyone else -- the Crappies adopt an air of self-righteousness. "I'm probably alone because I dated when I wanted to," they tell themselves, "and got into relationships when I wanted to, and got out of them when I needed to."

As if people who aren't alone are a bunch of morons who got stuck in bad relationships that they never wanted to be in and don't have the strength to get out of. "I'm alone because I eschewed goal-oriented dating and 'trying to find someone,'" they brag.

Ladies, if you're single and truly happy to be so, more power to you! There's no reason in the world you need to make a list or explain to anyone why you're not in a relationship.

But if you're a woman who is unhappily single and would love nothing more than having someone to share your life with, it's time to quit whining, stop making self-righteous excuses, turn off your TV, get out there, and meet people.

Take care of yourself, dress well, look good every time you go outside. Smile at people when you're out and about, make small talk in check-out lines, keep your radar up at all times. You never know when the right person for you will be rounding the next corner.

But bear in mind, YOU aren't perfect, and there's not going to be a perfect person for you. If you refuse to settle for anything less, you're going to be lonely for a very, very long time.

If you aren't prepared to open your mind a little, you might as well stay in with your "Murder She Wrote" and your crappy attitude. But, for the love of God, quit your whining. The rest of us don't want to hear it anymore.