(CNN) -- If you're looking for love and not having much luck, maybe you could increase your success by getting a bit more passionate -- about helping others. 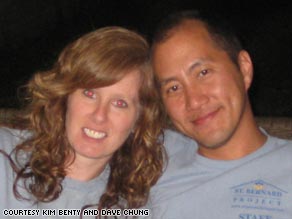 When singles write to advice columnists complaining about being lonely, they are often urged to volunteer.

Duane Bates, the public relations director for Habitat for Humanity, says it's not unusual for their volunteers to meet on a building site and "end up together."

Victor Fasolino was living in New Jersey and his future wife, Lora, was living in Seattle, Washington, when the two met in Hungary in 1996 while volunteering on a Jimmy Carter Work Project for Habitat.

"I thought she was an attractive young lady," recalls Victor Fasolino, adding that they were working 10-12 hour days so it wasn't until the project was almost complete that they got to spend much time together.

Both were committed volunteers and had signed up for a Habitat fundraising bike ride of 500 miles two weeks after they returned to the United States. They got to know each other while pedaling from Kentucky to Atlanta, Georgia.

The two got married one year later atop a house they helped build during another project in Pikesville, Kentucky. Other volunteers had cleaned and scraped a ladder so the bride wouldn't get her wedding gown dirty climbing to the roof. The groom wore a tuxedo, a local minister officiated and a fiddler joined them on the roof to provide the music.

In 2007, Dave Chung and Kim Benty found each other while helping Hurricane Katrina victims in New Orleans, Louisiana.

Chung had been a pro golfer playing mini-tours in California and living half the year in Toronto, Ontario, when he got the urge to drive down to New Orleans to volunteer.

"I really liked the place, and the people," says Chung. "The original plan was to come down here for two months and go to a friend's wedding, but I ended up staying."

At first the 30-something golfer worked for Habitat for Humanity, learning plumbing and wiring. Then he went to work with Liz McCartney, 2008 CNN Hero of the Year, at the St. Bernard Project.

Meanwhile, Kim Benty, 36, an interpreter for the deaf in the western New York town of Batavia, began a series of trips in July 2007 to work with volunteers in the same area.

Benty was smitten after meeting Chung on her first trip, but he merely smiled and went back to work.

"He was doing a little of everything, a runner, bringing supplies, our construction manager," Benty remembers. "I thought, you know, I am just another volunteer to him."

There were several more trips, a few chance meetings -- but no sparks. But something changed when they met yet again in December 2008 at a friend's Christmas party. "We just hit it off that night," Chung says.

Chung says he was attracted to her for a million little reasons: "She's attractive, fun to be around and both of us are kind of easygoing."

But then it was time for Benty to go back to New York and for Chung to make the long drive to Canada to see his relatives.

Chung's New Year's Eve plans fell though, so he asked Benty about coming down. They hung out for a few days and Chung was set to drive by himself back to New Orleans.

"She hopped in the car with me, and came down. It really surprised the people who knew her," Chung says, "because she is the kind of person who likes to plan everything."

"Ha, it did surprise people," Benty admits. "I am very conservative, a planner, it was out of context for me."

They both admit they are at a crossroads of sorts.

Psychologist Diana Kirschner, author of the book, "Love in 90 Days," says the couple's relationship could go either way.

"I've seen couples come together in some kind of mission or some kind of movement, and they work together really well when they're within the mission. There's a sense of a bond because of their joint commitment to the mission," says Kirschner. "But then when the mission ends, or if it ends, they just look at each other and find they have nothing in common."

"However, I've also seen it where couples come together like this and basically decide to stay on the mission the rest of their lives. And they marry and they stay on the mission. Their marriage is all about being together and helping each other fulfill their purpose in this mission," Kirschner says.

That's what happened to Carol and John Coonrod, who met in 1985 while working for several weeks in Washington on a book promotion for the The Hunger Project, an organization dedicated to ending hunger and poverty in the world.

"The last night when we all went out for a drink, we kind of looked at each other and noticed who we'd been working with all that time -- and we've been together ever since," said Carol Coonrod, 62, adding that her husband, 57, always says, "We're living happily ever after."

The couple, who have no children, are both on staff at the organization.

"We've had a relationship that was formed within The Hunger Project and that has always been our senior mission, part of a senior commitment," said Carol Coonrod. "And within that we've created a partnership and a marriage."

Their shared passion for their work has driven them during their more than two-decade marriage.

"As we've gotten older, we've sort of rediscovered the rest of life and we've continued to be partners, not only in work, but also in our leisure and the rest of our life. We're wonderfully compatible and enjoy vacation and nonwork time as much as working together," says the veteran volunteer.

The younger volunteer couple is still pondering their relationship.

"We're not trying to put pressure on ourselves, we are trying to have a good time," Chung says.

But they are certain about one thing.

"Our passion is to be down here with the St. Bernard Project," says Benty.

"You know, that is how life works," Chung said. "It works in strange ways. Stuff you don't plan on is the stuff you remember."

All About Hurricane Katrina • Volunteering