Why you're likely to marry your parent

By Celeste Perron
Special to CNN

(LifeWire) -- When Lynn Houston was 27, she met an affectionate young man during a business trip to Virginia. Although she lived in Arizona, the two began dating; they married six months later. But after she joined him in Virginia, he became distant and had angry flare-ups, Houston says. 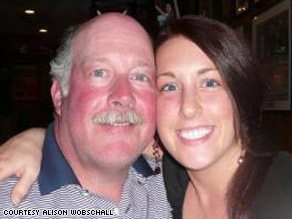 Dad Mike Chorley and husband Mike Wobschall agree on everything, according to Alison Wobschall.

He barely resembled the man she'd married, but he did remind her of another man she knew well: her father.

"They were both very emotionally unavailable and prone to outbursts of rage," says Houston, now 44 and a business consultant in Phoenix.

After six years of attempting to rescue the union through therapy, Houston filed for divorce.

Alison Wobschall also married a man like her father, but with much better results. "I have a great relationship with my dad, so I suppose I looked for a partner who shares some of his good qualities," says Wobschall, 22, head of marketing and public relations for a Minneapolis nonprofit.

Both men are "really interested in politics and the stock market, and they agree on everything," she says. "Also, when I'm upset about something, they'll always help me put it in perspective."

Both share the name Mike, and they even look alike. And Alison bears a striking resemblance to her mother-in-law, in appearance as well as personality. "We always laugh at the same things, even if nobody else is laughing," she says.

Although Houston's and Wobschall's marriages couldn't have been more different, both women chose partners who resembled a parent. And, say experts, their experiences aren't that unusual.

Berkeley, California, psychotherapist Elayne Savage says familiarity is a big reason people may choose someone like Mom or Dad as a partner.

"When you grow up familiar with a certain type of person, you're attracted to that same type of person because it feels comfortable, whether you like it or not," says Savage, author of "Breathing Room: Creating Space to Be a Couple." "That's what people mean when they meet a potential partner and say, 'It 'feels like I've known him my whole life.'"

Anecdotal evidence also suggests that a parent's physical or intellectual traits may have some influence. A Hungarian researcher studied the facial features of 52 families and found a significant correlation between the appearance of men and their fathers-in-law and those of women and their mothers-in-law.

And in a survey of approximately 2,700 "high-achieving" men -- those in the top 10 percent of their age income bracket and/or with an advanced degree -- a University of Iowa researcher found they are likely to marry women with education levels and careers that mirror those of their moms.

Miami resident Aaron Gordon, 27, wouldn't argue. Gordon's wife, Rebecca, 27, has the same career as his mom -- teaching gifted elementary-schoolers -- and the women share a love of cooking and talking on the phone.

"When I met Rebecca, she was pursuing a career in advertising, and it wasn't until well after we started dating that she decided she didn't like advertising and opted instead to get her master's in education," says Aaron. "Although I definitely wanted to marry an educated woman, I wouldn't say that it was critical that she match my mom's level of schooling -- though in the end, they both earned master's degrees."

Rebecca says Aaron is just like her dad. "The longer I'm with Aaron, the more I notice idiosyncratic things, like the fact that they both love politics, and are both bad drivers, and both love going to supermarket for like two hours and buying too much stuff," she laughs.

Sometimes, people choose mates who resemble their parents not because of fond memories, but to make amends for an unhappy childhood.

"This is most common if you felt rejected or abandoned by a parent and still haven't worked through it," says Stephen Treat, director of the Council for Relationships, a Philadelphia nonprofit. "Your psyche wants to go back to the scene of the crime, so to speak, and resolve that parental relationship in a marriage."

Women who felt abandoned by their fathers are likely to choose emotionally unavailable husbands, for example, and men raised by hypercritical moms will be drawn to wives who pick on them, he says.

It's not a good idea. "You think you'll be able to heal this way, but you're probably no more equipped to deal with the situation than you were as a child, and the parental dynamic gets repeated in your marriage, usually with bad consequences," he says.

Does that mean it's a mistake to marry somebody like Mom or Dad?

Casey Clark Ney, 30, hopes not. She and her dad, who is now deceased, lived in different states after her parents divorced when she was a child. Although they had a warm phone relationship, Ney only saw him once or twice a year, and he wasn't very physically affectionate.

Her husband, James, 31, resembles her dad and has a similar "hard-working, calm, kind" quality. But James, too, isn't very affectionate.

"He grew up in a family who didn't do a lot of hugs and kisses and 'I love you's, and that does bother me," says Ney, a freelance journalist in Boise, Idaho. "I think there could be some truth in the idea that I'm working through my history in my marriage."

Despite evidence that suggests some of us are attracted to mates who resemble our parents, it's not a foregone conclusion, says therapist Barbara Swenson, director of the Couple Center in Sherman Oaks, California.

"If you want very badly to have a different and better relationship than the ones you grew up with, you can accomplish that if you go about it very consciously."

• Don't jump in. "Ideally you should date for a couple of years before engagement -- and not just long distance," she says. "You need to be together on those days when your car won't start ... to see how you and your partner support each other."

• Don't be afraid to disagree. "Assert yourself and see what your partner does with that," she says. "Can they put their needs aside and follow your lead once in a while? Make sure your relationship has room for give and take."

• Talk about life issues. Some questions to discuss sooner rather than later: If we have kids, will one of us stay home? Who will manage our money? "Premarital counseling can get these questions out on the table in a civilized way, and prevent problems down the road," says Swenson.