Why women should feel good naked

(OPRAH.COM) -- For years Laure Redmond hated her body: too fat, too freckled, too lumpy, too stumpy. And that hatred was like a set of shackles holding her back from life. 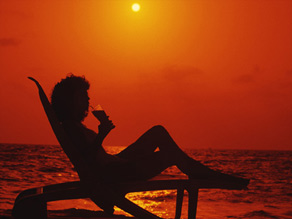 Author says she finds that women comfortable with their own body are nicer to other women.

Now a self-esteem coach who specializes in mind/body issues, Redmond has made a career of helping women and teenage girls get over what she calls their body demons. Her goal for them is summed up in the title of her 2001 book: "Feel Good Naked."

It's not about naked for naked's sake, she says it's about the amazing confidence that comes with being at ease in your own skin.

DEBORAH WAY: Let's be clear here: You're not advocating some kind of nudist revolution, correct?

LAURE REDMOND: (Laughs) No, streaking is not going to make a comeback as a result of my message. I just want women to feel good about their bodies so they can feel good about themselves -- because when a woman feels good naked, it shows. She has an allure that comes through in the way she moves or talks or laughs. Her confidence isn't rooted in her clothing size or facial features but in her attitude -- fun, delightful, free.

REDMOND: Yes, but it's not easy. For lots of women, even the word "naked" brings huge discomfort. I was volunteering at my child's school once when another mother, who had heard I was an author, asked me the title of my book. When I told her, she set down the envelopes she'd been stuffing, grabbed her purse, and left the building without saying another word.

WAY: Did that surprise you?

REDMOND: Unfortunately, no. I'm no longer shocked by negative reactions to the idea of nakedness. I call it naked fear. We button up. We shut ourselves down. We have an overwhelming paranoia about fat. We can't be free with our forms. Oprah.com: 9 ways to work your curves

WAY: Getting over our horror of our bodies must make things better in the bedroom.

REDMOND: Oh, yes. What's sexy in the bedroom is when you love your stuff, when you want to share it with your partner. But that's really just a bonus -- it's much broader than that. Being comfortable naked is the ultimate expression of self-confidence. If you're okay with being nude, you can take yourself anywhere in the world.

WAY: Where do you start?

REDMOND: Often, at the beginning. I don't mean that facetiously. I mean that it can be really helpful to reconnect to a time when you weren't always blaming yourself -- when you believed in and loved yourself. And for many women, that time will turn out to be back in childhood.

WAY: You're speaking from experience?

REDMOND: Yes. I was a chubby, freckle-faced little girl with frizzy auburn hair -- far from the visual ideal of 1970s New Orleans, where I grew up and where thin, blonde cheerleaders ruled.

But I had spirit -- I was a firecracker -- and a photograph I keep on my desk reminds me of that. I'm sitting cross-legged in our front yard, in shorts and a cropped top that were surely not a chubby girl's best outfit. Yet I look self-possessed, even somewhat certain that on that particular day at least, I was beautiful -- a femme fatale at the tender age of 6. The picture reminds me of the little girl who could, even when not much else around her supported such a healthy vision of herself.

WAY: What about someone who had an abusive or otherwise truly horrible childhood?

REDMOND: Even if your childhood was a total nightmare, the fact is you were a creature with enough gusto to get where you are today. Many women accept the opinions and judgments of others too quickly, which undermines self-esteem and personal power. But women who feel good naked have the ability to tap into their own source of self-love, without depending on the affirmations of others. A woman who feels good naked is a woman who's discovered her own definition of beauty. She knows that it's ultimately about personal attitude.

WAY: No doubt a lot of women would agree with that -- so long as you weren't talking about them. We can see beauty in others who aren't gorgeous in the conventional sense, but we're resolutely blind to it in ourselves.

REDMOND: That's because of our punishing culture. Men are rewarded for their bottom line; women, for their visuals. Our society is driven by an unrealistic ideal of physical beauty: More than 60 percent of American women are a size 12 or larger, yet we're bombarded by images of size 0s, which can fuel a barrage of insecurity and self-doubt.

Women from other countries have far healthier attitudes about the female form. I was in Puerto Rico recently with my husband, who rarely comments on other women's looks, and he was marveling at the number of beautiful Puerto Rican women on the beach -- women who by American standards would have been considered fat. I agreed with him.

WAY: How do you get away from those standards?

REDMOND: For one thing, turn off the TV -- especially if you find yourself biting your nails or eating a pint of ice cream while watching. Why spend the evening with actresses who remind you of what you visually aren't? Better to take a yoga class, sit down with a good book, or -- and this is my personal favorite -- watch a video of Tina Turner.

REDMOND: She was the source of my greatest body epiphany. I saw her perform in New York City in the late 1980s. She wore a black leather minidress and four-inch platform shoes, and watching her dance, I was transfixed. And then she stopped her electric gyrations, and I realized how substantial her legs were. They are bold and glorious, and she's turned them into art.

REDMOND: No, but women who feel good naked approach life with that same spirit of boldness, that same use-it-or-lose-it zest. And by the way, that spirit is very sexy.

I know a professor in his 50s who's been single much of his adult life and who's had relationships -- or at least relations -- with many women, some in their early 20s. At a dinner party recently, he told me that sex with a woman over 40 is way more pleasurable and satisfying than sex with a younger woman -- because a woman with the joie de vivre that comes from having a bank of life experiences is a much bigger turn-on than a youthful body.

REDMOND: I was delighted -- especially because part of my message is that the feel-good-naked lifestyle involves living with a sense of adventure. Eleanor Roosevelt was onto something when she said, "Do one thing every day that scares you." It doesn't have to be anything earth-shattering. I can't tell you how many of my former beets- or Brussels sprouts--hating friends have become converts in their 40s.

WAY: And what has that done for them beyond broadening their options in the produce section?

REDMOND: Eating is the most primal thing we do, and the way we do it inevitably carries over into other parts of our lives. It's the great metaphor. If you're going to try Brussels sprouts, you might be more likely to climb a mountain the next time you're on vacation. It's about breaking out of the fear zone. You're training yourself to move away from the world of "can't," "don't," "won't."

WAY: So women who feel good naked are adventurous eaters?

REDMOND: Adventurous, purposeful, and aware. I often hear women say they eat with blind abandon in an effort to avoid unpleasant feelings. Yet mindless eating will not eliminate these feelings. In fact, it compounds them, since in addition to carrying your mental pain, you won't be able to manage your weight effectively. Changing this destructive pattern means finding a balanced, sensible approach to eating that can become permanent because it's satisfying and sustainable.

REDMOND: Yes. I'm still amazed by how many women let themselves be ruled by eating disorders -- not anorexia or bulimia, but things like cutting out whole food groups or routinely skipping entire meals.

Women try to avoid accountability with eating; they tend to believe in the magical thinking of random restriction. But this means their lives are directed by deprivation. No wonder we're obsessive and compulsive about food.

On the other hand, when you eat with purpose and awareness, it's such a relief. You're happier, calmer, not constantly bitchy or tense. Suddenly you can enjoy social outings more, you can be more conscious of your interactions with other people.

WAY: When it comes to food, then, we need to back off the crazy rules we make for ourselves. Be a little kinder to ourselves.

REDMOND: Absolutely. And "kindness" is a good word, because it brings up another characteristic of women who feel good naked: They're kind to other women.

WAY: In what way?

REDMOND: They can genuinely take pleasure in other women's success, happiness -- and beauty. Just the other night I was eating dinner with a group of women who were speaking about another woman in our community, an attractive woman, in such a mean-spirited way that I had to excuse myself from the table. The source of that mean-spiritedness was clearly the woman's physical appearance.

WAY: Because when you're miserable with your own body, you've doomed yourself to "compare and despair."

REDMOND: It's the distorted sense that looks are everything. And women who view each other this way do a disservice to us all. When my sister and her husband were in the process of separating, at least two acquaintances reacted by telling her, in disbelief, "But you're skinny!" -- as if her physique should have cushioned her from heartache. If you have friends who base everything on their own and other people's appearances, ask yourself what you're getting out of the relationship. If it's mostly stress, it's time to find different friends.

WAY: Have you found that women are judged more harshly by each other than they are by men?

Laure: Yes. And there's this, as well: I grew up in a houseful of women and now I'm growing older in a houseful of men, and I'm here to tell you that teenage boys might just be the vainest creatures on earth. They're every bit as freaked out by their pimples, bad hair, and extra weight as girls are.

It doesn't stop when they leave adolescence, either. We all know what bald men go through, and new research from Harvard University's McLean Hospital reports that up to 25 percent of adults with eating disorders are male. So the next time you start worrying that the man in your life is going to judge you, remember that he has insecurities of his own. And he'd probably love to feel good naked too. Oprah.com: Do you want to feel good naked?

Laure Redmond, a self-esteem coach based in Portland, Oregon, is the author of "Feel Good Naked" (Fair Winds) and the founder of Self-Esteem Saves You, a program for teenage girls.