Editor's note: This is the first story in an ongoing series of reports CNN is doing about economic survival in this time of financial crisis. 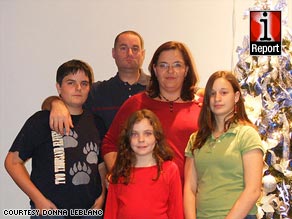 Sean, Brooke and Courtney with their parents, Donna and Robert LeBlanc, in a 2008 Christmas photo.

The Lafayette, Louisiana, family of six was struggling with $45,000 of mounting medical debt from Donna LeBlanc's unexpected case of pneumonia and tonsillitis a year earlier. The family savings account had dwindled to $100.

"It's embarrassing for my husband to take a job he is overqualified for, and I know he feels ashamed at times," says Donna LeBlanc, a 35-year-old mother with four children. "But this is what we have to do and we're going to make the best out of it."

She watched her husband, Rob LeBlanc, 35, load Domino's pizza boxes into their family car and deliver orders until near dawn for $10 an hour.

The family first told their story of falling on hard times on iReport.com. Share your economic survivor story with CNN.

Until last summer, Rob LeBlanc had worked as a manager at a truck stop restaurant, making $55,000 a year. He lost that job to the falling economy.

Rob LeBlanc says he noticed business at the truck stop getting sluggish a year ago. Then the spike in gas prices last summer exacerbated the restaurant's dire circumstances. Many penny-pinching truck drivers avoided his restaurant altogether, he says.

Rob LeBlanc filed for unemployment compensation immediately after he lost his job. More than 4.6 million Americans were collecting unemployment benefits as of early January, according to the Labor Department.

In Lafayette, a quiet city of about 114,000 tucked away in southern Louisiana, many of the jobs center around servicing the oil and gas industry, but Rob LeBlanc was unwilling to work offshore and away from his family.

When he applied for other jobs, he was told he was either under-qualified or had too much experience.

After several weeks of searching, he took the only job he could get -- a Domino's pizza delivery man, a job that would cover the family's expenses.

"I had to swallow my pride and take whatever I could get," Rob LeBlanc says. "I kept telling myself one of these days something better will come along."

He spent nearly five months delivering pizzas at Domino's. He admits he fell into depression during that time.

But the family received good news Friday, when a private security company hired Rob LeBlanc to be a security officer. He says the company offers many opportunities to move up to a managerial position.

"My first thought was to tell my wife right away," he says. "I could hear the relief in her voice."

Taking a job as a pizza man wasn't the only sacrifice he's made for his family -- he's also selling his beloved 2003 Kawasaki motorcycle.

Donna LeBlanc earns a few hundred dollars a week exterminating mosquitoes for a bug control company. Before her husband lost his job, she had talked of going back to school to pursue a biology degree at Louisiana State University.

The LeBlanc family lives lean in their five-bedroom, three-bathroom house with its $440 a month mortgage. The couple is teaching their children about budgeting and bargaining while relying on coupons and sales. They no longer eat out and no longer have cable TV. For entertainment, they attend free movies at a church. Donna LeBlanc takes pride that they have no credit card debt.

Their children Brooke, 9, Christopher, 14, and Courtney, 13, no longer receive allowances. Soon after her father's job loss, Courtney started cleaning houses and baby-sitting and earned enough money to buy a dress for her first school dance -- off the clearance rack.

The LeBlancs' oldest child, Sean, 16, who attends high school, still hasn't found a job. He says the competition has gotten stiff, with many older workers in the area out of jobs. "I'm trying," said Sean, who has been looking for a job since October. "There are just no openings."

The LeBlancs have found some unexpected happiness. Donna LeBlanc says her husband now spends more time at home. Not being able to leave the house for entertainment has brought the children closer together over books, games and conversation.

"This experience has given us time to reconnect with each other," Donna LeBlanc says. "And it's taught us to just keep trying and believe that things will get better."