Slights, insults and snarky remarks -- she collects them

(OPRAH.com) -- It was a beautiful -- no, a perfect -- day. Until a kindly but clueless grandma asked The Question That Must Never Be Posed to Any Woman, Ever. In the spirit of forgiveness, this columnist resolves to breathe in and let go...but not before recalling a landfill of grudges, slights, insults, and snarky remarks. 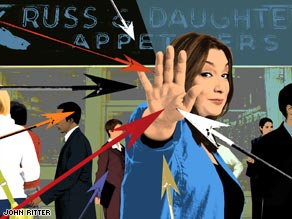 About three weeks after my daughter, Julia, was born, I was standing in line at Russ & Daughters, a lovely little shoebox of a shop that's been serving the most exquisite Jewish delicacies ever since Mr. Russ loaded up his pushcart and headed for the Lower East Side of Manhattan in 1908.

I was ordering smoked butterfish and nova, sliced thinner than angel wings, as the guys behind the counter plied me with samples of apricot strudel and raspberry rugelach. It was spring, my baby was healthy, Russ & Daughters had just put out their marble nut halvah, and all was right with the world.

I was experiencing what the late, great Spalding Gray used to call "a perfect moment." Please note, Mr. Gray didn't talk about perfect days, he didn't even refer to a perfect half-hour stretch. Nope, he only suggested that there are moments when life is inexorably sweet, but those moments are few and far between -- and generally over before you can capture them on the teeny camera in your ridiculously tricked-out cell phone.

The adorable grandma to my left decided to strike up a conversation: "So, how long have you been coming here, dear?" She smelled like Pond's Cold Cream and cinnamon, and I liked her immediately.

"Well, ma'am, my aunt Bernice first brought me here when I was just a kid," I answered between bites. She smiled warmly and told me she grew up right around the corner, on Orchard Street, and had shopped here since the 1920s. "I raised five children on this food," she said, pointing to the baked blueberry farmer's cheese. We were soulmates in sable, partners in pickled herring; we spoke the language of lox. And that's when it happened.

My new buddy suddenly reached out her bony little liver-spotted hand, patted my baby-free middle, and asked the one question nobody should ever ask: "When are you due?"

I toyed with the possibility that she had some sort of death wish. Perhaps the question was actually a thinly veiled plea. I mean, isn't it plausible that what she was really saying was "I want to go out on a high note, so I'll just have a taste of chopped liver, and then do something so heinous that it drives this perfectly reasonable woman to club me to death with a side of salmon"? Oprah.com: How to survive a verbal ambush

You see, there are certain questions that must never be asked:

1. Has your surprise party happened yet?

2. How did you first learn that your husband is cheating?

I don't care if the woman you're asking is wearing a T-shirt with a giant rhinestone-encrusted arrow that points to her belly and reads BABY ON BOARD. I don't care if she's writhing on a gurney in the birthing room of Mount Sinai hospital, screaming for an epidural as an obstetrician announces, "One more push and the baby will be out!" You never, let me repeat, never, ever, under any circumstances, ask a woman when she's due.

Some people collect coins, some prowl the Internet for vintage guitars; I know a woman with a closet full of antique Kewpie-doll heads. I'm not totally clear what turned her against everything from the neck down -- she may have been frightened by a Barbie breast as a child.

But I'm nobody to judge, because I, too, am a collector. What I collect are slights, digs, withering remarks, and the occasional mean-girl glare. I examine a good when-are-you-due story from every angle, I trade them with friends, I commit them to memory, I savor them for eternity.

Here are a few of my favorite insults:

My old friend Suzanna remembers the first time she had her Hungarian husband's family over. She cooked for three straight days. The woman goulashed and paprikashed and put her tomato sauce through a food mill, for God's sake. At the end of the meal, her new mother-in-law took Suzie's hands in hers, looked her straight in the eye, and said: "I'm so glad you feel you can practice on us." Ouch.

My former roommate Laurie came home with an A+ on her test and proudly handed the paper to her father. "Interesting," he said. "I always thought you had to be really smart to get this kind of grade." Kaboom.

My pal Faye tells the story of spending an entire evening with a guy she met when they both reached for the same stuffed zucchini blossom at a fancy fundraiser. He suggested they get together the very next day for a picnic in Central Park, and she was delighted to take charge of the fried chicken and potato salad. The next day she waited and waited. Two hours, one drumstick, half a pound of red bliss potatoes, and five weeks of dieting down the drain later, Faye picked up the phone: "What happened?" His reply: "Well, I honked...but you didn't come out." Yikes.

I bring Jules to the pediatrician for her annual checkup. "Would you say she's unusually tall?" I ask, hoping that she'll someday be able to reach all the stuff her 5'2" mother cannot.

But it's a brand new year, and I've resolved to make a few changes. I don't want to lock and load when a nasty comment comes my way, but I also refuse to duck and cover. Instead, I am going to answer clumsiness with equanimity, bitchiness with compassion, and verbal violence with disengagement.

I think it's a damn good plan -- wise, tolerant, even kind of Zen. If I play my cards right, I could be crowned Miss Mental Health 2009! There's just one teeny, tiny problem: I honestly believe Metallica's next-door neighbor stands a better chance of getting a good night's sleep without ear plugs and an Ambien than I stand of actually getting this plan to work. But that certainly doesn't mean it's not worth a try.

So I will seek, to paraphrase Saint Francis of Assisi, not to be understood but to understand. I will send my collection of slights to Sotheby's and have them auction it off to the highest bidder, one dig at a time, and if none of my attempts at happiness and harmony pays off, well then, I'm heading for halvah at Russ & Daughters.