Is Obama inspiring black men to step up? 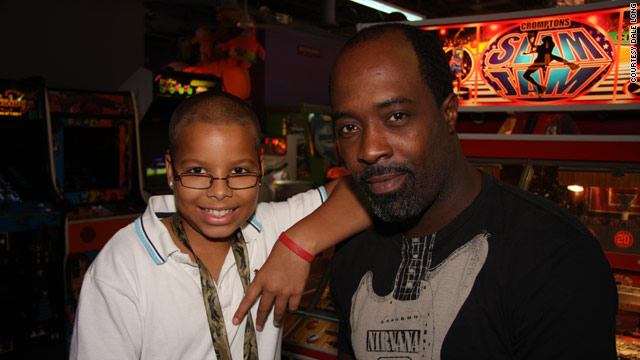 (CNN) -- The Natural Edges Salon in Dallas, Texas, is a rowdy barbershop where black men gather to loudly talk smack, politics and sports.

But on one wintry November morning last year, the men suddenly stopped talking. Someone turned the radio off, and the barbers' clippers stopping humming. A man had just challenged the customers' manhood.

The man was President-elect Obama. He was giving a televised speech challenging men to get involved in their communities.

The men had heard the message before, but this time they could relate to the messenger. Obama had shared their struggles -- raised by a single mom, never really knowing his father -- but had never used his struggles as an excuse.

Nor could they anymore, some of the men decided. Seven joined Big Brothers Big Sisters of America that morning, barber Michael Johnson says. One of them was Johnson, who says he grew up without his father but was saved by the friendship of an older man. iReporter: 'Obama has helped me as a father'

"I just said, 'You know what, I can do this today instead of tomorrow,' " Johnson said. '' 'Tomorrow may be too late. I can save a young man's life today.' "

As the nation approaches the first anniversary of Obama's election, the glow of Obama's ascendancy may be fading. But it's still burning bright for some black men. Inspired by Obama, a growing number of black men across the nation have decided to become mentors and pledged to become better fathers, community leaders say. iReporter: 'I'm a good baby daddy'

"I've never seen anything like it," said David Miller, co-founder of the Urban Leadership Institute in Baltimore, Maryland, a group that works with other civic groups to mentor black and Latino boys.

"I have seen a renewed sense of hope and optimism that's unprecedented," Miller said. "I was at the point where I was starting to give up."

How black men are stepping up their game

It could be easy to overstate Obama's impact on black men. Some say they see no change in black men's conduct since Obama was elected. And few would say that a black man sitting in the Oval Office is going to wipe out the challenges black men have faced for generations.

But black leaders say something across the nation seems to be stirring.

Three of the nation's largest black fraternities have formed a partnership with Big Brothers Big Sisters of America. The fraternities -- Omega Psi Phi, Alpha Phi Alpha and Kappa Alpha Psi -- are holding a summit in Atlanta, Georgia, in December to decide how to recruit more black men as mentors.

Although they didn't reach their goal, a record number of black men -- 650,000 -- participated this year in an annual Million Father March. The nationwide march was organized by the Black Star Project, a nonprofit group based in Chicago, Illinois.

A foundation headed by billionaire George Soros, an Obama supporter, is investing $15 million in a three-year campaign to help black men. Soros' Open Society Institute designed the Campaign for Black Male Achievement to improve the lives of black men and boys by offering grants to groups across the country.

Numbers tell some of the story, but Obama's biggest impact on black men might be psychological, Miller says.

"I use Obama as a sort of an unofficial national spokesman when I talk to men about responsible fatherhood," Miller said. "I show black men multiple images of Obama with his children and his wife. Even with the criminals and the thugs, they get excited."

Black men still need to step up, say some who work closer to the issue. iReporter: 'Obama a testament to evolving white America'

At the Atlanta chapter of Big Brothers Big Sisters, Rita Owens, the vice president of development, says she hasn't seen any more black men volunteer since Obama was elected.

And Karen Mathis, president and CEO of Big Brothers and Big Sisters of America, says the need for black men is still urgent. She says that about 40 percent of the boys waiting to be matched in the program are black. But only 15 percent of the mentors are black men, she says.

A legacy of mentoring for three generations

Perhaps Obama's effect on black men can't ultimately be measured by numbers but by mentoring relationships that often take years to nurture.

When Johnson, the Dallas barber, decided after hearing Obama's speech that he wanted to be a big brother, someone was there to sign him up. The Alpha Phi Alpha fraternity had dispatched volunteers to Johnson's barbershop to sign up black men as big brothers that day.

But Johnson also had an example from his own life to inspire him. He was mentored since he was 9 years old by one of the men responsible for forging the partnership between black fraternities and Big Brothers Big Sisters of America.

That man is Dale H. Long, national chairman for Alpha's partnership with Big Brothers Big Sisters of America Partnership. Johnson made Long the best man at his wedding when his own father declined to attend.

"I wanted to give back just like Dale took time out of his life to give back," Johnson said. "[Long] had a family, but he chose to be a big brother to me."

Long said, "Obama can't do it by himself." He decided to "step up my game" even more after Obama was elected.

"In order to be a man, our boys have to see men," Long said.

And be encouraged by men as well. When Long learned that his former little brother, Johnson, had decided to be a big brother, he drove to Dallas to make sure he was at Johnson's side when he signed up.

"I was just thrilled beyond belief," Long said. "That let me know that I was of some kind of value to him."

Now Johnson is passing it on. He spends each week with Kedrick Howt, an 11-year-old Dallas boy. They go to movies, play basketball and talk about growing up without his father.

"I can almost picture myself when I was his age, going through what he's going through," Johnson said. "It's like, some days, I'm looking in the mirror."

"My son shut down," she said. "He stopped caring. He didn't want to talk to anybody."

Johnson says her son has changed. He made all A's and one B on his latest report card. He seems happy, and he no longer talks back.

"He's made an incredible difference," Howt says of her son's big brother. "I had given up all hope of him being a good black man. He's made my job easier."

Kedrick sounds giddy when he talks about his big brother.

When asked about Obama, Kedrick didn't have much to say. Big issues like the Obama effect on black men are off of his adolescent radar for now.

So is the prospect of growing up without an older man to guide him into manhood.

When asked what his life would be like without his new big brother, Kedrick paused.