With this rage, I thee wed 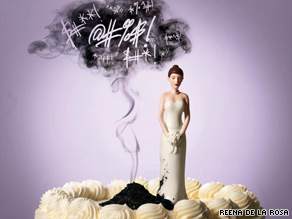 It's better to break the silence over secrets in your marriage before the silence breaks you, author says.

Lacey sipped and sighed. "I want a husband like yours," she told me. "Someone who reads me love poems over breakfast."

I just smiled. After 26 years, Bob and I do still spend summer days as we did the July we got married: camping along Northwest rivers, fly-fishing, drinking Champagne.

The demands of our professional lives (both of us are writers and teachers), the rigors of child rearing, the empty nest we are fluffing, cross-country moves, money woes -- the pressures that so often destroy a marriage, ours has survived.

To Lacey, it seemed a storybook romance. What she didn't know was how close I had come to leaving the marriage she idealized. I'd never told her the flaw I'd chosen -- that Bob was a wrathful man.

When I met Bob, I was 22. He was seven years older, seven inches taller, and I was enthralled by his intellect, his passion, his hair (oh, his hair! dark, thick like an animal's fur, hanging down in his eyes, curling at his collar...).

He'd sung in a rock band, been a conscientious objector during Vietnam, and was now a talented poet and teacher. I watched him weep over the death of John Lennon and rail against wrong-minded politicians.

And soon after we moved in together, I got my first glimpse of his rage. Oprah.com: 5 ways to derail rage

The lawn sprinkler that failed to oscillate? Bob beat it into the ground, gaskets flying.

The chain saw that wouldn't run, he pitched against a tree until it snapped into pieces.

I laughed when I recounted these slapstick incidents to friends. Who was he hurting, after all?

I was 25 when Bob asked me to marry him. Moderate in his consumption, balanced in his ambition, kind to my parents, and lustful only for me: If an occasional temper tantrum was his only flaw, I should count myself lucky.

But one afternoon the summer we married, Bob and I were driving back from the store when we found ourselves behind an elderly woman at a traffic light.

She hesitated, not sure if she wanted to turn left or right. Bob grimly rode her bumper. "Get off the road, you old bag!"

As we roared by, he flipped her off; on her face was a mix of befuddlement and fear.

Over the next year, Bob's outbursts became more frequent, until one morning, in the middle of an argument whose subject neither of us remembers, he picked up the wooden table at which we were eating breakfast and brought it down so hard it shattered.

I backed to the wall. Mouth twisted, Bob grabbed my arms. "Why are you making me do this?" he said through clenched teeth.

I shook my head, unable to make sense of the question, afraid to attempt an answer.

A few months after our fourth anniversary, our daughter was born; her brother, two years later.

Raising children raised the stakes. Waiting in line at a McDonald's drive-through made Bob furious.

His rage was like a sudden squall -- I spent my energy keeping his anger from swamping us all.

Our children sometimes laughed at his tirades, sometimes cowered, and as they grew into adolescents, they often rolled their eyes -- even as I worked to hide my increasing fear that I was staying in a marriage I was simply too proud to leave.

Torn between self-doubt and shame, I kept on keeping my secret, though I still longed for someone to tell me: How would I know when it had gone too far?

The answer came one day as Bob and I were driving down the highway to the hardware store.

I was fretting, imagining the minor mishap that would turn our little jaunt into hell on wheels (a flat tire, someone's badly parked car, an inept clerk), and wondering aloud if I should have just stayed home. I had become that little old woman at the light, unsure of which way to turn.

Suddenly Bob hit the brakes, cranked a U-turn, and brought us to a sliding stop, cursing my indecision so cruelly that I sat paralyzed, afraid he might gun the car back onto the highway.

Back home, I gave him an ultimatum: See a counselor, or our marriage was over. Oprah.com: Three women, three problems, three therapies

And maybe this is the difference between a flaw and a fatal flaw.

Even though it meant exposing his failures, Bob chose to keep our marriage alive.

We made appointments separately and together.

Talking to the therapist filled me with dread: dread that the problem was not Bob's temper but my own prideful expectations; dread that I was betraying him; dread that I had allowed myself to be victimized; dread that we were broken and couldn't be fixed.

"You can save this marriage," the therapist told us, "but you've got to understand what's causing the problem."

She explained that when caught in conflict, the brain releases adrenaline and cortisol, inducing the fight-or-flight response. Never one to turn tail and run, Bob chose to bully the world into submission.

But when I was the one who defied him, he felt the conflict as rejection. His terror then led him to rage at the very person he feared losing: me.

It wasn't easy for Bob to accept that the anger that puffed him with strength was a shield against vulnerability, or that each act of physical and verbal violence was an indirect threat against me.

Along with assigned readings and exercises, the therapist gave Bob a palm-sized thermometer.

"When you rage," she said, "blood is diverted from your extremities to your vital organs, and your fingers turn cold. Count to ten. Focus on calming down, letting your hands warm up by degrees. Make it a habit. Practice."

It's been more than a decade since that initial appointment. At first, when his temper flared, Bob would grasp the thermometer, take a deep breath.

He discovered other ways to engage his daily frustrations: taking long walks, imagining that the driver in front of him was someone he loved, remembering that he wanted nothing in the world to frighten me, least of all him.

My change, too, came by degrees, first by revealing Bob's rages to the therapist and then to a few close friends.

"There's so much good in Bob," some of them told me. "He wants to do better. That's what makes the difference."

Another friend said, "I'd have left him years ago." Later she would confess that she, too, was given to rages, a secret shame that made her sure she could never be wholly loved.

And so, as I sat in the wine bar, listening to Lacey mourn the impending loss of her second marriage, I posed my query, reminding her that she'd already eliminated lust.

She twirled the glass in her fingers. "Not pride," she finally said. "My first husband hid his debt and drove us into bankruptcy. I didn't know until I got the call from the attorney. We lost everything. I couldn't live with the betrayal."

"I never told anyone."

I've come to realize that you never know the secrets of someone else's marriage -- but that when it comes to your own, it's better to break the silence before the silence breaks you.

I couldn't hear the truth until I gave it voice, and neither could Bob.

By reaching out for help, we chose to leave the isolated island of shame and blame and hitch ourselves to something truer than a perfect marriage: a union defined by our desire to grow beyond our flaws.

Today Bob's rages are a thing of the past, the occasional tremors like the fading aftershocks of an earthquake (and my zero-tolerance policy proof of my own shored-up foundation).

Still, when Lacey turned the tables on me -- "What flaw would you choose?"-- I didn't give it a second thought.

And then I told her why. What I saw in her face was disappointment and relief: My marriage wasn't so perfect after all, yet somehow it had survived. Could she, should she allow her soon-to-be ex a chance to redeem himself?

I didn't have an answer, only an ear. Oprah.com: The most useful communication technique of all time