(CNN) -- It may have a fairy tale ending -- a story of perseverance and second chances that's playing out live on the public stage of online networking. 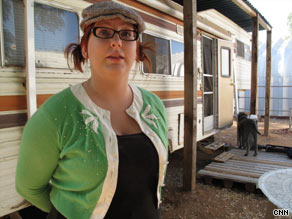 But 24-year-old Brianna Karp's story started as a nightmare.

In a rocky economy, Karp was laid off from her Irvine, California, job as an executive assistant in July 2008.

She got by for a while on temp jobs and unemployment benefits. But when her savings dried up, she was no longer able to afford her rent.

The only answer she saw then was a trailer she'd inherited from her father -- a man she barely knew who had recently committed suicide.

"I was left with a truck and this camper, which I was going to sell but coincidentally this happened to me," she said. "I thought, 'Well, I have this.' "

Karp, who writes that she is also estranged from her mother, ended up camped in a Los Angeles-area Walmart parking lot.

"The first night, I think, in the Walmart parking lot was the scariest," she told CNN. "I was panicking, and I was just afraid."

As she spent five months looking for jobs and blasting out resumes, often spending hour after hour at a coffee shop to take advantage of its free Wi-Fi connection, she also started blogging. The result, the Girl's Guide to Homelessness, chronicled the ups and downs of her new life.

She reminisced about adopting her dog, named for a character from the movie "The Princess Bride," and mulled the pros and cons of having a pet while homeless. She recounted details from failed job interviews and offered tips for other homeless women.

"I was trying to stay positive and cheerful," Karp said. "I started writing the blog in a tongue-in-cheek way to kind of laugh about my circumstances, keep them chronicled. I didn't think anyone would actually read it."

But people did, including Matt Barnes, formerly homeless himself and running a Web site about his own homelessness issues in Scotland.

He asked her to write for his site and would eventually become Brianna's boyfriend.

Another big break came through a shot at the weird world of reality television.

Karp applied for a show that would offer contestants the chance at a job with Elle magazine advice columnist E. Jean Carroll.

She was granted an audition for the show and, by her own account, totally botched it.

"I went back and blogged about bombing the interview and made fun of myself," she said.

On a lark, she then wrote to Carroll via her column.

"Dear E. Jean: I'm currently homeless and living in a Wal-Mart parking lot," her e-mail began. "I'm educated, I have never done drugs and I'm not mentally ill. I have a strong employment history and am a career executive assistant. The instability sucks, but I'm rocking it as best as I can."

She told Carroll about her poor interview for the show and finished the note with the question, "How does one get another shot when one screws up a job interview? -- Homeless, but Not Hopeless."

Carroll said she was floored by the note.

"[The phrase] 'I'm living in a Walmart parking lot' hooked me," she said. "I thought, she's so ready to work, obviously she can write, she's got some skills."

Her response appeared in the August issue of Elle -- she offered Karp an internship and a chance to write a fashion blog for the magazine.

"I think she's a new voice," Carroll said. "She's a voice we haven't heard, and I'm excited for her future."

Not that all of her troubles were instantly over. Last month, she wrote, Walmart finally had her trailer towed, and she has now parked her mobile home at a friend's house outside Los Angeles.

She's also still seeking that elusive full-time job, while hoping her newfound high profile will help spread the word about homelessness, and how it can happen to the most unlikely people.

"If you saw me walking down the street, you wouldn't assume I live in a parking lot," she writes on the blog. "In short, I am just like you, except without the convenience of a permanent address."

All About Job Losses • Blogs and Blogging • Homelessness • Elle Magazine