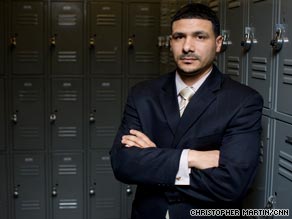 During his daily morning hallway inspections, he reprimands a student not wearing the Capital Prep school approved sweatshirt with a "That's not our gray." He then quickly peers into another classroom to witness a student acting up. "Don't do it! Don't do it! Don't do it!" he warns sternly. The student retorts "Why not?" Perry knowingly looks at him and simply says, "You're the upperclassman" and with that, the student sheepishly walks away.

It's all part of the daily routine of tough love and high expectations at Capital Preparatory Magnet School in downtown Hartford, Connecticut. It's a public magnet school, with a college prep school attitude. As Perry says, "If you don't want to go to college, don't go to Capital Prep. Go somewhere else."

Perry's demanding approach has yielded big results. The school of just under 300 sixth- through 12th-grade students boasts a near 0 percent dropout rate. That's a stunning achievement considering Hartford is one of the lowest performing districts in Connecticut, a state with one of the largest achievement gaps between black and white students in the nation. According to the Connecticut Coalition for Achievement NOW, an educational advocacy group, black students in Connecticut are, on average, three grade levels behind their white peers.

Capital Prep, a year-round school that is more than 80 percent black and Latino, can boast of sending every graduating member of its senior class on to a four-year college. In the four years since Perry founded the school, he has sent 80 students on to college.

See how Capital Prep is defying the odds »

Perry founded the school with the specific purpose of creating a school that would serve students with backgrounds similar to his. Born to a teenage mother, Perry grew up impoverished in a public housing project just outside Hartford. He recalls, "I had to be a principal at some point, or a prisoner, because I spent more time in the principal's office than the principal."

But it was Perry's fourth-grade teacher, Mr. Kensel, who saw the potential in Perry and set him straight. Perry knew he wanted to do the same for others.

"We decided we were going to open a school. We were going to serve mainly black and Latino children, but the only color I was looking at was the color of success," says Perry.

Perry has achieved that by holding staff and students to the highest expectations.

Breonna Arnum, 17, a senior at Capital Prep, believes it works.

"It makes a difference because everybody has the same goals as you. So it's not like anyone is there to pull you back. Everyone is going forward," Arnum says.

Her mother, Waynette Arnum, agrees. She believes it's a particular boon for students of color to be immersed in an environment with high demands.

"When you're in a school system and people look like you, and they're just as bright as you are, and they're kicking those As out and those 96s and 97s like you, you also know that you're surrounded by people just like yourself who are achievers," says Waynette Arnum. "And it's not an anomaly; it's not something that's rare."

She believes that seeing success is imperative, because black children need role models who look like them. Sound off: How can we keep our kids in school?

In addition, she says black children are too often overlooked.

"I think that students of color are automatically stereotyped sometimes when they go into school systems that are predominantly white," says Waynette Arnum. "The stereotype that there's no father in the home, that the parents don't care; we have a plethora of stereotypes -- that the kids have behavioral problems, that the boys should all be put on Ritalin or something of that sort. Yes, these are definitely issues."

These are issues all black parents must face, says Angela Burt-Murray, editor-in-chief of Essence Magazine. Burt-Murray is the mother of two black boys and she and her husband are not only parents, but also advocates for their children.

"It starts with formulating that relationship with the teacher, letting the teacher know that you are an involved and concerned parent," says Burt-Murray.

Waynette Arnum agrees that parents have to speak up. That's exactly what she did.

"I definitely had to sit there and let the teachers know, let the school system know, let the parents know and let my daughter know that yes, I am an advocate," says Arnum. "And, all students deserve to learn equally."

Arnum believes Breonna was overlooked in elementary school, simply because of the color of her skin. It prompted her to not only stand up for her own daughter, but also to join a Students of Color Committee in the town of Manchester, Connecticut.

"There were definitely issues that were particular to my daughter that later I knew would be particular to all students of color. So that's how come I had to be involved," recalls Arnum.

Arnum believes if she hadn't stood up for her daughter, things could have turned out differently.

"I feel as though if I hadn't started off the way I had, Breonna still would have slipped though the cracks, even though we push her at home," Arnum says.

Perry, the dedicated principal, agrees that black children can frequently be the victims of stereotypes. It's the reason he pushed so hard to create an environment where everyone was held to the same expectations.

"In our school, it's college prep for everybody; it doesn't matter if you're black or white. They can see that it's OK for them to be smart and black," says Perry.

All About Education • African-American Issues