Editor's note: Leah Ward Sears stepped down this week as Chief Justice of the Georgia Supreme Court. In 1992, she became the first woman -- and youngest person -- appointed to Georgia's highest court.

ATLANTA, Georgia (CNN) -- After Tommy's sudden death, we found among my brother's personal effects a questionnaire he had completed in 2005 for a church class. 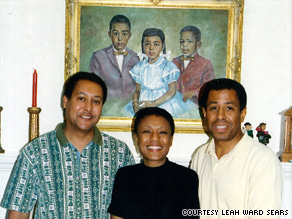 The very first question was a fill-in-the-blank that went like this: "At the end of my life, I'd love to be able to look back and know I'd done something about ....."

When asked to identify something that angered him that could be changed, Tommy wrote, "Re-establishment of equity and balance and sanity within the American family."

My brother was born to be a father, and he grew into a good and loving one. Tommy was tall and handsome, smart, witty and fun. A graduate of the Naval Academy and a Stanford-educated lawyer, he married and fathered a little girl and boy who were the center of his life.

Tommy felt that one of the worst problems in our country today was family breakdown and fatherlessness. He railed against intentional unwed childbearing and the ease with which divorce was possible. He didn't like that we have become a society that values the rights of adults to do their own thing over our responsibility to protect our children.

As a judge I have long held a front row seat to the wreckage left behind by our culture of disposable marriage and casual divorce that my brother so despised.

No-fault divorce was a response to a very real problem. The social and legal landscape that preceded it largely prevented casual divorce, but it often trapped people in abusive marriages. It also turned divorces into even uglier affairs than they are today, forcing people to expose in court damaging information about their children's other parent. That system was intolerable, and we should never go back to that.

But no-fault divorce's broad acceptance as an unquestioned social good helped usher in an era that fundamentally altered the seriousness with which marriage is viewed. It effectively ended marriage as a legal contract since either party can terminate it, with or without cause. This leaves many people struggling to remake their lives after painful divorces that they do not want. It also left many parents cut off from, or sidelined in, the lives of the children they love.

When Tommy divorced, as in so many cases, a bitter struggle over resources and the children ensued. My brother came to believe that the legal system turned him into a mere visitor of his children.

Tommy eventually accepted a job as a lawyer for the State Department and went to Iraq (and later to Dubai) in order to make the money needed to support his children. Being in a war zone, under terrible conditions without the children he loved, was unbearable to him.

On November 5, 2007, my phone rang before daybreak. A U.S. Foreign Service officer was on the other line. Was I the sister of William Thomas Sears?

I knew before I was told what had happened. Tommy had died. But the cause took my breath away: My brother had taken his own life.

I know I'll never understand fully all that factored into his decision to kill himself. No doubt Tommy was wrestling with more demons than he had ever admitted to me or knew himself. But as a divorcee myself and, for a number of years, a single parent, I know the immense pain of divorce and its aftermath. The limitations the law placed on Tommy's right to raise his own children after his divorce magnified my brother's pain and was, I believe, more than he could live with.

Tommy was only 53 when he committed suicide. That was more than a year ago, and I am still learning to live without him and live with the fact that this man I looked up to all my life chose to end his own life.

Tommy's loss has catapulted me even farther down a path I was already on. This may sound like heresy, but I believe the United States and a host of Western democracies are engaged in an unintended campaign to diminish the importance of marriage and fatherhood. By refusing to do everything we can to stem the rising rate of divorce and unwed childbearing, our country often isolates fathers (and sometimes mothers) from their children and their families.

Of course, there are occasions when divorce is necessary. And not everyone should marry. But it has become too easy for people to walk away from their families and commitments without a real regard for the gravity of their decision and the consequences for other people, particularly children.

Removing no-fault divorce as a legal option may not be the right way to move forward, and the solutions we need may not be entirely legal in nature. But answers must be found. The coupling and uncoupling we've become accustomed to undermines our democracy, destroys our families and devastates the lives of our children, who are not as resilient as we may wish to think. The one-parent norm, which is necessary and successful in many cases, nevertheless often creates a host of other problems, from poverty to crime, teen pregnancy and drug abuse.

The loss of my brother has changed my life, as these losses so often do to people. This summer, after 26 years, I'm hanging up my robe as a judge to return to private practice.

I will spend some of my time teaching a course in family law at the University of Georgia Law School. And I have accepted a fellowship at the Institute of American Values in New York -- a private, nonprofit, nonpartisan organization that contributes intellectually to strengthening families and civil society in the United States and the world.

At my request, the fellowship is named after my brother. As the William Thomas Sears Distinguished Fellow in Family Law, perhaps now I can truly do "something about fathers" -- a mission I'm on for Tommy and a critical calling for all of us.

The opinions expressed in this commentary are solely those of Leah Ward Sears.

All About Family • Parenting • Child Development