Teens with special needs get a prom to remember

WASHINGTON (CNN) -- Going to the prom is a highlight in many teenagers' lives. But attending a prom isn't always an option for some young people, including those with special needs. 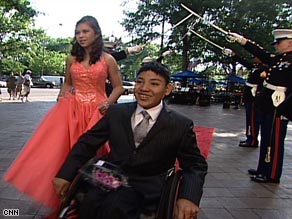 Alex Gonzales passes under the Marines' sword arch Saturday in Washington as he arrives at the prom.

That's where Helen McCormick comes in.

"We are dreaming for children who are excluded from their proms, and ... you're going to see people walk through the doors who are going to be just absolutely mesmerized," said McCormick, president of a Virginia-based nonprofit called The House, Inc.

For the past four years, McCormick has organized a prom specifically for children with special needs.

This year's prom, dubbed "The Cinderella Ball," was held Saturday night at the Willard InterContinental Hotel in Washington. More than 150 teens attended the gala, where they were greeted by 41 Marines. Each one of the teens went down a red carpet, under a Marine Corps sword arch, before being seated for dinner.

Watch scenes from the spectacular prom »

"Their social life is very limited at school and outside school as well, so something like this is very good because they come to a place where they find themselves with people that they can relate to," Gonzales said.

This was Alex Gonzales' first prom and he said he had a great time. "Coming to an event like this -- I think it's a great experience," he said.

The entertainment for the evening was 2007 "American Idol" winner Jordin Sparks.

"I think it's so amazing with all the kids that they get to have their prom. They get to dress up and feel really beautiful and have this night dedicated to them," Sparks said.

Most of the teens attending the prom were accompanied by a parent or friend. Some of them brought dates. It was a night many of them said they wouldn't forget anytime soon.

Victor Padgett attended the festivities with his daughter, Dede. He said events like these prove that the human spirit is alive and well.

"There is hope. There is love, and there is compassion for everyone," he said.

All About Jordin Sparks