(CNN) -- Sidney Frank made millions marketing Jagermeister and other alcohol brands. Three years after his death, he's a big hit with students at the Ivy League college he briefly attended. 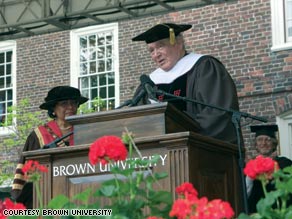 He's a big hit not because of what he sold but because he's given dozens of them what he couldn't afford as a young man: an education at Rhode Island's Brown University.

On Sunday, 49 students from low-income families became the first four-year Sidney E. Frank Scholars to graduate from Brown, owing virtually nothing except gratitude to the late liquor magnate.

"The world of difference that he made for each and every one of us is unbelievable, incredible," one of the Frank Scholars, 22-year-old Shane Reil, said Sunday.

Frank -- who left Brown after one year in the late 1930s because he couldn't afford to stay -- gave the school a $100 million endowment in 2004. He stipulated that the fund's income go exclusively to covering all tuition and expenses for the neediest of Brown's admitted applicants.

For this year's graduates, tuition and expenses came to a four-year total of about $180,000 each. The median annual income of the recipients' families was $18,984.

The gift was the largest single one ever given to Brown and one of the largest ever given for undergraduate scholarships in the United States, according to the school.

Reil, a history major who is preparing to co-chair a student conference on U.S.-South Korean relations and aspires to work in politics or foreign service, says the scholarship was the stuff of dreams.

He was working up to 40 hours a week during high school so he could pay for clothes and even help with grocery bills. He and his mother were getting by, but the Massachusetts native thought community college or a big state school would be all he could afford.

When his academic achievements put Brown in his sights, he thought he'd have to go into too much debt to go there. But he applied anyway, and Brown invited him to campus to tell him about how much the school would award him.

Reil said he cried in the office and ran to his car, where his mother was waiting.

"She was crying so much, we had to sit in the car for so long because she couldn't drive. It was a great moment," Reil said.

"Having the opportunity to go to a really good school ... I think it took my world from a very small area and physical space and just expanded it in multitudes," he said.

Though other universities give full rides, Frank's gift was a coup for Brown. Like many other schools, Brown used to factor a family's ability to pay when deciding whether to accept students.

Brown no longer does that, and Frank's gift was "integral" in bringing the change, said Jim Miller, Brown's dean of admissions.

The school intends to give 30 to 35 Frank scholarships per year. Most recipients are the first in their families to go to college, Miller said.

That was the case for Eliana Reyes Castro, who was born in the Dominican Republic and came to the United States when she was 6. She said she attended a Massachusetts high school that had regained its accreditation only months before she graduated.

Like Reil, she was one of the Frank Scholars who graduated Sunday. She received a degree in education with a concentration in human development and will pursue a master's in secondary social studies and history at Brown.

She might have attended Brown even if she had to take out loans. But that might have taken her away from what she wanted to do -- teach -- in favor of something that she had less interest in but paid more, she said.

"Just teaching right after college ... might not have been as appealing if I had loans to worry about," Reyes Castro said.

Frank, though he went to Brown only one year, landed an engineering job at Pratt & Whitney in part because someone there had gone to the school, said his daughter, Cathy Halstead. The company sent him overseas and he worked on Allied airplane engines during World War II, she said.

Eventually he got into the liquor business, started the Sidney Frank Importing Co. and marketed Jagermeister and Grey Goose vodka in the United States. He took up Jagermeister in the 1970s, sending attractive young women to bars to persuade patrons to try the drink and coming up with the Jagermeister tap machine.

He created Grey Goose, had it distilled in France and brought it into the United States through importers. In 2004, he sold Grey Goose for $2.2 billion, said Halstead, 61, of Seattle, Washington.

When Brown gave him an honorary degree in 2005, not long after his gift and months before his January 2006 death, people gave him a hero's welcome, she said.

He gave millions of dollars to other institutions and projects. As for the Brown scholarship fund, he started it because he saw that Brown had changed the course of his life, Halstead said.

"He really wanted kids who were coming from very economically challenged backgrounds to have the chance to make it all the way through," said Halstead, who attended Sunday's graduation ceremony.

Reil and Reyes Castro said they couldn't thank Frank enough if he were alive.

"What he did is a catalyst for a lot of great things, and I'm indebted to him to do the best with the education that I've gotten here to help people in any way that I can," Reyes Castro said.

All About Sidney Frank • Brown University