A black woman's journey to the rabbinate in North Carolina

(CNN) -- When Alysa Stanton officially becomes a rabbi in June, she'll be walking into history. 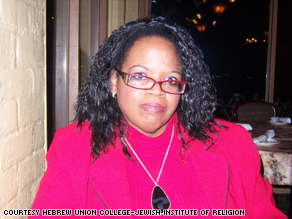 Alysa Stanton, 45, will become the first African-American woman to be ordained as a rabbi next month.

Stanton, 45, will be ordained June 6 in Cincinnati, Ohio, where she received her master's degree from the HUC-JIR, which is the rabbinical school of the Reform movement. Then in August, she will begin her new job at Congregation Bayt Shalom in Greenville, North Carolina -- long a Conservative synagogue and now affiliated with both the Reform and Conservative movements.

She describes her new position with great enthusiasm, saying the congregation -- while small -- has a lot of children, a sign of a bright future. And she says the congregation is vibrant and the region, where East Carolina University and a major medical center are located, is dynamic as well.

"My goals as a rabbi are to break down barriers, build bridges and provide hope," Stanton told CNN. "I look forward to being the spiritual leader of an inclusive sacred community that welcomes and engages all."

The HUC says the milestone reflects the diversity that permeates Jewish life.

Citing numbers from the Institute for Jewish and Community Research, the HUC-JIR says at least 20 percent of American Jews -- about 300,000 to 400,000 people -- "are racially and ethnically diverse by birth ... conversion and adoption. Approximately 20,000-30,000 marriages between Jews and African-Americans grew out of the civil rights movement. "

"This diversity, reflecting the variety and richness of Jewish heritage, is embraced by the Reform Movement of Judaism, with its commitment to inclusivity," the HUC-JIR said.

A Cleveland, Ohio, native from a Pentecostal Christian home who moved to Colorado at the age of 11, Stanton was first exposed to Judaism as a child and converted more than 20 years ago during her college days. She is a single mother of an adopted 14-year-old daughter and a psychotherapist.

How did she come to convert?

"It's been a journey, and it started when I was very young," she told CNN. "I was a seeker."

Judaism, she realized, fit her.

"People have asked me, 'was I born Jewish?' I said yes, but not to a Jewish womb."

She said she drove every week between Fort Collins and Denver to study with a Conservative rabbi in an Orthodox synagogue and eventually had a traditional conversion in 1987.

But why did she step from the role of an active congregant to pursue the arduous rabbinical education? The idea percolated in part in Denver, where she was active at Temple Emanuel. Among the factors that led her to rabbinical school, she said, were her appreciation of the role of cantors, the beauty of chanting Torah and learning of a middle-aged man who didn't let his age get in the way of entering rabbinical school.

As for Bayt Shalom, she said it's in an interesting part of the South -- more transient and more diverse because of the college population. The congregation is small, made up of about 60 families, and the position for now will be part time.

"We're hoping for growth and outreach," she said. "There's a lot of opportunity."

Before her rabbinical training, she studied social psychology, neuropsychology and interpersonal relationships at Lancaster University in England in 1983-84; received a Bachelor of Science degree in psychology in 1988; earned a Master of Education degree in counseling and multiculturalism in 1992 from Colorado State University; and received a professional counselor license in 1998.

Stanton worked as a student rabbi, served as a chaplain, had clinical pastoral training and promoted interfaith dialogue at Reform communities in the United States. She studied at the HUC-JIR campus in Jerusalem and then at Cincinnati, Ohio.

She said her daughter experienced racial bigotry in Israel, but that reality toughened her and did not deter her from her goals or her love for Israel and its people.

"I learned that my child and I are stronger than ever dreamed possible," she said of life in Jerusalem. "I learned the tenacity of the human spirit goes a long way. I learned there are some great people in this world."

Michael Barondes, Bayt Shalom president, said Stanton "was quite impressive" to the rabbinical search committee of the small, Jewishly diverse congregation in a "one-synagogue town" in the Bible Belt founded in 1975.

"Rabbi Stanton energized this community in a way that was really impressive, across all lines. I think that she's a special person," Barondes said.

"I think you would have to be a special person to unite a diverse Jewish community," said Barondes, saying it's rare to have one congregation affiliated with both the Reform and Conservative movements.

He said Stanton has a special interest in pursuing work in a small community.

"There's a different flavor of Judaism when you are in a small town. There's much more volunteerism, much more involvement. There's something very rewarding in that," he said.

The congregation at present doesn't have black members, but Barondes said a previous rabbi had converted several African-Americans. As for the rabbi's part-time role, Barondes said it's "more like two-thirds' time."

The present rabbi of the congregation, Steven J. Kirschner, said in a note to congregants in the synagogue's newsletter that "I know that you will welcome Rabbi Stanton with open arms, and I hope that she will be a dynamic force in the growth and spiritual development of the CBS community for many years to come."

Stanton said she's excited to be there and "they are excited to have me."

"I'm glad to be a visual presence of the diversity that is represented in Judaism," she said.

All About Religion • African-American Issues • Judaism