(CNN) -- Never underestimate the power of Oprah or a free meal. 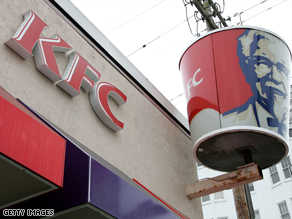 That seems to be the lesson KFC is learning after talk-show titan Oprah Winfrey took to the airwaves Tuesday with an offer of a free grilled chicken two-piece meal.

Hungry consumers could visit Oprah.com, where for the next 24 hours they were supposed to be able to download a coupon for the meal that included two pieces of the company's new grilled chicken menu item, two side orders and a biscuit.

What ensued was a coupon craze that was for some a headache.

Customers flooded KFC restaurants, and many had long lines and even longer wait times. iReport: Watch a video on the frenzy

Bloggers took to the Web in waves to report on the frenzy. Customer complaints ranged from the inability to download the coupon because of the site's high traffic to some restaurants simply not honoring the deal.

"I'm a big girl," Shannon Edwards told CNN affiliate WBAL-TV in Baltimore, Maryland, on Thursday after she was turned away from a KFC. "I like to eat. So I'm kind of disappointed I have to go to McDonald's now."

Charlotte Beal, a food and beverage consumer strategist at the consumer insights firm Iconoculture, said it was a perfect storm of the astronomical influence of Winfrey and the recession.

"In this economic environment, anything free you can't beat it, and it's just so enticing," said Beal, who added that her company has been tracking the increase of coupon usage, especially those available online.

"It's a well-known fact that Oprah's been transparent about her own struggles with weight and diet so when she partners with a company that's trying to offer a healthier product, consumers really listen."

"Not only are you attracting the people who are strapped for cash and want a free meal, but you also are enticing the whole Oprah audience that relates to her own struggle of trying to find something healthy to eat," Beal said.

"If you make a commitment and you don't produce on that commitment, you lose your credibility and that ripples throughout the company," Marcus said. "It hurts your brand, and it hurts your position in the marketplace."

Winfrey is "a powerhouse" whose fans cannot be denied, he said.

"I think they underestimated Oprah," Marcus said. "She's got a lot of influence, and she has earned a following over many years."

In a press release Thursday night, KFC said that after the "unprecedented and overwhelming response" restaurants would no longer honor the coupon but would provide a rain-check program for customers.

"We would like to apologize to our customers who have been inconvenienced by the overwhelming response to our free Kentucky Grilled Chicken offer," said Roger Eaton, president of KFC U.S. "The lines of customers wanting to redeem their coupons have been out the door and around the block, so we're unable to redeem customer coupons at this time."

Eaton appeared on Winfrey's show Friday via Skype to sort out what she referred to as the "chicken caper."

Winfrey acknowledged some of the issues surrounding the campaign, and called the download of 10.5 million coupons and giveaway of $42 million worth of free food from KFC "quite a hookup."

Eaton said 4 million meals had been redeemed by using the coupons, with 6.5 million meals from rainchecks still needing to be distributed.

Winfrey said the reaction to the chicken coupon surpassed even her giveaway of cars to audience members a few years ago.

The coupon craze is not the first time chicken lovers have gotten fried over a good deal. Recently, KFC competitor Popeyes experienced a similar problem when some of its franchises ran out of chicken during a promotional eight-piece deal for $4.99.

All About Oprah Winfrey • KFC Corporation