(CNN) -- First lady Michelle Obama was expected to make headlines in Europe with her style and flair as she accompanied her husband to the Group of 20 summit, but it was a simple gesture that has set off a media frenzy. 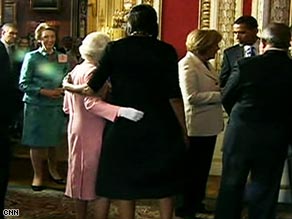 While meeting Britain's Queen Elizabeth II in London on Wednesday, the two women briefly embraced -- not your typical scene at Buckingham Palace.

The British media called it everything from a breach of protocol to an extraordinary show of affection from the queen.

The Times of London proclaimed it a "touching moment," and the palace apparently agreed.

"This was a mutual and spontaneous display of affection and appreciation between the queen and Michelle Obama," a palace spokeswoman said.

CNN: According to our tabloids in the United States, the meeting went really well. What's your take?

Mosley: Absolutely. What is astounding is the picture of the queen with her arm around Michelle Obama and Michelle Obama's hand around the queen, too. But the queen made the first move. This is the most astounding thing because the queen is not known for being touchy-feely. Indeed, her son Prince Charles complained on one occasion that he wasn't given enough affection when he was a child. She's obviously a late developer.

CNN: What's the big deal [about touching the queen]?

Mosley: The big deal is that the queen is normally a sacred person. In monarchies, there's a sacredness that surrounds the sovereign, which is perhaps not known in republics, at least not all the time in the way that it is in a monarchy. She's been on the throne a very, very long time, and she is herself a very dignified person, all the more so because of her relatively short stature.

Watch to see if "hugging" the queen broke protocol »

One of the things one saw yesterday was the way [President] Obama and Michelle towered over the queen and indeed Prince Philip.

CNN: By the queen putting her hand on the small of Michelle Obama's back, does that signal friendship? The queen said something to Michelle Obama toward the end of the meeting about keeping in touch.

Mosley: Certainly, keeping in touch is meant quite literally. Yes, it's a very significant gesture; she's not known for this kind of thing.

amFIX: Your thoughts on Michelle Obama and the queen

CNN: Let's talk about the other gesture: the gift of the iPod. Some tabloids are calling it the "i-Dud" in the sense that this wasn't a great present to give the queen. What do you think?

Mosley: Not a bad one at all. The queen is actually quite technologically advanced. She uses e-mail to a much greater extent than most members of the royal family and particularly much more than her son, who is a bit of a technophobe.

CNN: [The queen gave the president a silver-framed photograph of herself and her husband.] Was it a recent picture of the queen and Prince Philip at least?

Mosley: That I don't know. If it's the same as she gives everybody, it must be a sort of middle period picture because it would have to cover so many years. On the other hand, it may well be that this gesture of terrific friendship and affection for Michelle Obama was her way of saying, "Sorry, I should have given you something more personal."