(CNN) -- Andrew McMahon always wanted to be a rock star. When his band, Jack's Mannequin, started touring in spring 2005, the unexpected happened. 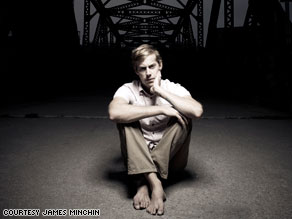 Andrew McMahon, singer for the band Jack's Mannequin, was diagnosed with leukemia in 2005.

Four years later, McMahon, now 26, is still at it. He has a new album out called "The Glass Passenger" and has taken the driver's seat in starting a cancer research organization, the Dear Jack Foundation.

CNN's Nicole Lapin spoke with McMahon about living and working with cancer and now singing about it. The following is an edited transcript of the interview.

Nicole Lapin: For those people who don't know, you were formerly the front man for Something Corporate. When you started touring there, you had a bout with leukemia. When you were 22, you were diagnosed. What happened there? You first thought it was just fatigue, but it was something a lot worse.

Andrew McMahon: Yeah, I was on the road. It was actually Jack's [Mannequin's] first tour; we had actually just finished recording "Everything in Transit," which was my first record apart from Something Corporate.

I was on the road and just kept losing my voice. It was just this thing that I couldn't figure out. I always had kind of this really durable voice and was known for being able to go out all night and wake up the next morning and be signing like a bird.

Sure enough, I went to my voice doctor in New York City after having to cancel a show, and he thought I looked pale and didn't think I looked well, and he took my blood. They sent me to the hospital for more tests, and I found out the next week [that I had leukemia].

Lapin: But you kept touring.

McMahon: No, after that point I was in the hospital. I started in New York and eventually flew back here and was treated at UCLA by a great doctor there. I spent the better part of six to eight months kind of battling back from that. I had a stem cell transplant from my sister in that period of time, and I eventually got back on the road the following summer.

All About Leukemia • Cancer