(CNN) -- When J.R. Martinez returned from serving in Iraq, he never thought he'd see his name on the marquee at the local restaurant -- but there it was, a welcome-home banner at the Applebee's in Dalton, Georgia. 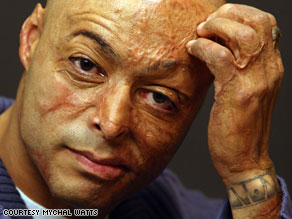 More than 40 percent of J.R. Martinez's body was burned in a land mine explosion in Iraq.

He certainly never imagined he'd be starring in a popular daytime soap opera, either.

But Martinez, 25, has never let the severe burns he received while serving in the United States Army stop him.

He spoke with CNN's Nicole Lapin about overcoming odds and being an inspiration for young people.

J.R. Martinez: Well, April 5, 2003, I was driving a Humvee through a city called Karbala in Iraq. My job in the military -- in the Army -- was infantry, and as we were driving, my front left tire hit a land mine and I was trapped inside the vehicle.

The other three guys, the other three soldiers walked away with minor injuries, which I'm thankful for every single day. I was trapped inside the vehicle for about ten minutes, conscious and can literally see my life slipping away from me. You know, my mother is my best friend and I kind of had the visual of my mother, and them handing her a flag and I thought to myself, that's not something I want to put my mother through.

So it's one of those things where we don't know how strong we are until we're faced with things in life and I got through it.

Lapin: You did. [A viewer] has a question for you about what kept you going. She says, "First of all, I want to sincerely say thank you for defending our freedom. My question is, during the time of the explosion, how did you keep yourself going?"

And the day of my injury when I was inside the vehicle and I can literally see my life slipping away, an actual visual of my sister came to me and told me I was going to be OK and told me I'd be fine. And after that sweet whisper went away, they pulled me out of the vehicle and got me immediately into the medical team's hands.

So I guess you could say faith, my sister, my mother -- all the things that kind of kept me grounded as a young child that my mother instilled in me at a young age: to be strong and to hold on to certain things in life because they'll get you through.

Lapin: You just do it.

Martinez: Yeah, you just do it. All of us had it inside us. We just don't know it until we're faced with it and that's when the true strength really shows.

Lapin: Well, you went through 32 surgeries over 34 months. Was there ever a time where you said, "Woe is me"?

Martinez: Yeah, I'm definitely human and there are a lot of bad days. Even being in the soap opera world, there are still days where you wake up and you're like, "Here we go again."

Another obstacle [is] where I have to go into the public and show my face and catch those looks of people here in New York. It's one of those things where you've just got to get through it, and you've got to fight the obstacles and you've got to be strong and you say, "You know what? I have hope and I believe and I'm never going to quit."

And if you do those things, you'll be surprised where your life can take you because, as I said in one of the interviews I did, only in America where this can happen, you can go from losing your life to now being on a soap opera.

Lapin: We're looking at a picture of you in a soap opera right now, "All My Children." J.R., sitting in that hospital bed watching soap operas with your mother, did you ever think you'd actually be in one?

Martinez: You know, it's funny. You've got to be careful what you wish for in life. When I was in the hospital I couldn't move. I couldn't do anything. I was basically at the hands of medical staff and my mother, and every night my mother would watch novela, the Spanish soap opera.

And there wasn't nothing I could do about it. So I just sat there. And finally I just got to a point where I'm just going to take it in and watch TV with her. And one day out of a joke I said, "One day I'm going to be on a soap opera, mom."

All through my recovery I started to do motivational speaking. I became a spokesman for a non-profit called the Coalition to Salute America's Heroes, which helps wounded troops who return from Iraq and Afghanistan. And I always thought to myself, "In the midst of all this, I would maybe love to touch that world some day, just to kind of play with it for a little bit." And here I am.

Lapin: So you had a little premonition.

Martinez: Yeah, so you've got to be careful what you wish for in life because you never know what can happen.

Now, in the role in "All My Children," it's a veteran who falls in love and because of his disfigurement, he doesn't know if that person is going to accept him. He kind of feels that it's best for her to move on with her life and not to be a part of his and his struggle.

Lapin: [Another viewer] has a question. He wants to know, "Your story is amazing. I wanted to ask you if it has been tough to relive the terrible pain of your real life during your filming of 'All My Children'?"