Author: 'I make HIV real to them'

ATLANTA, Georgia (CNN) -- Even though African-Americans make up only about 13 percent of the United States' population, they account for almost half of the people who contract HIV and are diagnosed with AIDS. 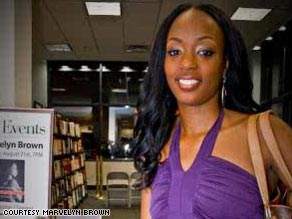 Marvelyn Brown, 24, is the author of "The Naked Truth: Young, Beautiful and (HIV) Positive."

Around this year's Black AIDS Day on February 7, activists are out trying to educate the public about the disease.

Among those speaking out is Marvelyn Brown, 24, the author of "The Naked Truth: Young, Beautiful, and (HIV) Positive."

Brown spoke with CNN's Nicole Lapin about living with disease, defying stereotypes and inspiring others.

Nicole Lapin: After 30 years [since HIV was identified] I'm curious that the disease really gained a lot of awareness. Do you think people's perceptions have changed? Do you think the stereotypes still exist?

Marvelyn Brown: See, the thing about HIV is that I think people are aware of it. They've heard of it, they know of it. They're just not educated about it. I've had the opportunity to look at some of the comments that people were making. Just looking at the comments you could see, you could tell that people had a misconception of HIV as a whole.

Lapin: What is that? What's the misconception?

Brown: That it's a certain group of people. I know [February 7] is Black AIDS Day, which is perfectly fine because it does affect the black community. But this is a human disease, one that affects us all.

When I tell you I was shocked because I contracted a virus that I thought I was immune from, I immediately put it on gay men, IV drug users, prostitutes. I never thought someone like myself, whoever that was, could contract HIV. When I go and I speak, that's the main thing that I hear. People are constantly telling me I make HIV real to them.

Lapin: It speaks to [a viewer's] question, "What do you think is the most effective way to teach young women about HIV and AIDS?" Because it seems like they relate to you. They get you. You're their peer.

Brown: That's the thing. Just simply be open and honest with them. I've found that more effective, just me telling my story and not holding back. Especially with my autobiography, "The Naked Truth," I just opened up. I was so vulnerable and people could relate to that.