Numb and number: Is trillion the new billion?

NEW YORK (CNN) -- In that strange intersection of economics and politics, there is a new fashion: Trillion is the new billion. 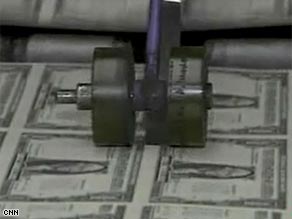 One trillion $1 bills stacked one on top of the other would reach nearly 68,000 miles into the sky.

To provide some perspective on just how big a trillion dollars is, think about it like this: A trillion dollars is the number 1 followed by 12 zeroes. Or you can think of it this way: One trillion $1 bills stacked one on top of the other would reach nearly 68,000 miles (about 109,400 kilometers) into the sky, or about a third of the way from the Earth to the moon.

Some Republicans are hardly over the moon about the growing size of the proposed economic stimulus plan. Senate Republican leader Mitch McConnell said this week that Americans have become desensitized to just how much money that is.

CNN business correspondent Christine Romans keeps crunching the numbers from a look at what's moving the markets to how it will impact your wallet.
Weekdays, 6 a.m. ET

"A million dollars a day for 2,000 years is only three-quarters of a trillion dollars. It's a big number no matter how you slice it," Paulos said.

Here's another way to look at it.

Everyone is tossing around the words million, billion and trillion. With the national debt now topping $10 trillion, following a $700 billion bank rescue and proposed $800 billion-plus stimulus package, have we become numb to the numbers?

How much is a trillion? »

" 'Number' itself can be parsed 'number' or 'numb-er.' And maybe in this case, the latter is a better pronunciation," Paulos said. "I think to some extent, we have ... evolved in a context where such big numbers were completely foreign."

Perhaps a better way to get a "grasp of the numbers," Paulos said, is to use them to describe the budgets of government programs.

"The [Environmental Protection Agency's], for example, annual budget is about $7.5 billion. So, a trillion dollars would fund the EPA in present dollars for 130 years -- more than a century. Or the National Science Foundation or National Cancer Institute have budgets of $5 [billion] or $6 billion. You could fund those for almost 200 years," he said.

Back in 1993, President Bill Clinton wanted a $30 billion jobs and investment package. He didn't get it. Just last year, President George W. Bush signed an emergency economic stimulus of $168 billion --- a tally that seems paltry compared with the amount requested today.

The economic problem, many say, demands huge spending. Former Federal Reserve Chairman Paul Volcker has called it "the mother of all crises."

The numbers are big, but so is the United States economy. The gross domestic product, which measures the total value of goods and services produced in a country, is about $14 trillion. Still, many wonder if we can afford it.

"So we do have a big economy that may not be as vibrant as it was, but it is still a powerful economic engine. Knock on wood, we'll see what happens," said Paulos.

Last week, the House passed an $819 billion emergency stimulus, and the Senate version is approaching $900 billion. In the end, whatever lawmakers hash out probably won't reach $1 trillion. But consider this: If all of the financial market interventions, loans, guarantees, bailouts and rescues are approved, they will total more than $7 trillion.