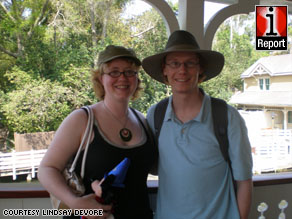 (CNN) -- At age 23 and fresh out of college, Eliot Kohan was diagnosed with an aggressive form of leukemia. He was told he had four months to live.

He survived. But the disease left him and his wife, Lindsay De Vore, who live in St. Paul, Minnesota, saddled with thousands of dollars of medical bills on top of their student loans and daily expenses.

But their struggles taught them an important lesson in saving money.

"When you have medical issues, it's easy to spiral into some sort of depression," the 26-year-old a technology analyst for a private contracting company in St. Paul said.

"My goal was to keep moving forward. I wanted to create some stability for our us."

All of that hard work saving for the past few years has paid off.

The couple is elated to be closing next month on their first home in St. Paul, thanks to the troubled economy.

The timing couldn't have been better for the couple to purchase a modest three-bedroom, one-story stucco house. De Vore and Kohan locked into a historically low mortgage rate of 4.9 percent this month. The couple selected a foreclosed home, slashing nearly $20,000 off the final price.

"We wouldn't have been able to buy this house if the economy weren't the way it is," said De Vore, 25, who works in the financial aid office at a private college in St. Paul. "We were in the perfect position."

There were more than 300,000 foreclosure filings reported nationwide in December, marking a 17 percent increase from the previous month and a 41 percent increase from December 2007, according to RealtyTrac, a foreclosure listing service. Meanwhile, unemployment continues to climb to rates unseen in decades. Yet the rocky economy is having a positive effect on some Americans, who are finding it the ideal time to buy a home.

Similar to many married couples, Kohan and De Vore envisioned owning a house perhaps two or three years down the road, they say. Soon the couple says they noticed interest rates and home prices dipping so low that they found themselves nabbing a home as soon as they could afford the down payment.

But the couple's ability to afford their first home is a story about fiscal responsibility, patience and determination.

De Vore and Kohan, who met in their freshman year at St. Paul's Hamline University in 2002, moved into a two-bedroom apartment during their last year of college. For the past five years, they have remained in the same collegiate apartment, furnished with Craigslist finds and family hand-me-downs.

"Money was a reason we've stayed here so long," Kohan said last week, bundled up with his wife because their apartment's heater broke. "But at a certain point, we felt like we were growing out of it in more ways than just physically. We wanted a change of pace."

The couple says they've always been tight with money, keeping credit card usage limited to emergencies and being picky about what they spend their money on.

But they became more "money-conscious" in June 2006, when Kohan was diagnosed with leukemia. He needed a costly stem cell transplant, and the couple did not have enough money. The sickness was evident in his frail face and bruised body.

Luckily, when he went on leave from his job, his employers offered to hold his position until he recovered. Back in his hometown of Fergus Falls, a small city in western Minnesota, Kohan's family and friends threw a benefit, raising $12,000 toward the costly medical bills.

He soon recovered, but the experience forced him to refocus his goals in life, including buying a house..

The couple began saving in small ways. They bring their lunch to work and eat out only once or twice a month. They cut extra expenses that many couples in their 20s enjoy, such as nights at bars with friends and date nights to the movie theater. To save on gas money, Kohan takes public transportation, a 45-minute bus ride each way, to downtown Minneapolis for work.

"The house was a big motivation," says De Vore, who tracks their expenses meticulously each month.

When the couple married a year after his leukemia diagnosis, she opted for a small, intimate wedding. That helped cut costs too, she said.

They waited nearly nine months before heading on their honeymoon trip. Instead of a grand trip abroad, they settled for a smaller trip to Orlando, Florida.

Knowing that higher education would help her earn more, De Vore is taking night classes to earn her master's degree in student affairs. Her tuition is free because she chose to attend the university where she works.

By December, the couple began to realize all the saving had amounted to a down payment on a home. They wanted to invest in a home for at least 10 years, they say, so they can try to build equity.

De Vore found the home through a real estate agent on her lunch break one afternoon in early January. It was "nothing fancy," she says, but the 1960s ranch-style house had a spacious kitchen and a small yard with enough space for a dog that they want. She knew instantly that it would be their new home, she says.

"We worked hard. We didn't cut corners," she said. "We did everything we did to get here, and it's worth it, to our opinion."