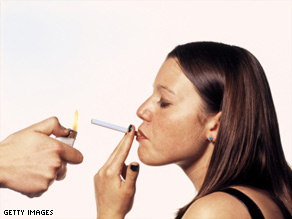 Smokers with high levels of a carcinogen byproduct (NNAL) are at higher risk of developing lung cancer.

Smoking is a lot like Russian roulette: You never know who will end up developing lung cancer and who won't. But Dr. Jian-Min Yuan, as well as other researchers from the University of Minnesota, say they are one step closer to determining a smoker's risk for developing the disease. In a study, they tracked the carcinogen and nicotine levels in nearly 500 smokers through a simple urine test and discovered a link between the level of a specific carcinogen and lung cancer. Their findings were presented at the American Association for Cancer Research conference.

Why did researchers track only the levels of one carcinogen?

We all know that tobacco smoke is bad: It's loaded with 60 different carcinogens, which cause all sorts of health risks. There is one carcinogen in particular that researchers suspected for years contributed to human lung cancer. But there were never any scientific human studies showing this relationship. This carcinogen is known as NNK. It releases into your body when you inhale smoke, quickly passes through the liver, gets metabolized and releases NNAL, a byproduct of NNK, into the bloodstream. University of Minnesota researchers were tracking the NNAL levels via urine samples.

How much did a person have to smoke to develop high levels of NNAL?

The exact amount is a little tricky to determine because a lot depends on how honest a person is about how many cigarettes he or she smoked per day. Additionally, the type of cigarette and how deeply a person inhales could affect the amount of carcinogens in the body. Researchers say a person with high levels of NNAL and high levels of nicotine (equivalent to smoking about a pack of cigarettes a day) is 8.5 times more likely to develop lung cancer compared with a smoker with lower levels. While the researchers point out that not everyone who has a high level of NNAL is going to develop lung cancer, it does help assign a number to a risk that was hard to quantify before.

Isn't smoking bad for you regardless? What is the benefit of having this type of information?

There is nothing healthy about smoking. Even if this test pegs you at low risk of developing lung cancer, it doesn't mean you won't develop a dozen other cancers commonly cause by smoking. If you smoke, the No. 1 thing you should do is quit. But that is easier said than done. If it were easy, 23 percent of adults in the United States would not smoke regularly. One benefit of knowing whether a smoker is at increased risk for lung cancer is for his or her doctor to screen the person regularly for abnormalities, in the hopes of catching the cancer early.

Lung cancer is but one consequence of smoking, so this type of testing is not going to fix everything. But as far as lung cancer goes, it may give people a better idea of when and how often to get screened.

Background
We spoke to Dr. Len Lichtenfeld, deputy chief medical officer at the American Cancer Society, to put this study in perspective for the everyday smoker. Here is an excerpt of our interview:

How significant is this research?

"This is a very well done scientific study, but still in the very early stages. I think the big story here is that they were able to find a relationship between the more carcinogen a person has in their body and the more risk they have of developing lung cancer. So the more you smoke, the higher your risk. And although we've known that for years, this is the first big scientific proof of that relationship.

"Right now, we don't know why some smokers get lung cancer and some don't. This study says that we've established that there is a relationship between this specific carcinogen and how your body metabolizes it. It seems to be a pretty clear predictive value: the higher level, higher the lung cancer risk.

"The natural tendency is for people to read studies like this research and want to go to the office next year to be tested, but it's nowhere near this yet. Just use your common knowledge for now. You don't need to get a urine test to tell you that if you smoke a pack of cigarettes a day, you are at increased risk for lung cancer."

What is your bottom line advice for smokers?

"The reality is, no matter how many studies are conducted, we are never going to [predict] that certain people are immune to cancer. We may find people who develop it when they've had little exposure, and some people who get it after smoking for 20 years. We often like to pigeonhole things but there are so many unknowns and variables. I can tell you that I don't know one doctor that would tell a patient to 'keep smoking because you have a low level of NNAL in your body.' Even if your risk is low for lung cancer, it may be high for heart disease.

"So if you smoke, it is time to quit. Visit the American Cancer Society's Web site for tips and tools on how to get the process started."