Is chronic pain ruining your relationship? 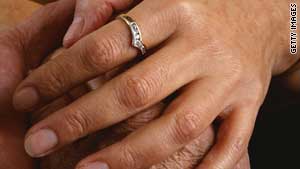 Chronic pain conditions can take a toll on relationships when a partner feels unsupported.
STORY HIGHLIGHTS

(Health.com) -- Athena Champneys, 37, has been in near-constant pain since 2003, when she was diagnosed with fibromyalgia, a chronic condition characterized by widespread pain and tenderness. Her husband hasn't always been 100 percent sympathetic, however.

"I was in so much pain that I couldn't bend over to put on my own shoes or socks," recalls Champneys, who lives in Salt Lake City, Utah. "And my husband was like, 'You've got to be kidding me! Get up and deal!'"

Fibromyalgia affects an estimated 5 million Americans (80 to 90 percent of them women), but until relatively recently many doctors have pooh-poohed the condition. Women like Champneys have long been told that the pain is "all in their head," a message that their partners have sometimes taken to heart as well.

Champneys' husband, Adam, acknowledges that he found himself growing skeptical as Athena grew more disabled by her condition. "I started doubting whether it was real," says the 36-year-old real estate agent. "I even started doubting our relationship, because I was having to do a lot of the same things for her that I have to do for our children. She was in her 30s, but it was like taking care of an 80-year-old grandma."

She was in her 30s, but it was like taking care of an 80-year-old grandma.
--Adam Champneys

The Champneys' experience isn't unique. Chronic pain -- whether it stems from fibromyalgia, back pain, arthritis, or some other condition -- can have a toxic effect on relationships, especially if one partner is skeptical about the source or the severity of the pain, and the other feels that he or she isn't receiving the proper understanding and support.

"People who have chronic illnesses desire support from their loved ones," says Annmarie Cano, an associate professor of psychology at Wayne State University, in Detroit, Michigan. "We all want to feel loved and cared for, but if the people around us are not supporting us the way we want them to, we might become resentful and feel like we are entitled to support."

But let's face it: Hearing about pain can be a drag, and if you're the one in pain, the strongest potential sources of support -- your partner, spouse, or kids -- may simply tune you out when you talk about it. The good news is that how you talk about pain matters. There are things you can do that can help you win -- not lose -- your loved ones' support.

Why expecting more help can backfire

Cano has studied the unhealthy dynamics that pain can create among couples like the Champneys.

In a study in the December 2009 issue of the journal Pain, Cano and her colleagues followed 106 couples in which one partner had a chronic pain condition, such as arthritis or back pain (the most common condition). The researchers found that people in pain who felt entitled to more support from their partners were more likely to have excessive or exaggerated perceptions and thoughts about the extent of their pain and the disability it caused. (This is known as catastrophizing.)

They just wanted their emotional distress to be accepted by their partner.
--Annmarie Cano, associate professor of psychology
RELATED TOPICS

Catastrophizing isn't a healthy or successful coping strategy; in fact, it's associated with higher levels of pain, distress, and depression. It's also associated with passive ways of asking for help -- a strategy that tends to backfire as well, according to Cano.

"If someone expects other people to provide support but doesn't know how to communicate directly what he or she would like, that person might express their frustration indirectly, by sighing, moaning, or engaging in other behaviors that might seem off-putting to the other person," she explains. And if the person in pain doesn't receive the help they want or expect, says Cano, he or she might react with anger or disappointment.

"Meanwhile, the other person had no idea of what was expected," she says.

Michael E. Geisser, a professor of physical medicine and rehabilitation at the University of Michigan, in Ann Arbor, says that in such situations, the person who isn't in pain is likely to respond in kind, especially if he or she suspects that the other person is exaggerating or even fabricating the pain.

Health.com: How we live with pain

"If one partner doesn't believe in the diagnosis, they are more prone to respond in an angry fashion as opposed to be more supportive," he says.

This cycle of resentment, aversion, and unmet expectations can infect every aspect of a relationship. If spouses in pain consistently feel that they deserve more special care and attention than they are receiving, says Cano, "this mismatch of attitudes can certainly cause problems in couples and can spill over into other areas of disagreement, like financial decisions and decisions about how to spend leisure time."

The potential for pain-related discord to spread into the rest of the relationship has been well documented, according to Geisser. "It has been shown that relationships in which one partner has chronic pain tend to be more strained, have more marital distress, more conflict, and a greater likelihood for divorce," he says.

How to halt the cycle

If you sense that chronic pain is tearing your relationship apart, it's important to act before things get out of hand.

The first step is education, Cano suggests. "Consider treatment as a joint effort," she says. "Both partners should try to learn as much as they can about the pain condition and should attend doctors' appointments together to learn about options for treatment."

It's helpful for both partners to hear a professional opinion on how much exercise and movement is healthy for the person with pain, for instance, and to what extent the partner in pain should help with housework and physical tasks. (Moderate physical activity can actually lessen the pain associated with some conditions, such as fibromyalgia and arthritis.)

Couples therapy is another option. "It allows couples to talk openly and without defensiveness about how the pain has changed their lives," Cano says.

In Cano's new study, the spouse who was in pain sometimes simply wanted emotional support. "They weren't necessarily looking for the spouse to do more chores, they just wanted their emotional distress to be accepted by their partner and they wanted to feel like their partners understood and listened to them," she says.

Even in these cases, the study suggests, it's better to be clear about your needs -- for example, "I just need to talk, honey" -- rather than sighing or moaning.

Communication between partners is essential to prevent pain from interfering in a relationship, says Dr. Mildred Farmer, an internist and fibromyalgia specialist at Meridien Research, in St. Petersburg, Florida. And it goes both ways: People who are in pain also need to listen to their partners and make an effort to understand how they're feeling, Farmer says.

Health.com: 5 ways to save your relationship from holiday hell

"Keep lines of communication open with your partner and understand that both partners may have issues with fairness," she says. "While it doesn't seem fair to have to struggle with pain, watching a loved one struggle with pain is another kind of burden."

Communication doesn't just mean speaking, Farmer says. People in pain should realize that they might be signaling anger or distress "even when [they] think [they] are doing a good job hiding the pain," she says. "Be aware that you can manifest pain purposefully by talking about your pain, or manifest pain indirectly through facial expression, or body language."

After some fraught years, the Champneys' relationship is back on solid ground as a result of effective treatment for Athena's fibromyalgia, some basic education about the condition, better communication, and a healthy -- though unforeseen -- dose of empathy.

In 2007, Adam Champneys developed an excruciating kidney stone, which, he says, helped him understand and empathize with his wife's pain.