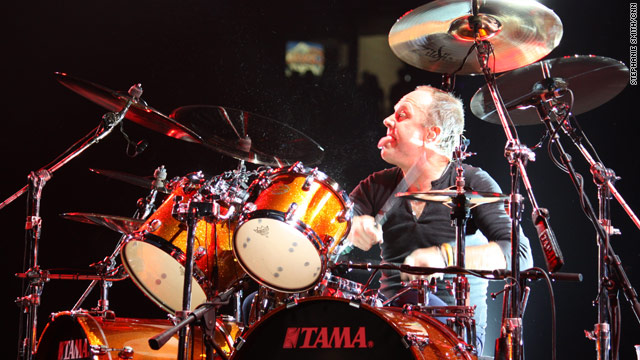 Metallica's Lars Ulrich, 46, uses earplugs to protect himself after developing tinnitus, a perception of sound where there is none.
STORY HIGHLIGHTS

Lars Ulrich holds a drumstick high above his head. For a split second, the frenzy quiets to a dull roar. Ulrich brings his drumstick down with a crash and is swallowed by astonishing noise -- wailing guitars, thumping bass and his own furious banging on the drums.

"I've been playing loud rock music for the better part of 35 years," said Ulrich, 46, drummer for the heavy metal band Metallica. "I never used to play with any kind of protection."

Early in his career, without protection for his ears, the loud noise began to follow Ulrich off-stage.

"It's this constant ringing in the ears," Ulrich said. "It never sort of goes away. It never just stops."

Except the ringing is not spurred by actual sound. It is a condition called tinnitus, a perception of sound where there is none.

"It's a phantom auditory sensation like phantom limb pain when an arm is cut off, and you feel pain in that missing limb," said Richard Salvi, a leading tinnitus expert and director of the Center For Hearing and Wellness at the University at Buffalo in New York. "Much the same seems to happen when you have tinnitus."

Tinnitus can be persistent or intermittent. It often is perceived as a high-pitched ringing in the ears but also can sound like buzzing, whistling, whooshing or clicking.

More than 50 million people in the U.S. experience some degree of tinnitus, according to the American Tinnitus Association. For 12 million of those afflicted, the noise is disabling.

At first, Ulrich said the ringing in his ears was barely perceptible. He said the problem got worse during a 1988 concert tour, oddly while he slept.

Video: Are you abusing your ears?
I try to point out to younger kids ... once your hearing is gone, it's gone, and there's no real remedy.
--Lars Ulrich, Metallica drummer
RELATED TOPICS

Theories abound, but scientists do not know precisely what causes tinnitus. There is a common thread: loud noise.

"The most reported known cause is noise exposure, excessive noise levels," said Norma Mraz, a doctor of audiology in Atlanta, Georgia. "That can be from machinery, lawn equipment, children's toys, iPods. Things that people are exposing themselves to repeatedly and not taking the proper precautions to protect their hearing."

Mraz said tinnitus may begin with damage to hair cells in the cochlea, a structure in the ear that turns outside sounds into nerve impulses that are sent to the brain.

"It's like walking through the grass," Mraz said. "As you walk initially it lies down, but it bounces back up. If you keep [walking] that same path over and over again, those hair cells, or the grass, will stay down. Then you begin to rip the blades of grass out, and now you've hit dirt. The same thing happens with hair cells. We don't regenerate hair cells."

As hair cells deteriorate the brain may be compensating, generating the perception of "ringing" or "buzzing" in the ear.

Salvi said the easiest way to understand how the brain may do this is to imagine listening to an AM radio station while driving several miles out of town. Eventually, the radio signal begins to fade.

"I reach down to my radio and turn up the volume control. I hear a signal but also noise and static," Salvi said. "With tinnitus, the ear is damaged; it's no longer picking up a signal and sending it to the brain, so the brain basically turns up the volume. You start hearing static electrical activity in the brain that normally is dampened down or suppressed."

Exposure to loud noise is only one of several possible triggers for tinnitus. According to the American Tinnitus Association, head and neck trauma, certain tumors, wax buildup and medications such as aspirin and certain antibiotics may also be to blame. Hearing loss that is typical with advancing age also could lead to tinnitus.

While Ulrich experienced sustained loud noise in big doses, a single, jarring noise can trigger many cases of tinnitus such as those heard on construction sites or during gun blasts and roadside bombings suffered by war veterans. A recent study by the Department of Veterans Affairs' Office of Policy and Planning rated tinnitus as one of most common disabilities among returning war veterans.

"The military is generating a tremendous number of tinnitus patients," Salvi said.

Treatments to manage tinnitus include sound therapy and counseling sessions that help patients to understand, even ignore, the ringing in their ears. Salvi said that merely convincing some patients that they don't have a brain tumor can alleviate anxiety about tinnitus, which may mitigate some of the noise.

As he began suffering with hearing loss and tinnitus early in his career, Ulrich protected himself with earplugs while performing. While his condition still nags him, he said the tinnitus could have been worse, and over the years he's learned to tolerate it.

Ulrich said he is concerned about young people, the so-called iPod generation, who listen to loud music, and may not be as vigilant about protecting their ears.

"If you get a scratch on your nose, in a week that'll be gone," Ulrich said. "When you scratch your hearing or damage your hearing, it doesn't come back. I try to point out to younger kids ... once your hearing is gone, it's gone, and there's no real remedy."