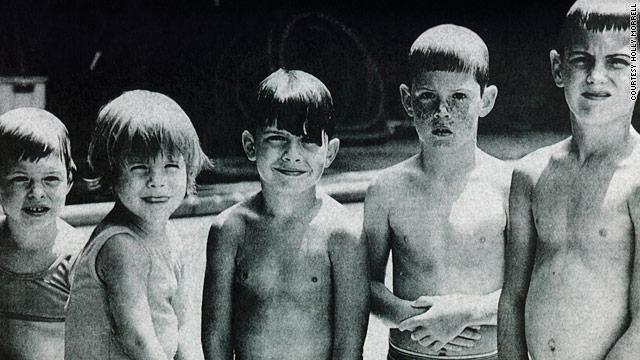 From left: Cousins Desiree, Holly, Eric, Kyle and Mitchell Morrell, four of whom were stricken with hypertrophic cardiomyopathy.
STORY HIGHLIGHTS

(CNN) -- Growing up in Southern California, Holly Morrell and her brother, Eric, had no closer friends than their cousins Kyle, Mitchell and Desiree. Holly's father, Chuck, and his twin brother, Gary, were the famous "Touchdown Twins," stars at Downey High School in Modesto and then Washington State University. After a brief stint in pro football, Chuck became an actor and film producer. Gary was a sports broadcaster.

But a dark shadow was creeping toward the youngsters' sun-drenched lives. There had been hints. Their fathers' sister had died of an unknown cause at age 3. Their grandmother died of heart disease at age 54.

But those shocks were nothing like the one they got in 1975, when Kyle, just 12, collapsed in sudden cardiac arrest. He lingered in a coma for two months and then died.

Shaken, everyone in both families was screened for heart problems; Desiree and Mitchell were found to have hypertrophic cardiomyopathy, or HCM, a genetically carried condition that leads to thickening and weakening of the heart muscle.

The following year, Holly Morrell recalls, 14-year-old Mitchell asked, "Mom, am I gonna die?" His mother reassured him that medication was keeping him safe. "He died the next day," Morrell says.

A year later, it was Desiree's turn to suffer cardiac arrest. This time, a bystander performed cardiopulmonary resuscitation, and she survived.

The string of tragedies left the two families devastated. It also left Morrell with a sense of mission: to warn people who might be at risk.

Morrell runs Heartfelt Cardiac Projects, a nonprofit organization that provides screening for young people at little or no cost. The screening includes an electrocardiogram to check the heart's electrical rhythm and an echocardiogram to examine the shape of the heart muscle.

Morrell said, "Heart disease is the number one killer, and in the United States as a whole we should have early detection for heart disease. My program began with a focus on high school and collegiate athletes, but now I'm doing it for ages 5 and up."

Sudden cardiac arrest kills nearly 300,000 people a year, according to the American Heart Association. Of men who reach age 40, it kills one in eight.

Although many have underlying coronary disease, most victims -- like Kyle and Mitchell Morrell -- are unaware, according to Dr. Michael Lloyd, a heart rhythm specialist at Emory University in Atlanta, Georgia. "Their first manifestation is dropping dead."

Although many high schools and colleges have instituted heart screening for student-athletes, the heart association issued a statement in 2007 that said the cost of testing and the relatively low prevalence of life-threatening conditions make universal screening for athletes "neither prudent or practical."

But there has been a push to do more. At the group's recent scientific meeting in Orlando, Florida, a group of cardiologists from Houston, Texas, argued that screening with a standard EKG could be a cost-effective way to identify students at greater risk who would benefit from a more thorough workup.

As technology advances, the debate over who might benefit from screening has expanded to the realm of adult patients.

Cambridge Heart, a company based outside Boston, Massachusetts, promotes a test called the Microvolt T-Wave Alternans. It's a version of a stress test that detects minute changes in electrical voltage between each heartbeat, variations that are undetectable on a standard EKG. It typically costs a few hundred dollars, although the cost for many patients with heart disease is covered by insurance.

Traditionally, the test is used to rule out high risk for people with known heart trouble who are considering whether to implant a defibrillator. But representatives from Cambridge Heart say there is evidence that the test might be used as a screening device to spot problems in the first place.

They point to stories of people like Federico Limon, a 57-year-old manager for UPS in Miami, Florida. Last year, a routine physical turned up a mild abnormality on an EKG. Limon, an avid tennis player who had recently lost 60 pounds, considered himself in good health and shrugged it off. But his brother worked in the office of Dr. George Ponce, a cardiologist in Moreno Valley, California, and urged him to reconsider. So it was that in December, Limon repeated the stress test in Ponce's office, along with a Microvolt T-Wave Alternans screening.

This time, the results were unequivocal: His heart rhythm was out of sync, and the Microvolt T-Wave Alternans was abnormal, too. A followup test, using radioactive dye to test circulation, found that three of Limon's coronary arteries were almost completely blocked.

As he recalls, "Dr. Ponce said, 'I don't want to scare you, but it looks like you're going to have a massive heart attack.' " A day later, he underwent triple bypass surgery.

Ponce says Limon was lucky that his brother lobbied for such a thorough screening.

"He didn't fall into the realm of people who would typically get MTWA," Ponce said. "Mr. Limon had normal heart function. It's just out of courtesy that we went the nine yards."

What is unclear is just how many patients the method can detect whose risk would otherwise go unnoticed. Some studies find that Microvolt T-Wave Alternans does no better than conventional tests in predicting cardiac arrest among patients in a very high-risk group: those with implanted defibrillators. But a study from Japan last month said that among lower risk-patients, those with abnormal test results were 4.4 times more likely to suffer a subsequent arrest or life-threatening arrhythmia.

Lloyd says that screening the general population would not find enough people in danger to justify the cost.

"I'd focus on people who are at known risk," he said. "If you were a billionaire prince and you say, 'I have no symptoms, but I want to know how my heart is doing, to the hilt,' then you do all these things. But [for most people], that's not feasible."

People may have no choice, but it's hard to live with uncertainty, something Holly Morrell understands as well as anyone.

After years of ambiguous test results, a new genetic screening method revealed in 2002 that she, like her cousins, suffers from hypertrophic cardiomyopathy. Within months of getting the news, she had a defibrillator implanted in her chest. Three years later, it went off on the tennis court, a terrifying jolt that she knows saved her life.

"I feel incredibly blessed. I'm luckier than most," she said. But she admits that sadness plays a role in her work with Heartfelt Cardiac Projects. "I'm doing this so for other families, the story can be a happy one."