What really killed the beauty queen? 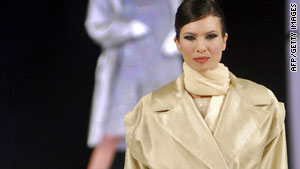 (CNN) -- When Argentine beauty queen Solange Magnano approached Dr. Guillermo Blugerman in 2004 about helping her achieve a flatter stomach, the plastic surgeon says, he obliged with liposuction. But when she returned five years later requesting silicone injections for a higher, firmer rear end, he turned her away.

"I said this was not allowed to be done in Argentina," Blugerman said on the telephone from his Buenos Aires office.

Blugerman, the president of the Argentina Association of Medicine and Cosmetic Surgery said he believes Magnano then went in search of someone who would give her the injections she wanted.

"She found someone else to do this with this forbidden material," he said.

The former Miss Argentina died November 29, reportedly of a pulmonary embolism, a blood clot that blocks blood supply to the lungs. Embolisms are known complications of silicone injections though they can occur -- rarely -- after any surgery. It's still not clear Miss Argentina was given a silicone injection, which is not an approved procedure for "butt lifts" in Argentina or the United States.

If silicone injections caused Magnano's death, the lesson learned is an obvious one -- seek out unapproved medical procedures at your own peril -- but there are many other, more subtle tips for staying safe during plastic surgery.

Some people think of cosmetic surgery as not real surgery... It's still surgery. You get cut. You bleed.
--Dr. Angelo Cuzalina
RELATED TOPICS

The first rule is not to take plastic surgery lightly.

"Some people think of cosmetic surgery as not real surgery. They get the impression they're going to a spa," said Dr. Angelo Cuzalina, president-elect of the American Academy of Cosmetic Surgery. "It's still surgery. You get cut. You bleed."

While complications of plastic surgery are rare, they do happen. For example, for every 100,000 liposuction procedures in the United States, there are between three and 100 deaths, according to the Food and Drug Administration.

The second rule is to be your own investigator.

"It's my impression from being a surgeon that people don't ask enough questions," said Dr. Phil Haeck, president-elect of the American Society of Plastic Surgeons.

When her 18-year-old daughter, Amy, wanted liposuction in her chin and stomach, she said the surgeon told them that Amy was "zero risk."

"I asked him if there was anything we needed to worry about, like blood clots to the brain, or anything like that, and he said absolutely not," Fledderman said.

The procedure was performed in 2001 in the King of Prussia, Pennsylvania, office of Dr. Richard Glunk. Later that day, Amy was transferred to the hospital, where she died two days later. Her autopsy listed complications of a fat embolism due to liposuction as the cause of death. Her parents filed a wrongful death lawsuit and won $20.5 million in damages against Glunk and a nurse anesthetist involved in the surgery. The case is on appeal to the Superior Court of Pennsylvania, where it's scheduled to be argued in January.

Glunk said he never told Amy that she was "zero risk" and that Amy was aware of the risks inherent in surgery, including the possibility of death. He said a fat embolism like the one that led to Amy's death is "a tragic, unpredictable, unpreventable event that has no treatment" other than supportive care.

"The informed consent was at all times with Amy. It was her understanding," Glunk said. "The instant that Amy had any problems, 911 was called."

Glunk said there's no doubt in his mind that the verdict against him will be reversed on appeal.

"Even though everything is going to get reversed in the courts, and it will technically be proclaimed that I did nothing wrong, I've had 8½ years of damage that will never be undone," he said. "Any time anyone has a severe complication with surgery it's a horrible tragedy, but the existence of a complication does not mean that a doctor did anything wrong."

While plastic surgery will never be risk-free, asking these five questions can help decrease the chances of a deadly complication.

1. "Doctor, are you board certified?"

2. "Doctor, is your office accredited for performing this procedure?"

Most cosmetic procedures are not done in hospitals, but rather in outpatient clinics, according to Cuzalina of the American Academy of Cosmetic Surgery.

He recommends going to a clinic that's been accredited by a group such as the Joint Commission or the Accreditation Association for Ambulatory Health Care. These groups inspect facilities and make sure they're set up to safely perform surgical procedures.

"You're better off going to someone who cared enough to get the proper accreditation," Cuzalina said.

One of the more common complications of plastic surgery is a DVT, where a blood clot forms in a deep vein, usually in the leg. The clot can then break loose and travel to the lungs, causing a pulmonary embolism.

Haeck of the American Society of Plastic Surgeons said doctors should have a plan to prevent DVTs, which may include wearing special stockings during surgery, walking as soon possible after surgery, and looking out for early warning signs of complications, such as leg pain or shortness of breath.

4. Doctor, do you have privileges at a hospital to perform this procedure?

Even though you likely won't be in the hospital, you want to know if a hospital has deemed your doctor skilled enough to perform the procedure in their facility.

"The hospital is the judge of the physician's abilities," Haeck said. "If a surgeon says he doesn't have privileges at a local hospital to do the procedure, that should be a red flag."

If the surgeon says he does have privileges, call the hospital and double-check.

5. Doctor, how many of these procedures have you done?

"Good surgeons expect you to research them and won't be afraid to answer personal or tough questions," Haeck said.

When you find out how many times a doctor has performed a procedure, go to other plastic surgeons and compare.

In addition to asking these five questions, here are two more tips. Beware of trying to do too much at once. Lumping together several procedures can increase the chances you're going to have a problem.

Also, make sure you talk to your doctor about whether you need to go off certain medications before surgery. For example, birth control pills and estrogen supplements increase your chance of getting a blood clot, and doctors often recommend stopping them several weeks before surgery.

Doctors also sometimes want patients to stop taking herbs such as ginkgo and concentrated garlic, which can lead to excessive bleeding.

CNN's John Bonifield and Sabriya Rice contributed to this report.