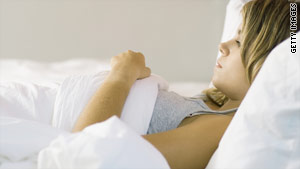 Expert: "It looks like a lot of what gives people relief is that they're feeling whatever the opposite of neuroticism is."
STORY HIGHLIGHTS

(Health.com) -- People who take antidepressants such as Paxil often say they feel less stressed and more outgoing, lively, and confident. Now a new study suggests it's not just because they're less depressed.

In fact, such drugs may alter two key personality traits linked to depression -- neuroticism and extraversion -- independently of their effect on depression symptoms.

"Medication can definitely change people's personalities, and change them quite substantially," says the lead author of the study, Tony Z. Tang, Ph.D., a professor of psychology at Northwestern University in Evanston, Illinois. The findings show that "those changes are very important," he says.

And the more drastic the personality shift, the less likely depressed patients were to relapse, according to the study, published this week in the Archives of General Psychiatry.

Health.com: How to cope with mental illness during the holidays

Paxil is rarely prescribed now, because of concerns about side effects and withdrawal, says Tang, but other SSRIs (such as Prozac and Zoloft) are likely to have the same effect on personality.

The notion that antidepressant drugs -- and SSRIs in particular -- can cause personality changes is not new. But many researchers have attributed these changes to a patient's improved mood, and have been skeptical that SSRIs had independent effects on personality.

The current research is a "confirmation of what I observed a number of years ago," says psychiatrist Peter D. Kramer, M.D., the author of the landmark 1993 book "Listening to Prozac," which described how patients treated with antidepressants often became more at ease socially and less sensitive to rejection.

"It looks like a lot of what gives people relief is that they're feeling whatever the opposite of neuroticism is," says Kramer, a clinical professor of psychology and human behavior at Brown University in Providence, Rhode Island. "Getting better very solidly seems to predict a longer period before the next episode. That argues against the notion that these medications are just band-aids [that] get people through."

In Listening to Prozac, Kramer expressed concern that SSRIs might usher in an era of "cosmetic psychopharmacology," with non-depressed people popping pills to make themselves more attractive, energetic, and confident. But this hasn't come to pass, he says. "I've never had anyone come into my office or ever had an extended phone conversation with someone who was on these medications for trivial reasons."

Health.com: How the right drugs can treat bipolar disorder

Although the new study sheds some light on the relationship between SSRIs and personality, there is much that remains unknown about these drugs.

"The theory of how these medications work is actually still a mystery," says Tang.

In the study, the researchers randomly assigned 240 people with moderate to severe depression to Paxil, placebo, or cognitive therapy (a form of talk therapy). In order to separate out the effect of Paxil and depressive symptoms on personality, the researchers matched participants in the Paxil and placebo groups according to how much their symptoms improved.

Health.com: Why fibromyalgia has a credibility problem

After eight weeks, the group of patients who took Paxil reported a reduction in neuroticism nearly seven times greater than that reported by the patients taking placebo whose depression symptoms had improved a comparable amount. The increase in extraversion reported by the Paxil group was 3.5 times greater than that among the matched placebo patients. (The changes in personality were measured using a standard questionnaire.)

The study was funded by the National Institute of Mental Health. GlaxoSmithKline, the maker of Paxil, provided the medication and placebo pills.