WHO: Women's health an 'urgent priority' 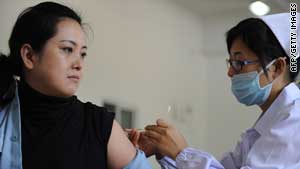 The World Health Organization has called for an improvement in health care for women around the world.
STORY HIGHLIGHTS
RELATED TOPICS

(CNN) -- Societies fail women at key moments in their lives by not offering them quality health care, which undermines their ability to reach their full potential, the World Health Organization says in a new report.

The report declares that women's health is an "urgent priority" and says that women are shortchanged on medical care especially in adolescence and, then again, later in life.

"If women are denied a chance to develop their full human potential, including their potential to lead healthier and at least somewhat happier lives, is society as a whole really healthy?" asked Dr. Margaret Chan, director-general of WHO. "What does this say about the state of social progress in the 21st century?"

"In richer countries, death rates for children and young women are very low, and most deaths occur after 60 years of age," the report says. "In poorer countries, the picture is quite different: The population is on average younger, death rates among children are higher, and most female deaths occur among girls, adolescents and younger adult women."

Perhaps the most striking difference can be found in maternal mortality. Some 99 percent of the 500,000 annual deaths during childbirth happen in developing nations.

We will not see progress when women are regarded as second-class citizens in many parts of the world.
--Dr. Margaret Chan, director-general of WHO

Much of the report focuses on sexual and reproductive health, which it says are vital to women's well-being, but it also says "harmful behaviors in relation to sex, tobacco and alcohol use, diet and physical activity" during adolescence can haunt women later in life.

"Establishing healthy habits at younger ages can help women to live active and healthy lives until well into old age," the report says.

Studies show on that women live six to eight years on average longer than men, but the report says those years aren't necessarily healthy. Women often have greater difficulty obtaining quality health care because of what it calls gender-based inequalities in education, income and employment.

"We will not see significant progress as long as women are regarded as second-class citizens in so many parts of the world," Chan said. "In so many societies, men exercise political, social and economic control. ... These unequal power relations translate into unequal access to health care and unequal control over health resources."

In making women's health a priority, the World Health Organization says it is trying to improve health care for women and girls around the world, as well as strengthen health systems everywhere.

"Improving women's health matters to women, to their families, communities and societies at large," the report concludes. "Improve women's health, improve the world."