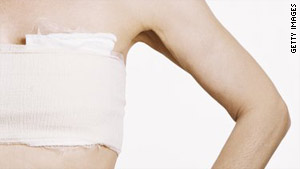 There are several reasons that survivors experience pain: nerve damage or injury from surgery or radiation.
STORY HIGHLIGHTS

(Health.com) -- Almost half of women who have breast cancer surgery still have pain or numbness two to three years later, according to a new study. Women younger than 40 who receive lumpectomies are at the greatest risk.

In general, women are most likely to have pain or a loss of sensation in the breast region, followed by the armpit, the arm, and their sides. However, 40 percent of women with lingering symptoms have pain in parts of the body not affected by treatment, according to a report in the Journal of the American Medical Association.

"This is a very well-done study by very well-respected surgeons in Denmark," says Dr. Allen Burton, a professor and the chair of the department of pain medicine in the division of anesthesiology and critical care at M.D. Anderson Cancer Center, in Houston, Texas.

"This is a known phenomenon," says Burton, who wasn't involved in the study. "These women have pain and huge numb patches in their chest, underarm, down their arm, and in their back that never feels normal again."

None of the women in the study had reconstructive breast surgery, which is commonplace in the United States. "It would be interesting to see if that changes the outcome," Burton says. "Would they have more pain? Less pain? Different kinds of pain?"

These women have pain and huge numb patches in their chest, underarm, down their arm, and in their back that never feels normal again.
--Dr. Allen Burton

In the study of 3,754 breast cancer survivors ages 18 to 70, 47 percent had pain in one or more area, and 58 percent reported problems in the treated breast, including burning and a loss of sensation for one to three years after their surgery. Overall, 13 percent of women with lingering problems said their pain was severe, 39 percent said it was moderate, and 48 percent reported light pain. And 76 percent of patients with severe pain said they ached every day.

Women at the greatest risk for chronic pain were ages 18 to 39 and had undergone breast-conserving surgery, or lumpectomy, in which doctors remove only the tumor and some surrounding tissue. Other risk factors for persistent pain included radiation therapy, which is directed at the breast area to destroy any remaining cancer cells after surgery.

There are several reasons that breast cancer survivors experience pain such as nerve damage or injury from the surgery or radiation, but in the future, nerve-sparing surgery may help take the sting out of this persistent pain, according to study authors led by Dr. Rune Gärtner, of the University of Copenhagen in Denmark.

Health.com: 3 things to keep in mind if you're considering a lumpectomy

The first priority is to always treat the breast cancer as effectively and aggressively as possible, Burton says. That said, a paravertebral block, which is an injection of local anesthetic into nerves of the spine to block the pain, may also help cut the risk of postsurgical breast cancer pain.

"We are studying it and trying to determine whether or not it impacts the prevalence of long-term chronic pain after breast cancer surgery," he says. "We think it does because it makes sense that the better you control acute pain around the surgery, the less likely you are to get chronic pain syndrome later."

Health.com: Why lymph nodes are a magnet for breast cancer

"Pain decreases quality of life and should be a cause to reach back out to the surgeon or radiologist and ask for a referral to a physical therapist for intervention," says Kneece, who is also the author of "Your Breast Cancer Treatment Handbook." "Most pain can be addressed and reduced or eliminated."

Physical therapists can help women develop a plan to reduce or eliminate pain. In general, range-of-motion exercises after surgery can help reduce the risk of pain, according to Kneece. "If not performed, there will be a fibrous tissue which forms in the area restricting motion and causing pain when the arm is stretched," she says.

Health: How one woman with breast cancer is (still) handling a difficult recovery

One potential cause of pain is lymphedema, a swelling of the arm and hands. Lymphedema can occur after breast surgeons remove lymph nodes from a woman's underarm region to test them for cancer.

Some women are candidates for sentinel node mapping, a technique that reduces the risk of lymphedema; dye is injected to see which lymph node is closest to the breast tissue (and therefore most likely to contain cancer cells.) If this node is cancer free, doctors don't have to remove multiple lymph nodes, which reduces the risk of pain and swelling.

Health.com: What is a sentinel node biopsy?

"If one notices increasing swelling accumulating in the affected limbs or trunk, it is likely an early warning sign of lymphedema and she should be evaluated by a fully certified lymphatic drainage therapist," says occupational therapist Cathy Kleinman-Barnett, a lymphedema specialist at Northwest Medical Center, in Margate, Florida.

"The additional fluid buildup can cause abnormal sensations such as tingling, aching, [and] heaviness, and should diminish or stop with range-of-motion exercises, stretching, and massage to stimulate lymphatic flow," she says. "There is help available, and women should not have to live in pain."