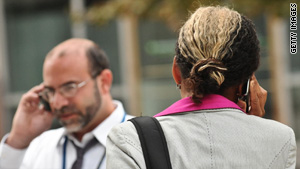 The longer you speak on the phone, the more risk you may have of getting tumors, some doctors say.
STORY HIGHLIGHTS
RELATED TOPICS

(CNN) -- In the year since a U.S. cancer researcher's warning drew wide attention, more evidence is emerging that long-term cell phone use is associated with cancer, but there's still not a definitive explanation or proof of cause and effect.

Last summer, Dr. Ronald Herberman, then director of the University of Pittsburgh Cancer Institute, issued a warning to about 3,000 faculty and staff, listing steps to avoid harmful electromagnetic radiation from cell phones. This included keeping the phone away from the body as much as possible and not allowing children to use cell phones except in emergencies.

"Since I put out that precautionary advisory in July of last year, I believe there is more indication for concern, particularly among children," he recently said.

A much-anticipated but unreleased report from the World Health Organization on a decade-long investigation called Interphone will show a "significantly increased risk" of some brain tumors "related to use of mobile phones for a period of 10 years or more," the London Daily Telegraph reported in late October. The study will be published before the end of the year, the newspaper said.

Supporting that conclusion, a recent study in the Journal of Clinical Oncology that looked at 23 case-control studies found that the research with the more scientifically rigorous methodologies suggested cell phones and tumors are linked. The eight strongest studies made sure the investigators did not know which participants had tumors when they conducted the interviews about cell phone use, and they did not receive funding from industry groups.

Studies that looked at people who had used cell phones 10 years or longer tended to find the strongest risk of tumors. Researchers found that cell phone users had a 10 percent to 30 percent higher risk than people who barely, if ever, used this technology.

A telling feature of the findings in the stronger studies was that the side of the head against which people held their cell phones was highly correlated with the location of tumors, said Joel Moskowitz, director of the Center for Family and Community Health at the University of California, Berkeley.

Skeptics criticize this as "recall bias." People may be more likely to think about using a cell phone on the same side of the head as the tumor because they're asked about it in that context.

Moskowitz said he was surprised to see that a subgroup of studies found this increased risk of tumors.

The poorer-quality studies actually found that cell phones had a protective quality -- that the phones helped stave off tumors -- but could not offer an explanation for why, he said. Many of these weaker studies were also funded by telecommunications industry groups, he said.

Interphone, for example, receives some funding from the GSM Association, which represents the worldwide mobile communications industry, and the Mobile Manufacturers Forum, an international association of telecommunications equipment manufacturers.

Research that has been released by Interphone has major flaws, Moskowitz said. Some shortcomings include poor participation in the control group and a definition of "regular cell phone use" that included people who use their phones once a week for six months.

But the scope of the project is significant: Nearly 13,000 people were questioned between 2000 and 2004 in 13 countries about their cellular phone use, looking for a link to brain cancers and salivary gland tumors.

A major problem with the existing research on the possible link between cell phones and cancer is that the studies are retrospective. That means researchers compare the cell phone use of people who have cancer against that of people who don't have the condition. People who have tumors may be more inclined to exaggerate or misremember information about their cell phone usage.

A stronger approach would be to follow young people who are just starting out with cell phones for a generation, asking them about their cell phone use over time and seeing what portion gets cancer, said Dr. William Curry, neurosurgeon at Massachusetts General Hospital.

Moreover, seven of the eight "strongest" studies in Moskowitz's group's analysis came from the same researcher: oncologist Dr. Lennart Hardell in Sweden. Critics say there could be other factors that make Sweden different in terms of cancer susceptibility and cell phone use. The causal link has not been proved.

Although the study is a thorough meta-analysis, it's not the final word on the issue, Curry said.

"I don't think this study would change how I counsel my patients," he said. "There's not enough data to say that you should be worried."

Oncologists who are skeptical of the cancer connection argue that no one can explain the mechanism by which cell phones would induce tumors.

But Moskowitz counters that the tobacco industry used this reasoning for many years as evidence built that cigarettes had a link to lung cancer.

Moskowitz recommends getting a corded headset and keeping the phone away from your body. Even holding the phone a few inches from your ear makes a big difference in terms of exposure, he said.

Bluetooth devices, which produce much less energy than cell phones, may still be problematic if people keep them on next to their heads all day, as the length of exposure is also relevant, he said.

Moskowitz called for cancer organizations and government agencies to assess ways to reduce potential harms from cell phones. One expert has even suggested issuing cell phones that cannot be used without a corded headset, Moskowitz said.

Another positive measure to take is to get a cell phone with a low specific absorption rate, or SAR, which has to do with how much radio frequency energy gets absorbed by your body. Look up your phone on this list of the SAR levels from CNET.

"There may be some easy, fairly inexpensive ways to change the way people use them," he said.