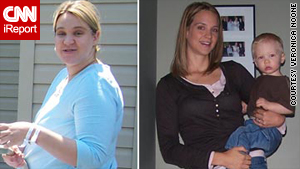 At left, Veronica Noone, after her son was born in June 2005; and about 15 months later. She says she maintains her weight by trying not to be "perfect" in her diet.
STORY HIGHLIGHTS
RELATED TOPICS

(CNN) -- Veronica Noone had been a little overweight since her teens, and, like many people, had spent the better part of her life trying different diets, whatever was popular at the time.

Having a child changed that, she says. After she had her baby, she decided to lose the post-baby weight and the extra pounds she'd been carrying years before that. Dropping about 70 pounds in seven months, Noone's maintained a healthy weight for almost four years now.

Name: Veronica Noone, 33, an online interactive designer at University of Maryland-Baltimore County who lives in Perry Hall, Maryland.

Background: She was a very normal child but her weight struggles began after puberty. She was probably 10 to 20 pounds over the weight she thinks fits well on her 5-foot-9 frame. It struck her hard because in her group of friends, she was one of the chubby ones. She started to yo-yo diet to try to fit in.

After college she gained more weight, topping 200 pounds. She became what she calls a "serial dieter." When she and her husband decided they wanted to have a child, it was a decision that changed her outlook on life and her self image.

How she lost it: After her son was born in 2005, Noone started to eat in a different way. "I found that when my focus changed from trying to get thin to trying to be healthy and a good example [for my son], all of a sudden the weight started coming off," she says. Her preoccupation with her body image disappeared and she became more concerned with what were the best food choices she could make for her son.

But just as important, she came to another realization. "I didn't have to be perfect," she says about her plan to lose weight. Before, she would hammer herself if she broke with the diet and had a doughnut or something else that made her feel like she had failed. "Every choice I make is an on-plan choice. If I choose to eat a doughnut, that's fine. I'm going to eat that doughnut. It doesn't mean I'm off my diet. I'll account for that in a later meal. Or I'll have a lighter dinner."

How she's keeping it off: She's maintained her weight for about four years. She credits her Twitter account, where she enters what she eats like it's a food journal. "It makes me stay conscious of what I am eating," she says. She did keep up with her Weight Watchers points for two years, but felt a little restricted by tracking them.

She always cooks dinner for her family and the leftovers become lunch for the next day. She also says she likes to bring snacks to work like soup, yogurt, apples and pudding cups.

Advice to others: If you just had a baby, don't put any pressure on yourself to lose the weight, Noone says. Instead, make a decision to eat healthier the moment you get home from the hospital. The goal should be to be conscious of what you eat and to not take the easy way out because you are frazzled or short on time. "A lot of women don't think about themselves at that time; it's all about the new baby and it needs to be," she says. "But if Mom's not feeling good and taking care of herself, then the child is not going to be happy either."

Noone believes the outside motivation of having a child made it easier for her to lose weight because she was also being healthful for her son. She also incorporated her son into her activities. One of the fun things she liked to do was to dance around the house with her child, getting down to everything from kid's music to rock 'n' roll to alternative music to hip-hop. "The little guy," as she calls him, is going through a Linkin Park phase, she says.

She also blogs on a Web site called greenlitebites.com where she shares recipes she and "the little guy" like to create.