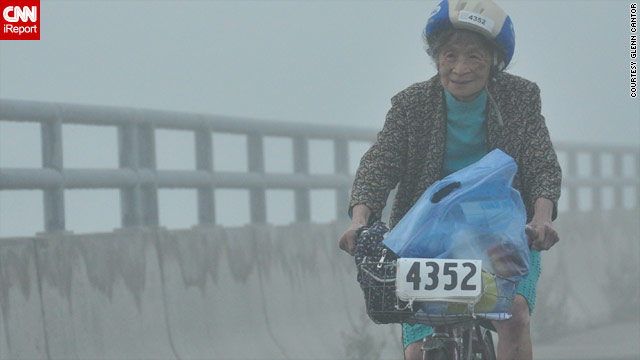 For the past 26 years, 84-year-old Lan Yin "Eiko" Tsai has worn a dress and high heels to bike 150 miles for MS research.
STORY HIGHLIGHTS

(CNN) -- Amidst the sea of jerseys and bike shorts at New Jersey's City to Shore -- a 150-mile bike ride to benefit multiple sclerosis research -- one unlikely rider stands out.

A tiny 84-year-old woman wears a neat, green turtleneck dress and an embroidered jacket. On her feet is a pair of high-heeled pumps. Her salt-and-pepper hair peeks out from the helmet that indicates she is, in fact, a participant in the bike ride. Her old-fashioned one-speed bicycle is purple, with a large wire basket on the front that carries her belongings and her number for the ride.

Lan Yin Tsai doesn't give the impression that she could go five miles on that bike, let alone 150. But that's what she's done -- for the past 26 years. Eiko, as she's known to friends and family, is an institution at the annual City to Shore event. And over the years, she has become a symbol of hope and determination for City to Shore participants and MS patients.

Her unwavering determination makes her an unusual person in the days of this recession. According to the National Conference on Citizenship, 72 percent of Americans said they were spending less time volunteering since the economy hit rock bottom a year ago. It's a double blow to nonprofits, which are relying increasingly on volunteers as their revenues sink. But Tsai is persisting with the service she's done for 26 years.

"I always try to tell people, whatever you can do, keep doing it, keep doing it," she says. "And that's why I do MS. When I start something, I don't want to just quit."

It all started when Tsai began to work in a hospital many years ago. A native of Taiwan, she was trained in Japan in the art of shiatsu massage. So while working at the hospital, "I started to put my hands where they hurt," she says. Tsai began regularly giving massages to cancer patients, until one day, about 26 years ago, she massaged a patient with MS. It was then and there that she first heard about the bike ride and decided to participate.

"In Taiwan, riding a bike is very common," explains Tsai's grandson, Alan Sim, who also participates in City to Shore -- 2009 was his sixth year. "So she grabbed her little one-speed bike and was doing the ride."

And why the nice dress and high heels? Tsai says that's just her normal biking outfit.

Tsai is well-known in the local chapter of the National MS Society and among MS patients.

"She's like the superstar of the ride," says Jeff Pickens, a volunteer at this year's event and a CNN iReporter. "When she shows up, the whole place applauds."

See Pickens' photos of Tsai and other riders

"When the last rider comes in, [the MS society] usually has like a police car or fire truck with sirens going off. And usually my grandmother is the last person," says Sim with a laugh. "So the people who know about her, they just sit around waiting for multiple hours after most people have finished. And she'll just ride in, and people are cheering, taking pictures, asking for autographs. It's like being with a celebrity."

"I have the most pressure out of anyone on the tour," Sim adds jokingly. "I know I can't quit, because my grandmother's behind me somewhere!"

Tsai's determination runs beyond her annual participation in the bike ride. She's still practicing shiatsu, running her own massage business out of her basement. It keeps her busy -- Tsai usually spends about two hours with each patient, she says. But just like the MS ride, it's a commitment that she won't soon give up. She plans to continue with both for as long as she can.

In 2008, Tsai's family honored her commitment by creating a team in the bike ride called "Team Eiko." Sim says17 riders, all family and friends "from all over the place," joined the team to participate in the ride, and returned this year. The 2009 City to Shore ride raised more than $5 million for MS research and care, and Team Eiko was responsible for more than $6,000 of that. Sim says his grandmother's determination is inspirational for both the other riders and the MS patients themselves.

"I think because of her personality and her demeanor, it really gives people hope. It doesn't matter who you are or where you're from, as long as you're persistent, you'll be able to come up with a cure," he says. "She's a pretty remarkable woman. And I'm just hoping the genes pass down."