(CNN) -- A national campaign to inoculate tens of millions of Americans against H1N1 influenza began Monday, with health care workers in Indiana and Tennessee targeted as the first recipients, federal health authorities said. 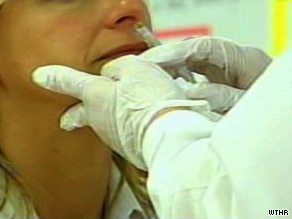 Health care workers in Indiana and Tennessee are among the first to receive the H1N1 vaccine Monday.

Earlier Monday, the hospital received a shipment of 52 boxes -- each containing 100 pre-filled sprayers.

"This first 5,200 doses that came to Marion County is really just the tip of the iceberg," Monroe said.

Health Director Virginia Caine said the shipment will be split among the county's hospitals.

A similar scene unfolded at LeBonheur Children's Medical Center in Memphis, Tennessee, where three children have died from H1N1, sometimes referred to as swine flu.

Jennilyn Utkov, a spokeswoman for LeBonheur, said the hospital received about 100 doses. By noon, the supply had been depleted.

The vaccines shipped to both sites and to a few other places around the nation are the first of some 195 million doses the U.S. government has purchased from five vaccine manufacturers, the Centers for Disease Control and Prevention's Dr. Jay Butler told reporters at the Indianapolis event. That number includes both spray and injectable forms.

Butler, who heads the agency's 2009 H1N1 Vaccine Task Force, has promised there will be enough for anyone who wants it.

Butler said vaccine makers will ship 10 million to 20 million doses per week over the next couple of months.

Monroe predicted that an ample supply of the injectable form will be available by mid-October.

Last week, the CDC said it had received reports of 60 deaths of children related to H1N1 flu since April; 11 of those deaths were reported last week alone.

From August 30 until September 26, the agency tallied 16,174 hospitalizations nationwide and 1,379 deaths associated with influenza virus infection. iReport.com: How should H1N1 be handled?

Nearly all of the viruses identified so far are H1N1, the agency said in a posting on its Web site.

"These viruses remain similar to the virus chosen for the 2009 H1N1 vaccine" and remain susceptible to antiviral drugs "with rare exception," it added.

Those who are at the highest risk of getting seriously ill -- pregnant women, children, young adults and people with chronic lung disease, heart disease or diabetes -- should be among the first to get vaccinated against the H1N1 flu virus, health officials have said.

According to a CNN/Opinion Corp. poll in late August, two-thirds of Americans said they plan to be vaccinated against H1N1 flu.

Health officials also have recommended people reduce their chances of getting sick by washing their hands frequently, sneezing into a tissue or sleeve rather than into one's hand and staying home when sick.

More than 340,000 laboratory-confirmed cases of H1N1 and more than 4,100 deaths have been reported to the World Health Organization.

Many countries -- including the United States -- have stopped counting cases, particularly of milder illness, meaning that the true number is likely much higher.